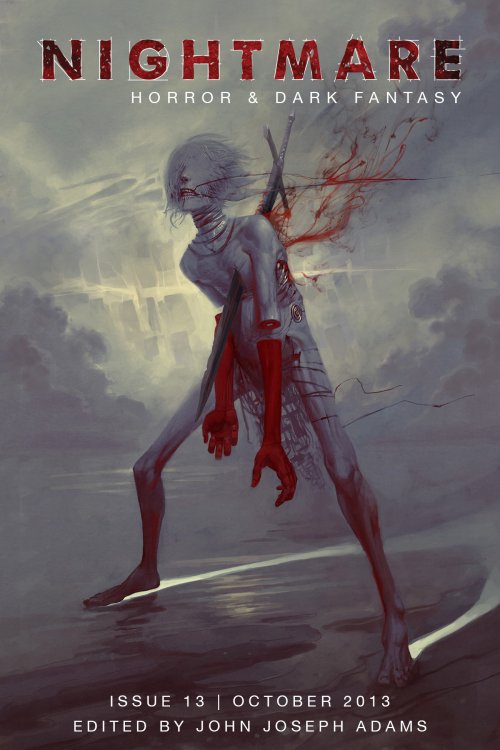 The boy isn’t very large. The way things are these days, he figures that’s a plus. He is less of a target at night, and for this reason he has come to trust the darkness. Strange to trust darkness in a world overrun with nightmares . . . but that’s the way it is.

Can you tell me a little bit about how “10/31: Bloody Mary” came to be? I’ve always loved post-apocalyptic stories, and I had an idea for a world where (basically) the things that go bump in the night crossed over one Halloween and took over. For me the best way to give that premise a […]

All You Can Do is Breathe

Stuart lay trapped underground for five days before the tall man appeared and stared into his eyes. He thought he sensed movement. Flicked on his caplamp. “Barry? Did you make it through the wall?” but there was no one.

In “All You Can Do is Breathe,” the long men seem to be siphoning off what makes Stuart a survivor, or maybe his will to live. What do they want it for? The long man represents the way we react to a survivor. We treat survivors as heroes, and exalt them for a while. We […]

The Revel is all, or almost all; the weight of the story, and of the reader’s experience of the story, is given over to the physical materials of the catastrophe: the bump in the night, the splat on the wall, the slaughter of the innocents, the razing of the town.

From the camp on the hill they could see everything, the river and the barn with its silos of molding grain, the hunting crows, and far to the west, in the square white farmhouse with its padlocked cellar door, the congregation of the Dead.

Peter Mohrbacher, a concept artist and illustrator working in San Francisco, is best known for his work on Magic: The Gathering, and is the Art Lead for Dragons of Atlantis. He’s been honored with work in Spectrum annuals 18, 19, and 20. He also offers a mentorship program for artists seeking to hone and develop their skills through a gauntlet of evaluations and feedback. He can be found online at vandalhigh.com, deviantArt, Facebook, and Tumblr.

The subject was first discovered dead in his holding cell the morning of March 18th in the “Tombs” Manhattan Detention Center. The subject was discovered with a rope in his hand, and so police at first surmised it had contributed in some manner to his death, but there are no consistent contusions on the neck or, indeed, anywhere else on the body.

Writers rarely achieve international and multi-genre renown on the basis of just one short story, but that was exactly what happened with Margo Lanagan and “Singing My Sister Down,” which appeared in her collection Black Juice (published by Gollancz in 2004 and HarperCollins in 2005). “Singing My Sister Down” is written from the point of view of a boy watching the slow execution of his sister, and is a spectacular example of how Lanagan’s work provides “a glimpse into weird, wondrous, and sometimes terrifying worlds” (from the starred review for Black Juice in School Library Journal). In 2008, her novel Tender Morsels defied easy categorizations, melding European fairy tales with her own brand of dark fantasy, and once again achieved extraordinary cross-genre success. She has since published three more collections (including Cracklespace in 2012), and the novel The Brides of Rollrock Island, which expanded an earlier novella, Sea Hearts. She is a native of Australia.