I normally tell my students beginning an essay with a dictionary definition is a cheap fix and they should try something else first. Nonetheless, I note the following definitions of “literature” from the Free Merriam-Webster Online Dictionary: “writings in prose or verse, especially: writings having excellence of form or expression and expressing ideas of permanent or universal interest . . . an example of such writings . . . the body of writings on a particular subject . . . printed matter.”

It’s a vexing, problematic word, both floor wax and dessert topping, to borrow from the early days of Saturday Night Live. It’s a qualitative judgment used both by narrow-minded elitists as a stick with which to beat the kind of writing that has been so central to my personal and professional life, and by equally narrow-minded folk as the brand name of the enemy. At the same time, it’s a term that can apply to, literally, any writing at all. (The example given for the “printed matter” definition above is “campaign literature.”)

To complicate matters further, anyone who’s spent ten minutes in a university English department over the past twenty years knows how much energy the profession has devoted to interrogating, critiquing, deconstructing, and generally turning inside-out any and all preconceived notions of what “literature” is. Three colleagues at my own university, English professors all, are currently writing books on examples of writing—personal correspondence, medical manuals—that no professor of my undergraduate days would have deemed even remotely “literary.”

Yet there they sit, “literature,” “literary,” shortcuts to all our preconceptions. What to do? In particular, what to do with the terms as they may be linked to kinds of writing some condemn, and others celebrate, as “nonliterary”: science fiction, fantasy, mysteries, and, for our present purposes, horror?

Well, I refuse to set up literary = good (or bad) and nonliterary = bad (or good). As a corollary, neither will you ever catch me using the odious phrase “transcends genre,” a favorite of those who can’t resist the preposterous notion that, once a work of genre fiction achieves a certain level of artistic excellence, it’s no longer a work of genre fiction. (By that same logic, once the United States abandoned slavery and gave women the vote, it was no longer the United States.)

What I will do is say a couple of things about form as it relates to content, and identify what I believe to be a key strategy that may mark some works of horror as more “literary” than others. (For those who believe form and content to be the same, that “language is narrative,” as Michael Moorcock so succinctly put it . . . Well, perhaps, but pulling things apart to try to understand how they work never prevents them from falling right back into place.)

In his introduction to the original horror anthology Phantom, Paul Tremblay suggests that form affects content, that what you say is at least in part how you say it: “The literary horror story aims to do more than shock, titillate, scare, or affect the reader . . . In using the elements of literary fiction—style, theme, setting, character—the literary horror story goes beyond the scare, beyond the revealing of some terrible truth . . . and asks the truly terrifying questions.” I might substitute “how it uses” for “using,” given that even the most artless work of fiction has a style, a theme, a setting, and something passing for character, but the point remains: using the formal elements of fiction in a certain way in writing horror fiction can yield results beyond the bump in the night or the splat on the wall. (This is, of course, the point at which too often the clerisy nod to Henry James or Shirley Jackson or Peter Straub or Kelly Link and start annoying me with talk of “transcending genre,” but never mind that for now.)

Defining a certain kind of writing solely with reference to formal strategies remains a slippery business and leads, perhaps inevitably, back to questions of hierarchy, the conviction that some things are just, well, better than other things. Not that there’s anything wrong with that. When the renowned literary theorist Gayatri Spivak declared that she didn’t believe in trying to prove the superiority of anything, I saw stretched before me the heat death of the universe and a place I didn’t really want to go. Still, one would like to find something within the events of the narrative, the stories themselves, that might signal a focus on (to go back to the dictionary) not only excellence of form, but interesting ideas.

To help in the search, I turn to John Clute’s The Darkening Garden: A Lexicon of Horror (2006), a brief, fascinating, frustrating, and useful text. Clute’s preliminary take on horror—a trial run of a promised much longer work—hasn’t gotten a lot of love from the horror community, mostly on the grounds that he overly privileges supernatural horror, and that his exemplary texts are narrow and eccentric. But, as John Langan argues in his superb analysis of Clute’s discussion (which can be found at depauw.edu/sfs/birs/bir103.htm), Clute’s basic framework has much to offer.

Briefly, Clute suggests that horror stories work through a four-stage process: Sighting, an initial vision of the horrific events; Thickening, in which the horrific events develop and start signaling what’s to come; Revel, when the horror arrives and does its work; and Aftermath, where any survivors survey the wreckage and realize that it will never be reassembled. Or, even more briefly: 1. Something’s wrong. 2. Here it comes. 3. Omigod! 4. We’re screwed.

Now, this doesn’t universally apply to all horror stories any more than any other structural schema universally applies to all of anything. But it works a lot of the time, with a lot of stories, and I would argue that how an author represents the Revel may be an indicator of the degree of his or her “literary” intent. Specifically, that in one type of horror, the Revel is all, or almost all; the weight of the story, and of the reader’s experience of the story, is given over to the physical materials of the catastrophe: the bump in the night, the splat on the wall, the slaughter of the innocents, the razing of the town. In another type, the Revel is deemphasized, perhaps even implied, maybe absent altogether. Or, to use Clute’s terms, the story Thickens into the Aftermath without an intervening Revel, and the beating bloody heart of the story is the Vastation, “the defining expression of the malice in the world.”

This is not to say that a work of the second kind—oh, I’ll say it, a work of “literary horror”—might not contain extremes of violence, as any number of writers from Clive Barker to Joyce Carol Oates have demonstrated. Even as Tremblay justifiably denounced the low-rent gorefests promoted “by websites with names like StabbyStabStab.com,” three years earlier, mainstream author Chris Adrian published in the mainstream magazineZoetrope: All Story an extraordinary horror story, as “literary” as they wanna be, titled, simply and eloquently, “Stab.” But the stories I’ve read over the past several years, “literary” and otherwise, have convinced me how an author handles the Revel is as key an indicator to “literary” intent as how he or she handles character, style, or theme.

As an example, I offer, with apologies to Professor Spivak, one of the very best horror stories I’ve read in the past decade: George Saunders’ “The Red Bow,” originally published in Esquire in 2003 and included in the author’s 2006 collection In Persuasion Nation. The story is narrated by the father of a little girl who has been killed by a dog that is itself victim of an infection that has caused the town’s animals to become violent. No explosions, no splatter, no real Revel—just the pitch-perfect voice of an average person barely able to articulate his own grief as he witnesses, and accepts with gratitude, the steps his town takes to deal with the situation, each step more extreme than the last. The story shows not only what a frightened group is capable of, not only what grief will lead individuals to accept, but also how inadequate language itself is to convey either the fear or the grief.

And if that seems too heavy, too calculated, too final-exam for you, trust me: “The Red Bow” is one of the creepiest stories I’ve ever read.

The issue, like all issues related to reading and writing, is unlikely to be resolved. “Literature” and “literary” aren’t going anywhere, much as I might like them to. So be it. If these observations are of any use to anyone interested in these issues, I’m more than gratified. But even if you agree with novelist Lauren Goff (The Monsters of Templeton, 2008), whom I recently heard say on a panel at a writing conference, “Why do we have to make these rigid distinctions between ‘genre’ and ‘literary’? Why can’t we all just try to write good stories?”—take heart. There are plenty of good stories to be had. Try any of the writers I’ve mentioned above. Better yet, take a look at the work of brilliant young writers such as Nadia Bulkin or Tamsyn Muir, who sometimes Revel and sometimes don’t, but always use to maximum effect all the devices of fiction—which are, after all, there to be used—to ask the truly terrifying questions, to go beyond the scare, to confront the malice of the world. 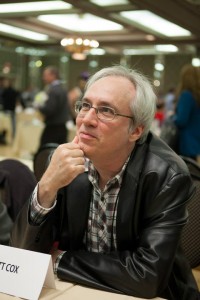 F. Brett Cox’s fiction, poetry, essays, and reviews have appeared in numerous publications. His most recently published short story, “The Amnesia Helmet,” is available at Eclipse Online. A new story, “Maria Works at Ocean City Nails,” is forthcoming in New Haven Review. With Andy Duncan, he co-edited the 2004 Tor anthology Crossroads: Tales of the Southern Literary Fantastic (that word again…) He serves on the Board of Directors of the Shirley Jackson Award. Brett is Associate Professor of English at Norwich University. A native of North Carolina, Brett lives in Vermont with his wife, playwright Jeanne Beckwith.