We have original fiction from KT Bryski (“Tiger’s Feast”) and Kurt Fawver (“Introduction to the Horror Story, Day 1”), along with reprints by P. Djèlí Clark (“Night Doctors”) and Thana Niveau (“White Mare”). We also have the latest installment of our column on horror, “The H Word,” plus author spotlights with our authors, and a feature interview with Alma Katsu. 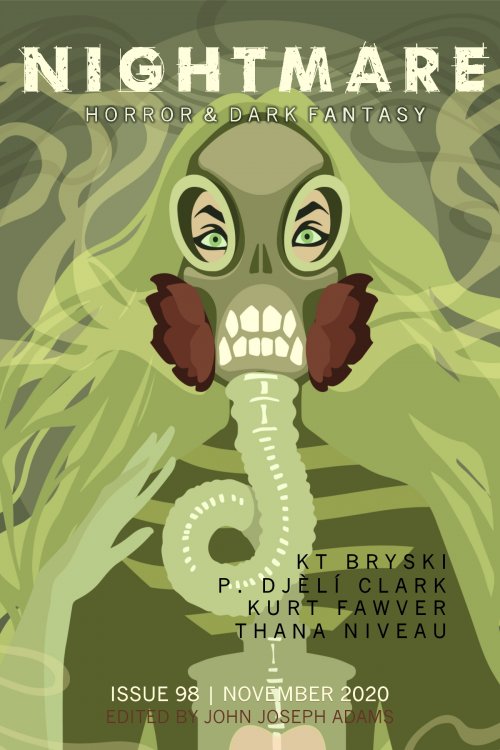 Be sure to check out the editorial for a rundown of this month’s chilling content and for all our news and updates.

Every day after school, Emmy feeds the tiger with her sin. Deep in the park’s brush, past poison ivy and a rotting lawn chair and dented beer cans, the tiger dens under a dead tree. No matter what time Emmy arrives at the park, it’s always late afternoon in the tiger’s grove, tired light decaying to dusk. Under the tree gapes a great black mouth riddled with grubs. Yellow eyes gleam in the darkness. They would gobble Emmy up if she let them.

One of the best writing lessons I’ve learned (from the inimitable Elizabeth Hand) is that every word ought to punch above its weight. As you point out, it’s never just description. Ideally, every word pulls triple-or-quadruple duty. It’s setting, plot, character, theme, mood . . . all at the same time. Sometimes, it’s not possible, but I try to hang onto the principle.

My arrival in Durham comes on a sweltering August afternoon in 1937. I am here on work with the Federal Writers’ Project, tasked to conduct interviews of former slaves, to collect their stories, memories, and folkways, as that generation is daily dying out and will soon reach its end. Securing lodgings comes with its usual difficulties, as Jim Crowism is as rampant in this city as any other in the South.

Haunted houses are places associated with endings—the end of a life, the end of a family. I wrote a story about haunting once. Called “The Knife Orchard,” it was based on a piece of family history when my mother, as a little girl and just come back from Sunday school, saw her mother being threatened with a knife. By her father. My grandparents. One was Irish Catholic, one an Irish Protestant. The problem was Sunday school; the knife a solution to going back.

Introduction to the Horror Story, Day 1

Welcome to Introduction to the Horror Story. This is an upper level course with extensive reading and writing assignments as well as a practical component. It has no prerequisites other than existence and consciousness, which I believe all of you possess, though I may be wrong.

I’ve written several stories that are grounded in the academic world, either through plot or narration or setting. The contemporary idea of school is inherently a chaos unto itself, and there’s so much mystery in knowledge, so much potential for the unknown, the arcane, and the incomprehensible to rear their heads in learning, that the academic world lends itself to horror.

April was the cruelest month for grownups, but for kids it was definitely September. The wild ride of summer came crashing to an end and the return to school was like being dragged back to prison after weeks of freedom. Heather had never minded, though, because September gave way to October. And October was her favorite month. The air turned crisp and the leaves were at their most vibrant and colorful. And best of all, there was Halloween.

Alma Katsu found success as a writer after a long career as an intelligence analyst. Her first novel, The Taker (2011), gave birth to a series (the Immortals Trilogy), but her real breakthrough came in 2018 with The Hunger, a reimagining of the doomed Donner Party as the victims of supernatural forces. The Hunger won both praise and awards (in the suspense, horror, and western genres), and made numerous “best of the year” lists. Katsu followed that book up in March 2020 with another historical horror novel, The Deep, which weaves together the tragic fates of both the Titanic and its lesser-known sister ship the Britannic.