Haunted houses are places associated with endings—the end of a life, the end of a family. I wrote a story about haunting once. Called “The Knife Orchard,” it was based on a piece of family history when my mother, as a little girl and just come back from Sunday school, saw her mother being threatened with a knife. By her father. My grandparents. One was Irish Catholic, one an Irish Protestant. The problem was Sunday school; the knife a solution to going back. Such are the legacies of colonialism. Any hope of Mum being raised a good Catholic girl died that day. These things reverberate through families in unexpected ways. In our case, the reverberation was freedom. My mother and my sister and I . . . we’re not that sorry. My grandmother’s religion was poison. It did nothing but make her miserable. An old woman on her deathbed, she wept with the fear of hell.

That knife worked out well for us, and isn’t that a terrible thing to say.

But a good inspiration for a haunted house story, I thought, one shot through with mothers and daughters and mothers of daughters. And, having an undying love for haunted house stories anyway, I began to notice just how often women held the central place in that narrative. If haunted houses are places of women and generations and endings, they’re also places of identification, where the haunted woman and the haunted house come to ever more closely resemble each other. In this there are similarities to stories of horrifying motherhood, particularly stories that center around pregnancy and treat the womb as a place of monstrous inhabitation. But that’s another argument altogether, because here I’m interested in other ways that women’s bodies come to mimic haunted houses.

Two stories of particular interest here are “The Yellow Wallpaper” by Charlotte Perkins Gilman and White Is for Witching by Helen Oyeyemi. It’s notable that both these stories also include, in their protagonist, a mental illness specifically linked either to maternity or to the maternal line. If horror is the genre of destabilisation, then this added layer of imbalance, linked to an already threatening home or biology, further undermines the ability of the protagonist to successfully navigate their own haunting. (I’ll spare you my atheist thoughts about how any religious belief that can send a grown woman into misery and terror is also indicative of imbalance.)

Anyway. Gilman’s struggle with postnatal depression is the famous inspiration for “The Yellow Wallpaper,” in which the unnamed main character and her family rent a house for the summer. She immediately describes it as being both haunted and strange, and in fairness the nursery fits neatly into every disturbing preconception of every haunted house ever. It has bars on the windows and rings on the walls; the wallpaper is patchy and peeling. The furniture’s all battered, and there are scratches and gouges on the walls and floors, making the whole place look like insanity and trap. Our protagonist sees a lot of that creepy nursery. She’s confined there by her physician husband, and forbidden from all activity in an attempt to cure her of the depression that developed following the birth of her baby.

The enforced idleness of this supposed rest cure, however, tips postpartum depression straight into psychosis, and she begins to see other women trapped within the walls of her room—“Sometimes I think there are a great many women behind, and sometimes only one, and she crawls around fast, and her crawling shakes it all over.” Her obsession with the wallpaper is partly that it seems to act as jail and confinement, preventing the other women trapped within the walls—as the protagonist is trapped—from escaping. Increasingly, her isolation is spent ripping that paper off the walls . . . at least, that’s what the narrator claims.

When her husband finally breaks down the door she’s managed to lock he faints at the sight of her, and while home renovation can be shocking, it’s not that shocking. The stripping of the wallpaper can be read as the protagonist stripping herself of skin, an act of self-flaying that identifies her own skin with the skin of the house she immediately perceived as haunted. In scraping the wallpaper from the walls, she’s able to free the ghostly women she sees within the walls of the house, and in scraping her own skin from her flesh she is (presumably) able to limit the ability of that flesh to house future destabilising inhabitants of its own. I think we can safely say of the protagonist, after the events of “The Yellow Wallpaper,” that there will be no more babies for her. The damage is so extensive that even her smug fucking husband has finally bought a clue, and given his past behaviour, he seems wholly unequipped to do anything but dump his newly-skinned wife in the nearest asylum and be done with her.

White Is for Witching, published nearly 120 years after “The Yellow Wallpaper,” does not take postnatal depression for its theme. The protagonist, Miranda, is a teenage girl affected by pica: the compulsive desire to consume items that are not food. This has led to severe weight loss and hospitalisation, but it’s also a family condition, and her grandmother and great-grandmother are shown to suffer similarly. Her father and twin brother are unaffected; this is an illness clearly linked to the women in the family, and it is an illness exacerbated by the house in which they live.

That house, sentient, has its own perspective woven into the novel. Uninterested in the male characters, it hoards the bodies and spirits of the women that inhabit it, and it’s particularly invested in their experiences of pica. “Miranda can’t come in today Miranda has a condition called pica she has eaten a great deal of chalk—she really can’t help herself—she has been very ill . . . . she is stretched out inside a wall she is feasting on plaster she has pica,” it states, gleeful at the thought of enfolding her as it has enfolded all of her mothers. Notable here is the phrase “feasting on plaster.” Miranda’s favourite thing to eat is chalk. She’s almost constantly gnawing on it, hiding little stashes in her pockets and her bedroom like some even more non-nutritious and disgusting Edinburgh rock. (Seriously: that stuff is vile. How a nation that produced butter tablet lowered its confectioners to Edinburgh rock I don’t know.) But back to the topic. Chalk is neither plaster nor plasterboard, but all three have the same primary ingredient: gypsum. When Miranda gorges on chalk, therefore, she can also be said to be consuming, at a remove, the haunted house in which she lives. (This is a good time to point out that the protagonist of “The Yellow Wallpaper” at one point was even biting the wallpaper off; who knows what she actually swallowed during the attempt, but it was likely high in protein.)

Chalk, like wallpaper—if it was wallpaper—has no nutritive qualities. Massive consumption of it makes Miranda even sicker. She returns home from her first term at university paler and more fragile than ever, and the house is delighted at her appearance, enamoured by her sickness. “She looked so beautiful. Tiny. Immaculately carved; an ivory wand.” Malnutrition has affected her eyesight and her steadiness, her ability to walk, and so the house caters to her, cosseting: “I depressed my floors for her, made angles of descent that led her across the hallway and through my rooms and up my stairs with the decisiveness of someone who could see properly.” The house realises that she is severely ill and in need of hospitalisation, but is unwilling to let her go, asking “what would have become of her beauty then?” The idea of home as a nurturing place is thoroughly subverted by haunted house stories, and here that subversion is critical. The house does nurture Miranda, but in very specific ways, and only in service of her transformation to something more like itself.

The phrase “you are what you eat” is common enough, but Miranda’s reluctant, conflicted absorption into the house is made easier by her previous consumption of its parts. The gypsum chalk has helped to align their natures, and by taking it into herself—as the house has gypsum plaster as part of itself—her identification with it cannot help but increase. It’s no wonder that the house describes her as “stretched out inside a wall [and] feasting on plaster,” as by her consumption her body has come almost to mimic the structure of that wall in flesh. The hereditary condition passed from mother to daughter, in a house that contains the ghosts and relics of all those mothers, all those daughters, has linked women’s bodies to structure in the same way as “The Yellow Wallpaper.”

If this were an essay as structured as those stories, I’d end with an anecdote from “The Knife Orchard,” in which the first person narrator, standing in for yours truly, notices in her own body the long reach of kitchen knives. Well, she doesn’t. That haunting ends when she tells her grandmother’s ghost that she doesn’t care about all the long nights that her grandmother must have spent dreaming of sharp edges and things that could sever, haunted by the memory of a house made less safe than it was.

Some houses are easy to walk away from, and easier still when imprinting on them doesn’t leave its mark in flesh. It’s no use trying to adapt yourself to them. Some houses are just not meant to be mimicked. 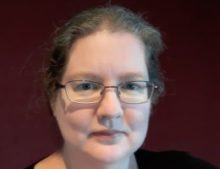 Octavia Cade is a New Zealand writer. She’s sold over 50 stories to markets including Clarkesworld, Asimov’s, and Shimmer. A recent novel, The Stone Wētā, was published by Paper Road Press, and her first collection, The Mythology of Salt and Other Stories, came out in 2020 from Lethe Press. Octavia attended Clarion West 2016, and was the 2020 visiting writer at Massey University. She is an HWA member and Bram Stoker nominee.