This month, we have original fiction from Sam J. Miller (“57 Reasons for the Slate Quarry Suicides”) and David J. Schow (“A Home in the Dark”), along with reprints by Connie Willis (“Distress Call”) and Conrad Williams (“The Owl). We also have the latest installment of our column on horror, “The H Word,” plus author spotlights with our authors, a showcase on our cover artist, and a feature interview with master of horror Joe R. Lansdale. 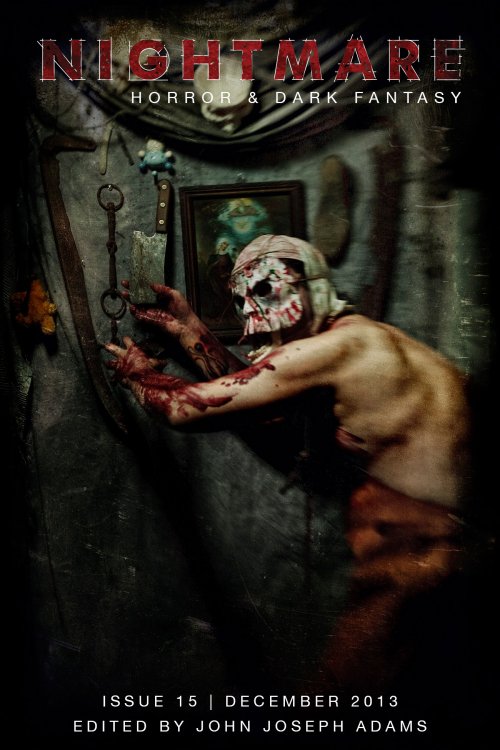 This month, we have original fiction from Sam J. Miller (“57 Reasons for the Slate Quarry Suicides”) and David J. Schow (“A Home in the Dark”), along with reprints by Connie Willis (“Distress Call”) and Conrad Williams (“The Owl). We also have the latest installment of our column on horror, “The H Word,” plus author spotlights with our authors, a showcase on our cover artist, and a feature interview with master of horror Joe R. Lansdale.

57 Reasons for the Slate Quarry Suicides

1. Because it would take the patience of a saint or Dalai Lama to smilingly turn the other cheek to those six savage boys day after day, to emerge unembittered from each new round of psychological and physical assaults; whereas I, Jared Shumsky, aged sixteen, have many things, like pimples and the bottom bunk bed in a trailer, and clothes that smell like cherry car air fresheners, but no particular strength or patience.

Caroline was not in the room. Amy could hear her crying somewhere down the hall. Her crying sounded louder, as though some other, all-pervading sound had suddenly ceased. “The engines have stopped,” Amy thought. “We are dead in the water. Something has happened,” she thought. “Something terrible.”

Walk continuously around a tree with an owl in it: the owl will keep its eye on you until it has wrenched off its own head. He couldn’t remember where the words had come from, but he knew they were old and the last time he had heard them he could have been little more than five years of age.

Łukasz Jaszak is a thirty-six-year-old self-taught photographer and graphic designer living and working in Krakow, Poland. He made his start in this dark discipline when approached to do album art for a friend’s metal band, eventually doing work for acts like Blood Red Throne, Decapitated, The Vision Bleak, Vomitory, and Behemoth. A visual perfectionist who enjoys making something from nothing, Jaszak cuts no corners: for his photoshoots, every item is carefully selected or created, right down to building his own sets and performing taxidermy for animal props. This stringency aside, Jaszak does not force himself to produce, but waits for his twisted muse to come to him. His work can be found at www.jaszak.net.

A Home in the Dark

We didn’t even notice the calamity and probably slept through it. If a luxury liner takes on a little water, that’s not news; if the ship keels over or sinks, that’s news. If a racecar driver whined to national media about a slight rear-end shimmy at 180mph, he’d be laughed out of the pit, whereas if he crashed and made a fireball, it would be noteworthy on the old daily feed. Most Southern California quakes are akin to one misstep while strolling.

Few writers can authentically claim to be their own distinct genre, but there’s no question that Joe R. Lansdale is a category unto himself. He’s written award-winning horror, mystery, suspense, westerns, graphic novels and comics, media tie-ins, screenplays, and mainstream literature, yet each new work fits recognizably into the East Texas-slang-filled, fast-paced, fluid storytelling style that defines the Joe R. Lansdale genre. His most recent works include the novel The Thicket (which critics have compared to some of Mark Twain’s books), and the feature film Christmas With the Dead, which Lansdale’s son Keith adapted from Joe’s short story of the same name (Lansdale also served as producer on the film). Lansdale’s novel Cold in July has also recently been adapted into a movie starring Michael C. Hall, Don Johnson, and Sam Shepard.