Nothing has changed except the scenery.

Great storms lashed the East this spring, followed by unseasonably hot weather, lending this region the lush vibe of a temperate jungle. The mighty cicada host known as “Brood Two” awoke from its seventeen-year slumber and took over the world. Trillions of cicadas bored through dirt and leaves to emerge here in the Hudson Valley. Out there in the green and the dark, the insects trilled, their communal song rose to an agonizing pitch on the decibel register. For a time, it was an alien universe beyond the back deck of the house. That relentless song ceased every evening, but continued to echo in my dreams, shaping them. And come the dawn, the song resumed. Day after day for over a month so the cycle went, until one morning a hush fell over the nearby woods. A hush interrupted only by faint birdcalls, the rustle of leaves shifting against one another, indifferent to the annihilation of Brood Two.

Death, in manifold forms, swept up innumerable flickering insect souls, and bore that light into the green and leafy graveyards that surround our toy model constructs. Weeks later, I walked among the withered carcasses of the cicada host. Hollow shells crunched beneath my tread. Reek and rot had diminished to a hint of perfume on the night breeze. I thought, this could be us. One day it will be us.

What I believe to be true of horror is that it inevitably comes around to death. Death in the physical mortality, death of innocence, disintegration of moral constructs, erosion of sanity, physical transformation—either sub or posthuman. But where does it all go, the energy matrix that animates us? Into the ground, into the water, maybe into the zero vacuum of space or the maw of a black hole. What’s around us is merely a reflection of what lies within us writ large as mountain ranges and star fields.

I’ve long considered setting to be a critical element of horror and dark fantasy literature because a well-drawn location amplifies mood and atmosphere, secondary characteristics that are vital to such tales. So much of horror and the weird depends upon the architecture and the lay of the land, whether the action occurs within a haunted mansion or the bowels of a cavern. X marks the spot, and if that spot intensifies isolation or engenders dislocation or estrangement from civilization’s normative state, then so much the better.

Horror is a primitive nerve. My personal bias leans toward the wilderness and its raw, flensing majesty, its implacable reality that transcends human pretense of superiority, if not negating our perceived significance. In the right hands, the landscape is of greater consequence than a mere backdrop, it becomes a character or an antagonist.

This is exemplified in the classic short story by Jack London, “To Build a Fire,” wherein the man succumbs inexorably to the cold as his dog looks on, and all round this pair looms a vista of ice and snow and trees silent as death. Then there’s Hyboria, stomping grounds of Robert E. Howard’s infamous barbarian and the crucible of Conan’s transformation into a steely-thewed killing machine: home of weird beasts and weirder civilizations. Consider the alien river islets of “The Willows,” and the frigid outlands of “The Wendigo” by Algernon Blackwood. Or the godsforsaken moonscapes of the deserts of Mexico as indelibly imprinted upon our hind brains by Cormac McCarthy, and the lashed and seared post-apocalyptic nightmare vistas of his epic The Road.

The characters in these tales are important, but they are challenged and illuminated by the landscapes they tread. Conan bursts from the wilderness to master the settled lands with his savagery; the hunting party in “The Wendigo” is illustrative of how the primeval world waits to swallow mankind whole; and the father and son bear witness to the fall of civilization and the revealed primacy of the devouring universe as they trek The Road.

It is the landscape that dominates. It is the wilderness that defines.

In the course of preparing an essay, I revisited “The Wendigo” a few years ago. The fires of summer were dwindling, and nights grew chill in my quiet neighborhood on the farmland outskirts of Olympia, Washington. It is a region of big old fir and maple, pocked by lakes and swamps, and even my suburban street lay beneath a mantle of primeval force during the long hours after midnight.

I read Blackwood and also Karl Edward Wagner, that master of the rural horror story, as the winds came out of the north and the great limbs of the trees creaked and groaned along the black street and the rain slapped the glass of my office window. And I considered the many times I’d bunkered down in a tent or under a simple tarp back in the days of my youth, when my travels took me through the wilderness as a matter of routine. This experience revived in me an awareness that during my youth I’d lived for many years with an unconscious, but ever present, fatalism.

There were dangerous animals, treacherous ice, and blizzards to contend with; my own flawed preparation, the naïve sense of invincibility we possess as young adults. All these presented the potential for serious mishap, as did encounters with the occasional fellow traveler, for not everyone in the wilderness is well met. The fatalism crept in over time, after I’d survived a blizzard by virtue of dumb luck. I’ve carried it with me ever since, like a talisman against the dark.

Men and the works of men are tiny things against the backdrop of the terrestrial wilderness, and but specks lost in the cosmic gulf that yawns between nictitating points of light. When attempting to make sense of the ineffable, to grapple with horrors fantastic or mundane, we’d do well to remember this.

For at least a decade after I departed Alaska, I experienced recurring dreams. In the most persistent of these, I walked across a plain of small stones and scrub brush toward a tiny cabin. The cabin was gray and decrepit. Its windows were smashed-in black sockets. As I trudged in shirt sleeves and tennis shoes, the sky darkened into iron. Snowflakes began to swirl around me; it froze upon my lashes and the cabin was lost.

I am often asked where I get my ideas, and since I’m a horror writer, I’m often asked with suspicion. It’s not an easy question to answer with a straight face. The clichéd question has become far more interesting to me of late because I’ve chosen to take it literally. Where indeed? When speaking of muses, we may speak not only of passion and logic, intuition and divine inspiration, but also of place, the Ur landscape of deep, primordial consciousness that lies in the ocean womb and at the heart of the earth, and, of course, within the human heart.

My chief muse is a pass through the Kaltag Mountains to Unalakleet in Alaska—a bridge between the Yukon and the Bering Sea. Many years have rolled by since my last visit, but I dream of that range often. The coldness, the shape and the darkness lie submerged in memory so that only the sonar of dreamtime ever really makes sense of its immensity. Other times I dream of the great immaculate and star-studded blackness that is a March night on the frozen Yukon River, or the ancient hills between Ophir and Iditarod where a handful of dusty snow can swirl to the empty horizon upon a gust of wind, yet moments later a hundred-strong herd of caribou might wheel over a ridge and thunder in a vast wedge of fur and hoof until it becomes a flickering shadow against the frozen sun.

It must be similar for anyone who dwells overlong in a region dominated by its geographical features. The contours of the landscape pattern the contours of your mind. As the comport of your mentors and authority figures impress your child’s brain, by osmosis do the vicissitudes of season and weather leach into your psyche and, as an artist, when you breathe life onto the sterile canvas, it is the blood of the beast, the howl of the storm, that is emitted. 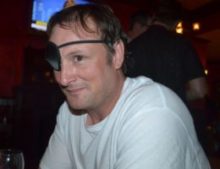 Laird Barron is the award-winning author of several books, including the horror collections The Imago Sequence, and The Beautiful Thing That Awaits Us All. His stories have also appeared in many magazines and anthologies. The novella “—30—” was recently adapted as the film They Remain.

His latest novels chronicle the saga of Isaiah Coleridge, a hard boiled detective featured in Blood Standard, Black Mountain, and the forthcoming Worse Angels; all published by G.P. Putnam’s Sons.

Barron currently resides in the Rondout Valley writing stories about the evil that men do.