We have original fiction from Kat Howard (“Returned”) and Christopher Barzak (“The Trampling”), along with reprints by Norman Partridge (“The Hollow Man”) and Lucy Taylor (“Blessed Be the Bound”). Over at “The H Word,” the Stoker award-winning writer Lisa Morton explores the state of female protagonists in horror. We also have an interview with legendary filmmaker (and now novelist) David Cronenberg. Plus, of course, we have author spotlights with our authors and a showcase on our cover artist, Tran Nguyen. 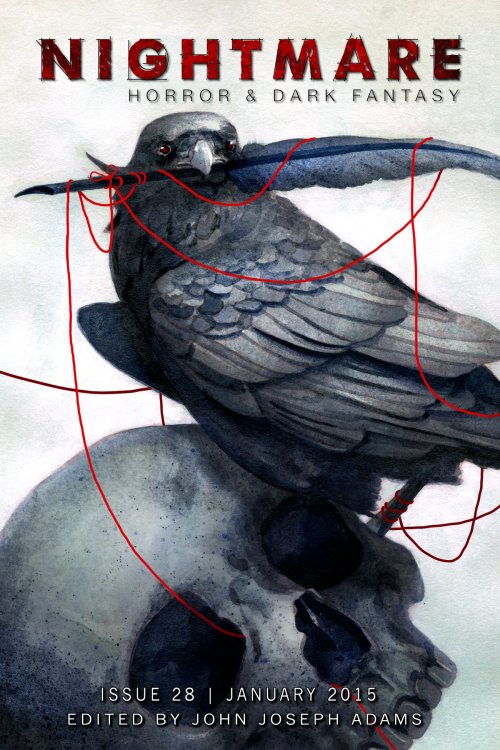 Read the Editorial for all our news, updates, and a run-down of this month’s content.

Four. Yes, that’s how many there were. Come to my home. Come to my home in the hills. Come in the middle of feast, when the skin had been peeled back and I was ready to sup. Interrupting, disrupting. Stealing the comfortable bloat of a full belly, the black scent of clean bones burning dry on glowing embers. Four.

Fortunately, horror fiction in the twenty-first century has expanded past those traditional roles (remember when the catch-phrase “You’ve come a long way, baby” referred to a cigarette targeted at women?). Along the way, the most interesting horror fiction has reflected society’s changing views . . . and in a few cases (see below), may even have helped push those changes.

It starts with a small child — a girl of no more than eight or nine, with stringy blond hair and grease caked under her ragged fingernails — trotting down a street in a not so fashionable district of London. It’s 1886. It’s nearly three in the morning, the night shrouded in fog. She’s barefoot and hungry, and back in the rooms she left just ten minutes ago, her parents have begun making up from the row they’ve just ended.

Tran Nguyen is a Georgia-based gallery artist and freelance illustrator. Born in Vietnam and raised in the States, she is fascinated with creating visuals that can be used as a psycho-therapeutic support vehicle, exploring the mind’s landscape. Her paintings are created with a soft, delicate quality using colored pencil and acrylic on paper. Nguyen has worked for clients such as Playboy, Tor, McDonald’s, Chateau St. Michelle Winery, and has showcased with galleries in California, New York, Spain, and Italy.

Blessed Be the Bound

The Binding takes place tomorrow at the Sisters of Solace Hospital outside Charlottesville, Virginia. From my bed, I can just see the peaks of the October hills, dappled maroon and scarlet. If I could lift my head, I’d be able to glimpse the wing of what was once a dormitory at the University of Virginia and now serves as a Confinement Center for the most violent prisoners/inmates, but gel compression restraints, deemed more humane by hospital staff than electro-loops, ensnare my wrists and ankles.

David Cronenberg is a Canadian filmmaker whose career has spanned more than four decades. Cronenberg’s many films include STEREO, CRIMES OF THE FUTURE, FAST COMPANY, THE BROOD, THE DEAD ZONE, THE FLY, NAKED LUNCH, M. BUTTERFLY, CRASH, A HISTORY OF VIOLENCE, A DANGEROUS METHOD, and COSMOPOLIS. His most recent film is MAPS TO THE STARS. In 2006 he was awarded the Cannes Film Festival’s lifetime achievement award, the Carrosse d’Or. His debut novel, CONSUMED, was published by Scribner in 2014.