This month, we have original fiction from Micah Dean Hicks (“Quiet the Dead”) and Rafeeat Aliyu (“58 Rules To Ensure Your Husband Loves You Forever”), along with reprints by Kelley Armstrong (“We Are All Monsters Here”) and Nick Mamatas (“The Glottal Stop”). In the latest installment of our column on horror, “The H Word,” Richard Thomas discusses new, exciting trends in horror films. Plus we have author spotlights with our authors, and a panel interview with some amazing women in the horror industry. 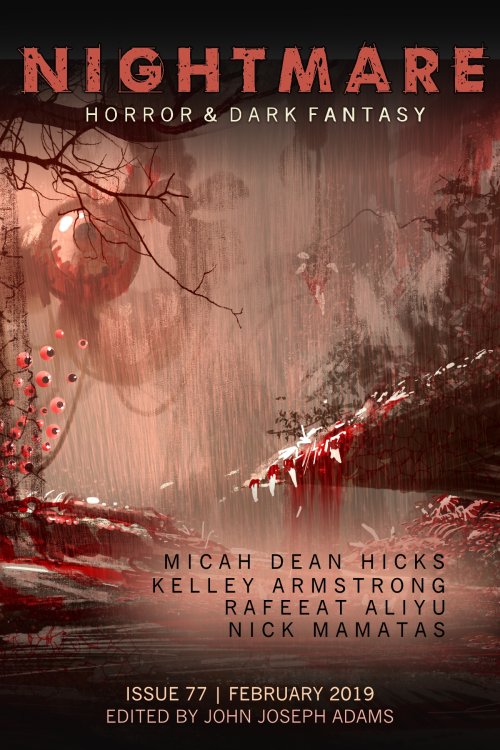 Be sure to read the editorial for a discussion of this month’s content and to get all our news and updates.

We Are All Monsters Here

So disappointing. After decades of movies and TV shows and books filled with creatures by turns terrifying and tempting, it was a guarantee that the real thing could never live up to the hype. We knew that. Yet we were still disappointed. When the first stories hit the news—always from some distant place we’d never visited or planned to visit—the jokes followed. Late-night comedy routines, YouTube videos, Internet memes . . . people had a blast mocking the reality of vampires.

Roundtable Interview with Women in Horror

To celebrate Women in Horror Month 2019, I asked four excellent female writers and horror experts to join me for a roundtable discussion. Given how the genre seems to be expanding rapidly to include more women at all levels of experience and publishing, I tried to gather a group of women with a range of talents and experience: Linda Addison, Joanna Parypinski, Becky Spratford, and Kaaron Warren.