The H Word: Zombies–They’re Not Just for Breakfast Anymore

We all know the drill.

A plague or a virus or some cosmic dust from a drive-by comet causes the dead or recently deceased to come back to proverbial life and feast on the living, more often than not creating a dystopian world of zombies and survivors.

Twentieth century zombies, who branched off from their Haitian voodoo brethren in 1968 with George Romero’s Night of the Living Dead, spent thirty-five years terrorizing audiences with their relentless pursuit of human flesh. If you think of them as a breakfast food, they were kind of like oatmeal. Or pancakes. Or scrambled eggs. Nothing fancy. No surprises. Just a basic monster with a single-minded purpose, so you always knew what you were going to get when you sat down to enjoy them.

But then came 28 Days Later in 2003, followed by Shaun of the Dead in 2004, then Fido in 2006, and before we were more than a handful of years into the next millennia, zombies were doing things they’d never done before. Like running. And engaging in slapstick comedy. And performing household chores. They even came back from the dead in 2005 to fight for their right to vote in the Masters of Horror episode “Homecoming.”

Now, nearly fifteen years after the turn of the century, zombies are no longer just the shambling, mindless, flesh-eating ghouls we’d come to know and love for three-and-a-half decades. Instead, they’ve been taken out of their proverbial mindless, shambling, flesh-eating box.

The movie theater has provided the largest stage for the transformation of the living dead from cult status to pop-culture icon. From 28 Days Later to World War Z, zombies have become tenacious and terrifying hunters, chasing down helpless humans like packs of ravenous, rabid cheetahs. At the same time, films like Shaun of the Dead and Zombieland prove that the living dead are natural-born comedians.

That’s a lot of range for a monster that used to be one-dimensional.

Not to be outdone by their cinematic counterparts, authors took up the rallying cry of the twenty-first century zombie and put their own fictional spin on the living dead mythology. In addition to the countless novels that explored the ruined landscape of the zombie apocalypse with updated themes, Zombie, Ohio and I, Zombie gave us zombies who can think, while Warm Bodies and Breathers showed that even though your heart stops beating, it can still ache.

But the modern-day zombie wasn’t just resurrected on the silver screen and in bookstores. The evolution of the Internet from dial-up to high-speed service in the mid-2000s gave birth to YouTube, which allowed entrepreneurial and creative minds without Hollywood credentials to change the way zombies are perceived by the general public.

In addition to running like Olympic sprinters, making us laugh, and fighting for their civil rights, modern zombies can be found on the Internet writing poetry, starring in music videos, and appearing on reality TV shows. They also attend marriage counseling, attempt to hold down day jobs, and stand in line at the DMV — dealing with the mundane existence of daily life while suffering from the indignities of their decomposing bodies. Like the emotional fallout of a rapidly digesting pancreas. Or the embarrassment of having a body cavity burst open on a first date.

In short, zombies have expanded their range. Developed new skills. Become less one-dimensional and more well-rounded. And who doesn’t enjoy a well-rounded zombie? Plus they’re tragically comical, shuffling along, losing their hair and teeth and nails and the occasional appendage. What’s not to love? Add in the fact that they used to be us — that we and our loved ones are just a hypothetical virus or brain parasite away from turning into a zombie — and we can’t help but relate.

Admittedly there are zombie purists out there who don’t want their zombies fast or funny or covered in candied walnuts or doing anything other than shuffling along mindlessly in search of human flesh. These are the fans who tend to get very Dr. Seuss Green Eggs and Ham about their zombies:

And there’s nothing wrong with that. Everyone’s entitled to like what they like and reject that which doesn’t fit their idea of what a zombie should be. But whether you prefer your zombies slow and relentless, fast and tenacious, or funny and self-aware, when it comes to modern-day monsters, zombies rule and vampires drool. Werewolves, too, for that matter.

Werewolves are like the jocks of the monster world. Full of testosterone and sprouting hair everywhere; all animal rage and bulging muscles; bursting through their jerseys and baying at the moon. If you think about it, werewolves are kind of dicks.

Vampires? They’re like frat boys. Full of themselves and primping and preening; all charm and seduction; trying to get you into bed so they can drink your blood. Even if they’re not sparkling in the sunlight, they’re total stalkers.

Zombies, on the other hand, don’t try to impress you with their immortality or their animal magnetism. They don’t have any ulterior motives. They don’t walk around pretending to be one thing while hiding behind the façade of humanity. They’re honest about what they want in a relationship. They wear their decomposing hearts on their sleeves and aren’t ashamed to say: “I’m a zombie and I want to eat your brains.”

They possess an unpretentious veracity. You have to admire that in a monster. 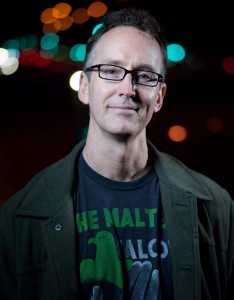 S.G. Browne is the author of the novels Breathers, Fated, Lucky Bastard, Big Egos, and Less Than Hero, as well as the novella I Saw Zombies Eating Santa Claus and the eBook short story collection Shooting Monkeys in a Barrel. He’s an ice cream snob, a Guinness aficionado, and a sucker for dark comedy. He lives in San Francisco. You can learn more about him and his writing at www.sgbrowne.com.