Three Symptoms of a Disaster

Parkinson’s and Alzheimer’s run in the family—both paternal grandparents had it, now my father, and it often feels like a neurological heirloom waiting for me. I wrote this poem after accompanying my father for his monthly Parkinson’s checkup and wanted to convey how surreal a doctor’s diagnosis can feel when it’s essentially telling you your body will eventually feel like a stranger.

They told you falling was the first symptom
so you stayed in your house,
wrapped a warm blanket around your shoulders
and pretended to be a bird.
Birds don’t usually fall, right?
They glide down, the angle of their wings
elegant as painted lines, and make
their home anywhere they please.

But what about the starlings
lined up along the sidewalk, their bodies the shape of birds
but their brains like empty televisions.
Why do we die like that? Intact except for a soul?
They say Steller’s sea cow went extinct because of an inability
to let the dead go, the hunters picking them off as they gathered
to mourn. How easy it always is, we thought,
to blame the dead.

They told you the second symptom was memory loss,
that pockmarked brain, those pretty
empty shelves that once held precious objects, those nerves
firing into dead ends, they tell you
it’s human to forget,
that insanity only happens when we can’t,
so you take the pills, you lie down
to watch the stars burn.

When the third symptom began, you didn’t need anyone
to tell you even if you walked to the edge of the platform
and called out to the train
no one would hear you

Catastrophe renders the living into history.
I could assemble you from these pieces
these lips like the sky and your neck
a valley where grief is a kite that never finds wind. 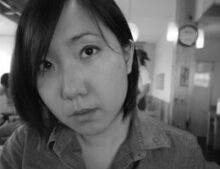 Angela Liu is a Chinese-American writer based in NYC and Tokyo. She studied mixed reality storytelling at Keio University’s Graduate School of Media Design. Her work is published/forthcoming in Strange Horizons, The Dark, and Fusion Fragment, among others. When not writing, she’s taming a kaiju-obsessed toddler and navigating the demonic world of IT consulting. She can be found on Twitter at @liu_angela.