The Girl with the Voice Made of Stone

This poem came about after reading more of Aileen Wuornos’ story and thinking of the ways society makes monsters out of victims. It is my first attempt at a dark fairy tale in verse.

climbed out of an abandoned car deep in a forest in Michigan after sleeping through another cold night alone. Her bones were stiff and she could feel winter dyeing its teeth in her bloodstream. She had no basket of food to deliver to her grandmother (who had recently died of liver failure). No wine or cake. No makeup to cover her facial burns or the frostbite scars on her hands and feet. She was homeless, although she lived with a pack of wolves sheltered in the feral white spaces of her skull. Her only possession was a single silver key without a lock. She made her way to her grandfather’s house nearby. She broke in through a window and found him sleeping in his bed. She could smell the alcohol on his breath and the soot in his lungs. She waited until he stirred before she screamed and watched his skin and eyes harden and turn the color of dry cement.

She had inherited a curse from her mother that, once activated by the touch of a man, turned her hay-blonde hair into an ecosystem of bats and bees and made the sound of her voice so hideous that any man who heard it turned into stone. Just one drop of her blood in the ocean was said to be enough to petrify seaweed, birthing new pink-red skeletons beneath the surface. With nicotine wings and pool cue claws, she drifted like marine snow and fell into the arms of older sinewy men. In Florida between 1989 and 1990, she murdered seven men by shooting them at point-blank range, turning their exit wounds into blooming red geodes. Their bodies were later discovered in the woods like naked terracotta warriors. Police found condoms, blonde hairs, and rubies in their abandoned cars. 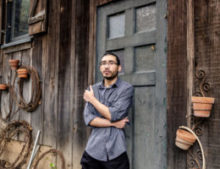 Anuel Rodriguez is a Mexican-American poet and freelance writer living in the San Francisco Bay Area. His work has appeared or is forthcoming in The Cincinnati Review, Glass: A Journal of Poetry, PANK, decomP, and elsewhere.