This poem is inspired by what I call “the miracle industry” in Nigeria, where pastors carry out exorcisms on their congregations. Because I have been taken to certain pastors to supposedly cast away demons inhabiting me, I thought of writing a poem mocking pastors who engage in that act.

I stood in the water wiggling my toes,
let it wash the grit from under my feet,
watched the dirt slowly bob to the surface,
dissolve, gradually turning the water
the colour of very strong oolong tea.
The water was too cold but I didn’t say,
The essence was far greater than the chill:
The diviner, a man who looked too young
to be communing with the ancestors,
claimed he could cleanse me of the spirit
of Death he had seen lurking inside.
He picked a bell and rang it so close
to my ears that the sound rattled me
and when I shook he proclaimed what he saw:
the demons making it out of the den
they had long made of my body.

He laughed. Sweat, like oil, poured from his chin
over my head as he pressed my nudeness
into the chilling water, my knees, my thighs,
until half my neck was immersed in it.
A song magnifying a strange God
tinkled out of his mouth and when I closed my eyes
I could not expel these images of dogs
galloping out of my body
like codes in contact with a virus,
until my body was no longer a den
but had become a desiccated husk,
but one of them would not let go of me,
I believe the diviner was that one. 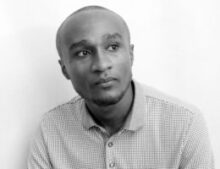 Okwudili Nebeolisa is an MFA candidate at the Iowa Writers Workshop where he is a Provost Fellow and won the Prairie Lights John Leggett’s Prize for Fiction. His poems have appeared in The Sewanee Review and Threepenny Review, are forthcoming in Image Journal, and have been nominated for a pushcart by Beloit Poetry Journal, The Cincinnati Review, and Salamander Magazine. His nonfiction has appeared in Catapult and Commonwealth Writers. He was first runner up for the inaugural Granum Foundation Fellowship Prize.