I was thinking about the power of Frankenstein not to raise the dead and become like god, but to redress the unjust nature of death (femicide in particular) to make god irrelevant. I was thinking about how not all women bear children, and some of us make people in other ways. How we all make each other. How we’re all riding the lightning, just staying alive. And then there was a poem.

Silver lady carries it in her closed mouth
nothing wasted
until she finds the right moment
a woman on the train with three small children
one every year and another coming
as worn out as the breaching crotch of her jeans
silver smiles and offers to hold the sleepy one
tells the mother she is beautiful
that it won’t always be this way
that she is enough and the world will wait
because an old woman can,
with authority, say these things

a mother of such an army speaks to few people she didn’t make
and so holds the lightning for a few days
using it to stiffen her spine
to stir sugar into her tea
and it is enough
so that the next woman she sees who needs it
spills it out of her like milk
on the worried woman in the drugstore
hands reaching out to cram alcohol into her basket
and gauze and gauze and gauze
someone somewhere is bleeding
(aren’t they always?)
and the mother tells the mother
it will be ok
they’re never as hurt as you think

blink and blink and blink
and maybe, the tired mother thinks,
maybe that one didn’t take
but truth lands and turns to something just as bright
something kin to the lightning
and it’s alive

tells her
it is enough, monster,
it is enough that your heart is beating again
life isn’t over because someone said so
holding you down in a bathtub
you were not used up
you have purpose still 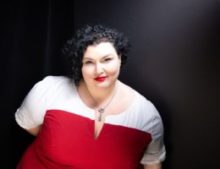 Meg Elison is a science fiction author and feminist essayist. Her series, The Road to Nowhere, won the 2014 Philip K. Dick award. She was a James A. Tiptree Award Honoree in 2018. She has been published in McSweeney’s, Fantasy & Science Fiction, Fangoria, and many other places. Elison is a high school dropout and a graduate of UC Berkeley. Find her online, where she writes like she’s running out of time, at megelison.com or at @megelison