As for the process of writing the piece—this was one of the pieces I wrote with fellow writers in a weekly writing session where someone gives a prompt and we each take an hour to create something. I have a fascination with the bubonic plague and fairy tales so I wanted to combine those elements. I got the idea of burying someone by a tree from the fairy tale, “The Juniper Tree.” My medical profession also helped in the making of this poem—since I’m a surgeon, I can actually say I’ve seen a couple of human hearts that really resemble fruit (specifically: oversized mangoes). What the children did in the poem was the incision for a median sternotomy, which is one of the ways you can access the cardiac box. Certain violin strings are made of the same components as a type of surgical suture—catgut, albeit it’s made of sheep intestine and not cats’.

When the autopsy was denied,
due to too few doctors and an overflowing

of bodies in the city, they sighed
in relief. Their mother’s favorite brooch lay

beside her hand bruised from the impact
of all twenty-four blows. No signs of forceful entry

or foul play noted. No writings on the wall. No body
fluids or footprints found to merit being called

evidence. She was likely last alive
between two to four in the morning. Always

the night wakes hunger, always the night,
never the morning—always the mourning, never

the light. The children were keen with their mother’s
instructions and so they took what remained of her body,

zipped in a bag and brought it back into their home, deep
into the woods, where the world was dimly-lit.

With a silver kitchen knife, they incised just right
above her breastbone, careful to avoid any wayward strokes,

as they had been taught
many, many times before. There were clumps of blood

within the cavity of her chest. Her eldest cracked
her sternum and unfolded her ribs open like a book.

They saw that her diaphragm was ruptured and underneath it peeked
a swollen spleen, purple to its pulp. The youngest child cupped

their mother’s puckered heart and tied off its vessels with strings
of an old violin. Then with the same knife, cut

the heart out like one would pluck a ripened fruit.
It was the size of a clenched fist, and they brought it

to their garden out back. They wrap it in a simple handkerchief
and along with her emerald brooch, bury it

under the roots of an old tree. At night, they push their ears
to the soft soil and listen. Their eyes light up

when they hear it: soft but certain. They sigh, begin
to laugh. Miles away, the city continues to pile up

bodies upon bodies—and what more is one other dead body
in a chorus of funerals? 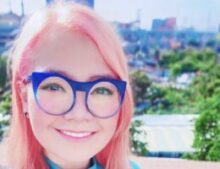 Alyza Taguilaso is a resident doctor training in General Surgery at Ospital ng Muntinlupa in the Philippines. She has been shortlisted for the Bridport Poetry Prize and Manchester Poetry Prize. Her poems have been published in several publications, including Fantasy Magazine, Strange Horizons,  ANMLY, High Chair, Stone Telling, and Kritika Kultura. She is working on her forthcoming book, Juggernaut. You can find her at WordPress @alyzataguilastorm or on Instagram as @ventral.