Field Notes from the Anthropocene

The imagery is from time spent in the woods, including in an area here with 14,000-year-old glacial soil deposits—how special is that, people clean up your garbage. Back then it would’ve been predominantly oak trees, but we now see a lot more maple, as well as other introduced species. The fireflies . . . the species here overwinter in the soil, so between light pollution and people deciding that leaf litter is unattractive, I don’t see them at my parents’ house anymore, even though they were common twenty years ago.

the dust of the empty streambed is
the dust of foxfur half-buried
in the dirt
jumbled hips and teeth and tail
jumbled acorns cracked open, waiting
for squirrels nibbling greasy meat
from overflowing trash cans
bags drifting among the algae
slime choking life from the edges
of the lake where shadowbirds
perch in trees and wail like cats
like children screaming for
belongings they were promised:
the trees in which they perch
are not the trees of their ancestors
but these roots dive the same depths
and the thousand fingers of fungus,
offspring of the last glacier’s soil
have learned how to blossom in
hollows full of leaves that melt
in rain and crisp in pale ribbons
—a blaze set by light
refracted through plastic scraps,
the fading memory of
what it was like
when we knew fireflies 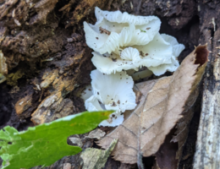 Priya Chand grew up in California and currently resides in the Chicagoland area. When she’s not reading or writing, she does martial arts, volunteers as a forest steward, and takes naps. Her poetry has previously appeared in Fantasy Magazine. Find her online at priyachandwrites.wordpress.com.