Every Night and All

I wrote this poem in a quarantine October; I wish the year that followed had made it a period piece. The title comes from the refrain of the “Lyke Wake Dirge,” which I learned as a child from the singing of Buffy Sainte-Marie [bit.ly/3iz1Lm3] and which has threaded through my own work ever since. Years after the fact, I discovered she was singing a variation on the classical arrangement by Benjamin Britten [bit.ly/3kHhOAV], but as much as I admire the eerie lilt of Peter Pears’ famously dry white tenor, less like the living waking the dead than one ghost calling another down, the old sistrum jangle behind Sainte-Marie terrified me in childhood and no amount of strings and horns can change that even now.

All crows look to me now
like plague doctors,
all drystone stacks like cairns,
waymarks of the dead.
How easy it used to be
to follow their gritty lanterns,
now the underworld too
has its quotas, its quarantines.
What a song we weave
like a parcel of patterns,
our breath the dark river
we sing each other down. 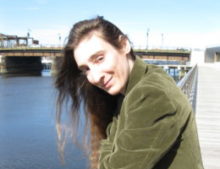 Sonya Taaffe reads dead languages and tells living stories. Her short fiction and Rhysling Award-winning poetry have been collected most recently in the Lambda-nominated Forget the Sleepless Shores and previously in Singing Innocence and Experience, Postcards from the Province of Hyphens, A Mayse-Bikhl, and Ghost Signs. She lives with her husband and two cats in Somerville, Massachusetts, where she writes about film for Patreon and remains proud of naming a Kuiper belt object.