The appeal of horror set “out there”

When I’m watching a horror film, I always know something good is coming when we step off the beaten path. We might be campers who trudge through the snow to a nearby cabin, going to push the door only to find that it creaks open of its own accord, revealing bad taxidermy and dangling fetishes which look disturbingly like they’ve been made from human teeth. We might be a team called in to investigate signs of distress at a remote outpost, coming in from the cold to find the temperatures similarly low inside, and an eerie stillness over the whole base. Or we might be impoverished and down-on-our-luck, with no other option but to spend winter looking after an eerie Mary Celeste location. Whatever the set-up, there’s always a line which both thrills me and makes me roll my eyes as I say it along with the characters: “what . . . is this place?”

It’s become similarly cliché to talk about the location of a piece of horror fiction as being “another character.” However, this type of location-centred horror (in which the horror is inextricable from place) has a firm hold over me, and I know I’m not alone. The last few years have seen the huge success of AMC’s The Terror (based on the novel by Dan Simmons) in which the crews of Sir John Franklin’s lost expedition are trapped in the deadly, unpredictable, inescapable ice of the Arctic. And some of the upcoming books I’m most excited about for 2022 offer a strong sense of horrors “out there,” from Christopher Golden’s Road of Bones (Siberia) to S.A. Barnes’s Dead Silence (an abandoned Titanic-like spaceship). Why, then, am I so fascinated by place—and particularly those snowy, remote, isolated places—as a component of horror?

Humankind has always felt the lure of the unknown. Researching my own novel, I found this “call of the wild” in the writings of early explorers, and Ernest Shackleton starts his The Heart of the Antarctic with a quotation so good I had to steal it: “. . . others again are drawn away from the trodden paths by the ‘lure of little voices,’ the mysterious fascination of the unknown.” For a horror lover, this fascination might bring to mind HP Lovecraft’s famous quote (noting Lovecraft’s racism and xenophobia—a very literal “fear of the unknown”): “The oldest and strongest emotion of mankind is fear, and the oldest and strongest kind of fear is fear of the unknown.” We want to see what’s out there even if, and possibly because, it scares us.

However, this begs the question of what is “unknown,” and whose perspective we approach from. I think it’s important to note the difficulty in extricating this type of horror from its roots in colonialism (hello, Joseph Conrad). The “unknown” which is often being explored by white protagonists might be the home of indigenous people who are demonised, exoticised, or written out of the narrative entirely; perhaps, then, some of the appeal of space horror is that it presents a literal blank canvas without any of the genocidal implications. However, some of my favourite narratives also critique this urge to “discover”: attempts to dominate a remote Antarctic island, for example, are rebuffed in Albert Sànchez Piñol’s Cold Skin, an intelligent look at mankind’s relationship with “The Other.” Piñol’s nuanced and ambiguous Innsmouth-esque sea-denizens (a welcome counterpoint to Lovecraft) prove far less disturbing than the violence and rage occupying the human mind.

This idea of something ancient and hostile which persists at the frontiers of our “civilized” world has been a rich vein for writers from Algernon Blackwood (The Wendigo) to Dan Simmons (The Terror). To my mind, it’s no accident that both deal with predominantly white expeditions coming into the territory of a supernatural force: a place which is off-limits to humankind, but particularly off-limits to colonisers. While Blackwood—though a master of his craft—disappointingly depicts the Natives in his story as credulous and weak-minded, the tuunbaq of The Terror is at the centre of a finely-balanced indigenous belief system and respect for the natural world. And, whatever the author’s views on climate change may be, it’s a novel which finds horror in the rapacity of Western civilisation, which—with the incursion of the white people on the tuunbaq’s domain—will ultimately lead to the heating and thawing of the Arctic, the collapse of its ecosystem, and ruin for the Real People.

The same rapacity, in the form of “Manifest Destiny” (the doctrine that American colonisers were entitled to the North American continent) is represented via the cannibal appetites of the Wendigo (part of the traditional belief systems of a number of Native peoples) in both Alma Katsu’s The Hunger and Antonia Bird’s Ravenous. There are some places where location-centred horror shows us that trespass and greed will be punished by whatever calls that place home. And, on his second unsuccessful attempt on the South Pole, even Ernest Shackleton couldn’t shake the feeling that they were intruding on something both sacred and hostile: “It is as though we were . . . bursting in on the birthplace of the clouds and the nesting-home of the four winds, and one has a feeling that we mortals are watched with a jealous eye by the forces of nature.”

Or is it that the place itself rebuffs us? When the Torrance family arrive at the Overlook Hotel in The Shining by Stephen King, what they see is an isolated, somewhat crumbling, and besieged by winds, but otherwise ordinary building. However, over the course of the novel it’s slowly revealed that what they’re occupying is something half-way between a wasps’ nest and the swarm of wasps itself. The hotel is sentient, and attempting to assimilate or destroy them. This absolute classic of location-centred horror is on the same genre continuum as Shirley Jackson’s Hill House or Paul W.S. Anderson’s Event Horizon, but I also caught flashes of this idea of a malevolent landscape or genii locorum in the way Shackleton sometimes felt that the Antarctic was toying with him: “Just before we left the glacier I broke through the soft snow, plunging into a hidden crevasse . . . It seemed as though the glacier were saying: ‘There is the last touch of you; don’t you come up here again.’” Perhaps that’s even scarier than a “thing” which awaits trespassers into its domain: while we can blow up a research station or a hotel or a spaceship, we can’t hope in any meaningful way (on an individual scale—climate change, as mentioned above, provides one exception) to overcome a landscape. There are some places which have the inherent power to overwhelm us, whether our human bodies or our minds, and there horror lies.

One of the promises of location-centred horror is that of vicarious thrills, comfort, and a healthy dose of schadenfreude to those tucked up at home: I haven’t gone “out there,” so I must be safe in here. But the distinction isn’t so readily drawn; it’s often our own internal quirks and flaws which render us particularly vulnerable in these borderland places. They might be proto-monstrous qualities, like Jack Torrance’s anger and alcoholism. They might be special gifts and abilities, like his son Danny. Or, closer to home, they might be the everyday bundle of personality traits and flaws found in any group of people. One of the joys of John Carpenter’s The Thing is its depiction of group dynamics: the mistrust, selfishness, and thoughtlessness of those at Outpost 31 combine with the Thing itself to create an existential threat to this microcosm of humanity, and beyond. And once the sarcophagus is open in Ararat (Christopher Golden), it’s the secrets and fears of the group of researchers—cunningly drawn out and exploited—which may allow the demonic presence to escape down the mountain.

While it might be tempting, therefore, to see horror set in these remote places as saying little about the here and now, we can’t get away from our own selves. The battles we have to fight on an everyday basis are not too different from those we see depicted “out there”: loneliness, fear, grief, guilt, and anxiety. Of course, they’re not any smaller for being internal, and come to most of us in time, whether adventurers or not. As British explorer Apsley Cherry-Garrard observed: “We all have our Winter Journeys, sooner or later.” One of the great comforts of horror for many fans is that it allows us to experience fear and catharsis in a “safe” setting; to examine our own limits and—quite literally—how far we are willing to go. What we can take from location-centred horror, therefore, is that the qualities we need to overcome the monster are carried with us, and in that respect “the outward show is nothing, it is the inward purpose that counts” (Robert Falcon Scott). 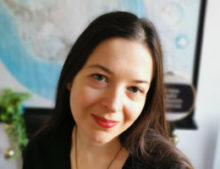 Ally Wilkes writes supernatural, cosmic, and weird horror. She’s particularly fascinated by Polar stories and the exploration Gothic, despite suffering from seasickness and loathing the cold. Her debut novel All the White Spaces, set in the Heroic Age of Antarctic exploration, will be out in January 2022 (UK) / March 2022 (US). Ally’s short fiction has been published in Three Crows Magazine, and she’s also the Book Reviews Editor for Horrified Magazine. Ally lives in Greenwich, London, with an anatomical human skeleton and far too many books about Polar exploration. You can find them on Twitter @UnheimlichManvr.