Nearly every culture has the lone woman in white. For some, she is a harbinger of death to come. For others, she is a bringer of death herself. And in other cultures, she is a warning to those who stray from societies’ morals. Cursed to exist forever with her shame. To the people of Mexico and the American Southwest, La Llorona—the Wailing Woman—is all these things. Yet she is often portrayed in modern media as a one-note boogeyman (or woman, in this case). Growing up in a Mexican household, I only knew La Llorona as a threat. A way to scare me home before dark: “Hurry home, mijo. You don’t want La Llorona to take you away.” Trust me, those simple words had more of an impact than any threat of grounding or having my Nintendo taken away. Just as they had for my parents, my grandparents, and all who came before.

Now, this is where one would normally go into the history of the myth, where her tale first came to life. But like much of Mexico’s past, La Llorona’s beginning is not so simple. In some versions of her myth, she was a beautiful woman who seduced a wandering man and convinced him to settle down. After having children, he grew enraged at her holding him down. To prove her loyalty, she drowned her children. Another version presents her as a simple but stunning peasant woman who falls in love with a wealthy Spaniard. He rebukes her love, telling her he can’t be with a woman with children who are not his own. His rejection inspires her to drown her children, believing he will then marry her. Instead, her action shocks the man and he curses her, and she throws herself into the very river where she drowned her children. Further back, she is the lover of Cortes’, playing a part in the destruction of the Aztec people. We finally learn of her first inspiration, that of Aztec goddess Chihuacóatl, who attempted to warn her people of the coming invasion, but failed to do so, and must endure her failure as her curse.

Regardless of her original story, the creation of La Llorona always begins with removal. Not of her children or her people, but of her agency. And therein lies the true horror and tragedy of the myth. Her rise comes as a result of manipulation and power over her own sense of self and value. She is more than just a monster used to scare kids home before dark. She is a warning to those who wish to move beyond their social status. And while her deeds are indeed horrific, the message behind every version of La Llorona is not about protecting children. It’s about knowing your place. If she had simply played the part of the noble peasant mother, her children would be alive.

This is even evident when you examine her foundations as a goddess. Ignoring her agency, Spanish and Catholic Church chroniclers resign her to the domain of fertility and motherhood. Lacking any form of authority or control, she foresees the demise of her people. Yet, when they do not heed her warning, she is the one who receives the punishment: She is doomed to forever wander a land that she attempted to save. It is an aimless wander with no sign of ending as The Curse of La Llorona sets to debut in theaters in 2019.

Like many horror fans, especially one who grew up with La Llorona’s frightening story whispered in my ear, I was excited to see our weeping woman coming to life. To many people, La Llorona is more than just a flavor of the week monster. She reaches deep into a cultural core. Unfortunately, that is not how the trailer presents the film and character. Indeed, the trailer suggests La Llorona is just another dangerous monster from south of the border, come to wreak havoc upon the innocent and hard-working American. It’s this altered interpretation of the weeping woman as shown in the trailer that adds another layer of tragedy to her myth. Her story is again becoming manipulated and twisted to suit a modern narrative. One that removes what little humanity and agency she had left.

That’s not to say a fantastic horror story can’t be told with La Llorona. There most certainly is one, but one that brings her true story to life. Without a sense of humanity, La Llorona is just another monster. But she is so much more than that. She is a constant evolution of a people who slowly had their identity stolen and drowned in that river. When she wails in the night “¡Ay, mis hijos!”, she is looking for more than her own lost children. She is seeking herself. She is seeking us. She wishes to take back everything stolen over the centuries. Such a reality is worse than any jump scare. Her existence is one of horror and tragedy.

One I hope we do not repeat. 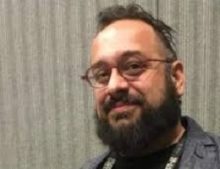 Aaron Duran is a writer in Portland, OR. He’s the founder and co-host of the popular podcast, Geek in the City Radio. Aaron is an author of multiple comic books, including his creator-owned series Dark Anna and the Pirates of Kadath and Dial F for Foodie, as well as the Forgotten Tyrs young adult horror series of novels. Aaron draws much of his literary inspiration from the creepy folktales told to him by his small but feisty abuela. When he isn’t writing, you can find Aaron in the kitchen. Where he spends time coming up with tasty recipes and experimental beer and cider brewing for his incredibly supportive wife to enjoy.