I am much more a reader than a watcher of horror, but, that said, I’ve always enjoyed watching classic horror movies with my mom. Along with Vincent Price flicks and creature features, she introduced me to Godzilla and other kaiju movies. Because of this shared interest, many years ago, we stumbled upon a 1963 Japanese horror movie directed by Ishirô Honda: Matango (known in the United States as Attack of the Mushroom People). In this truly weird film, a small group of wealthy vacationers seek shelter on a mysterious island after their yacht is damaged in a storm. The island offers little for the bickering group to eat, other than huge mushrooms. They learn from the logbook of a previous shipwreck that the mushrooms are dangerous, possibly mutated by radiation. When the threat of starvation leads a few individuals to eat them anyway, they discover that the mushrooms are addictive, cause hallucinations, and turn whoever eats them into a mushroom/human hybrid monster. One of the film’s influences was the 1907 story “The Voice in the Night” by William Hope Hodgson, who was an influence on Lovecraft as well. His story has a man and a woman similarly shipwrecked on an island who eat fungus to stave off starvation, only to find themselves slowly being covered and transformed by it. In the years after I watched Matango, I forgot many plot details, but I never forgot its vivid and surreal imagery. Although it’s a very different story, I even had a dim memory of Matango, with its scenes of transformation and shrouds of fungus, when I read Silvia Moreno-Garcia’s Mexican Gothic (2020).

These aren’t the only times I’ve noticed fungus appearing in horror fiction. While the pandemic raged across the globe in 2020-2021 and what we thought of as everyday life was changing constantly, I was teaching college students (albeit abruptly online) and still working on academic projects. One of those projects involved revisiting Poe’s “The Fall of the House of Usher” (1840), and when I re-read the story, I was reminded of a creepy image that had stuck in my mind since the first time I read it in high school: the fungus. The story is simply saturated in decay. And the fungus spreading the decay is one of Roderick Usher’s many fears. He declares that he believes in the “sentience of all vegetable things” and that his house and property are sentient (and malicious) due to the “arrangement” of the building stones and “the many fungi which overspread them.” He thinks the fungus, and its accompanying rot, has created a strange “atmosphere” around the house that has a “terrible influence” on the people who live within it. After “Usher,” I re-read The Citadel of Fear (1918) by Francis Stevens (Gertrude Barrows Bennett) for another project. One of Stevens’s weirdest set pieces in her novel is a malevolent trans-dimensional swamp inside the basement of an American suburban house that contains vapors, strangely formed disturbing skeleton creatures, and “luminous fungoids.” My curiosity was piqued. I was seeing fictional mushrooms everywhere. I wondered why something as innocuous, and even beneficial, as fungus so easily unsettles us.

In his book Entangled Life, biologist Merlin Sheldrake catalogues the numerous characteristics and benefits of fungi. He notes that fungi help to sustain all life on Earth, from the transformation of organic material into soil through decay, to the provision of vital ingredients in medicines. Fungi connect plants and help keep them alive; they interact with insects and animals in visceral ways; and they can influence human cognition, mood, and general health. Fungi may provide options for dealing with pollution, and they are necessary to healthy ecosystems. The fruiting body of fungus—the mushroom—is a food source from the portobello “burger” to prized truffle oil. We all probably know at least one person who forages for or grows mushrooms. We also know, however, that mushrooms can be poisonous, as evidenced by Merricat Blackwood’s love for “Amanita phalloides, the death-cup mushroom” in Shirley Jackson’s We Have Always Lived in the Castle (1962). Fungi have many positive aspects, but there is a fine line between those positives and the uncanny ways they can shift to something frightening. This subtle shift is a staple of the horror imagination.

At first glance, it’s easy to see how fungus became the go-to horror trope because of this possibility of poison and its connections to death, decay, spoil, and burial. I love a good haunted house tale, and fungus and mold have added creepy atmosphere to many a Gothic structure. More uncanny turns to beneficial aspects of fungi include the nagging thought that fungi seem alien to us. For people not deeply versed in science, fungi don’t quite fit our categories of plant and animal life. Then there are fungi’s deep connections to transformation, infiltration, and unstoppable spread, and fungi’s disturbingly useful trick for fiction of producing altered consciousness. If fungus can be linked to medicines, it can also be a source of disease for horror fiction. Take, for one example, the yeast pandemics that disintegrate society in Margaret St. Clair’s 1963 post-apocalyptic novel Sign of the Labrys. Its themes of loss, isolation, and societal instability seem prescient now in the 2020s.

Fear of fungal transformation and control continues to animate weird fiction. Aliya Whiteley’s novella The Beauty (2014) combines the concepts of pandemic and transformation, as women die of a widespread fungal infection and then later, strange mushroom creatures with possible faces appear and interact with the remaining men. Another instance is Caitlín R. Kiernan’s 2017 novella Agents of Dreamland. In it, Kiernan riffs on an other-planetary origin of a strange fungus from weird fiction’s roots but imbues it with characteristics of the Cordyceps, or, as it’s more colloquially known, “zombie-ant,” fungus that in real life infects and takes over the bodies of insects. This idea of fungus taking over and controlling humans appears in some zombie fiction, too.

Just in the last two years, an intensely effective exploration of fungal horror appeared with Silvia Moreno-Garcia’s Mexican Gothic, the novel that brought wisps of Matango and shades of Poe back to me. Mexican Gothic incorporates fungus in all its horrific possibilities from the Gothic setting to transformation, altered-consciousnesses, and control, in particular the control of women’s minds and bodies by unscrupulous, entitled white men. Fungus and decay set up the atmosphere of the Gothic setting of High Place, but there’s a much deeper threat in the layers of fungus and mold covering the cemetery and house, both without and within. In an image similar to the sprawling webs that actual fungi use to spread and create connections, Moreno-Garcia reimagines this phenomenon as a malevolent system used to plug human consciousnesses into a tapestry of horror. The protagonist Noemí Taboada discovers this when she is infected and faces the terror of altered perception, along with body horror and existential loss of control over her life and future. This revises earlier examples of the trope, such as Poe’s story, for the twenty-first century.

Fungus has spread from the toadstools in fairy tales to Gothic decay to the glowing mushrooms and mushroom/human hybrids of weird fiction. It can be found in narratives involving body horror transformations, eco-horror, pandemics, and zombies. And it’s familiar. We see it around us on trees, in our bathrooms, and on menus. It also represents death and decay, terrifying concepts for humans. Fictional fungus has evolved alongside society’s fears and anxieties, especially with regard to the integrity of our bodies and individuality, the threat of pandemics, and our fraught relationship to the changing natural world. It makes sense that I paid more attention to the widespread presence of fungus in horror fiction while I was living through a pandemic. My actual anxieties about contagion and loss of control most likely made me more perceptive of, or vulnerable to, that horror trope. Add to this the proliferating news reports of the effects of climate change on our weather, including increasingly violent storms and droughts, and we are primed for apocalyptic narratives involving the natural world. Since horror fiction is a mirror of our place in time, I don’t think fungi will stop spreading, or fruiting, throughout it any time soon. 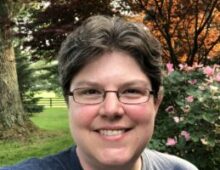 Melanie R. Anderson is an associate professor of English at Delta State University in Cleveland, Mississippi. She is the co-author of the Bram Stoker and Locus award-winning book Monster, She Wrote: The Women Who Pioneered Horror and Speculative Fiction (2019). In addition to academic essays related to the supernatural and horror in American literature, she is the author of Spectrality in the Novels of Toni Morrison (2013). She has co-edited three academic essay collections: The Ghostly and the Ghosted in Literature and Film: Spectral Identities (2013), Shirley Jackson, Influences and Confluences (2016), and Shirley Jackson and Domesticity: Beyond the Haunted House (2020). She also co-hosts two podcasts about horror: The Know Fear Cast and the Monster, She Wrote Podcast.