The H Word: The Rational Vs the Irrational

When I was in first grade—we’re talking 1970 here—I was excited to discover that the high school drama club was going to put on a play called The Ghoul Friend. I was already a dyed-in-the-wool horror geek by this time, and I pestered my parents until they agreed to let me go. I don’t remember much about the plot after all these years, but I remember there were lots of cool monsters . . . and at the end the actors took off their masks to reveal they were all humans in disguise and not really monsters after all. Scooby-Doo was a relatively new cartoon show back then, and I of course watched it, so I was familiar with the “It was Old Man Jenkins all along!” type of ending. I hated those endings. What was the point if the monster wasn’t real?

But of course, that’s the message of such stories, especially when they’re aimed at children: Monsters aren’t real. Reality—which for a time seems to have been violated by an aberrant impossibility—is the same as it always was. Maybe not altogether safe, but safe from intrusion of the can’t-be-mustn’t-be-real. There was a rational explanation for the seemingly paranormal events in The Ghoul Friend, but all good horror—even the most seemingly realistic—is irrational at its core.

Horror fiction speaks to the existential conundrum of what it means to be human. We are sentient beings aware of our own impending death, and this sense of mortality shapes our identities and how we live our lives. But death makes no sense. In our minds, it seems we’ve always existed, and no matter how hard we try, we cannot imagine not existing. The closest we can come is the experience of sleep. We say rest in peace, after all. Death and nonexistence are inherently irrational. There are no answers for why is there death and what is it like to not exist. Therefore, the prime experience of being human is irrationality. And it’s this truth that we wrestle with all our lives, and horror fiction is one of the prime ways we do this.

The rational is a powerful lure, in both life and fiction. It’s understandable, safe, orderly. It has rules, and these rules can be known and followed, making reality controllable (or at least more so than it otherwise might be). The rational is reassuring, comforting, and provides a sense of meaning and one’s place in existence. The irrational, on the other hand, is unknowable, uncontrollable, and unpredictable. There are no rules. It’s wild, dangerous, nightmarish, and ultimately without meaning. Therefore, neither you nor existence itself has any meaning.

Too much explanation—too much rationality—kills horror. Depicting clearly defined dark forces with specific origins and rules that govern their behavior and abilities, all of which can be known to both characters and audience, removes any sense of mystery. And giving dark forces weaknesses which can be discovered and exploited ultimately makes these forces controllable and able to be defeated. When this happens, a story edges away from horror into adventure territory. The heroes in these stories could just as easily be battling criminals or terrorists as vampires or zombies.

The movie Sinister is a prime example of (a bit) too much explanation. Mr. Boogie is a wonderfully enigmatic force until the point where a university professor explains that he’s an ancient Babylonian god named Bughuul who demanded children be sacrificed to him. Mr. Boogie becomes a more known quantity, one with a clear motivation, and that makes him safer for the audience. He’s been quantified, categorized, and labeled, and in the process made less frightening (and less interesting). In the television series Supernatural, Sam and Dean Winchester research a dark force on the internet, quickly learn about its weaknesses, and dispatch it with little difficulty, often bantering with it along the way. No horror here, only adventure, albeit within a horror/fantasy setting. (And as someone who’s written a number of Supernatural tie-ins, I don’t mean to disparage the series by saying this. Adventure is fun. It’s just not horror.) And of course, Scooby-Doo is the apotheosis of too much explanation. The monster is always a human posing as a supernatural entity in order to commit or cover up a crime.

On the other hand, too much irrationality can kill horror, too. If anything can happen at any time, a story can become absurd and comical. In order for horror to work, there must be a reality to be violated, to be taken apart piece by piece. Too much unreality constantly reminds the audience that what they are experiencing is a story—is unreal—and it can ruin the suspension of disbelief for some people. The work of David Lynch is a prime example of this, at least for a mainstream audience. His movies and television series are entirely irrational—even when they pretend to be otherwise—and without any solid reality for (some) viewers to hold onto, they bail. Since I gravitate toward surreality in my own fiction, I love Lynch’s work, but a steady diet of it to the exclusion of any other kind of horror would be too much for me.

But when rationality and irrationality work together, they can create some of the most effective horror. Shirley Jackson’s “The Lottery” may be the horror story with the most perfect partnership—the perfect tension—between the rational and irrational. The concept of the Lottery itself, the belief that stoning a villager each year will ensure a good harvest, is irrational in the modern world. There isn’t even a specific god the sacrifice is meant for. It’s just supposed to work, as if it’s a natural—if brutal—process of cause and effect. Readers are supposed to accept that the people in this village have conducted Lotteries for decades, perhaps centuries, and all of them have gone along with the program. And not just in this one isolated town, but in many communities. None of this is rational.

So what is rational in this story? The normal, everyday way the villagers behave and interact with each other (apart from the Lottery, of course). The setting—a small American town—which is the epitome of normal, and the fact that times are changing and some towns have decided to do away with the Lottery. Those towns have become rational—and this rationality makes the horror of the Lottery even more intense. Readers know there’s no supernatural force to placate, that the Lottery occurs only out of mindless tradition, and that this town, like others, could have abandoned the Lottery, but hasn’t, thus making the death of this year’s sacrifice even more tragic and meaningless.

Terence McKenna, enthnobotanist and psychonaut, once said that “Reality is, you know, the tip of an iceberg of irrationality that we’ve managed to drag ourselves up onto for a few panting moments before we slip back into the sea of the unreal.” I can’t think of a better description of horror. 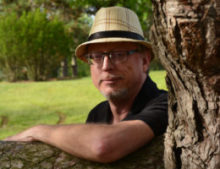 Tim Waggoner has published over forty novels and five collections of short stories. He writes original dark fantasy and horror, as well as media tie-ins, and his articles on writing have appeared in numerous publications. He’s won the Bram Stoker Award, the Horror Writers Association’s Mentor of the Year Award, and he’s been a finalist for the Shirley Jackson Award and the Scribe Award. He’s also a full-time tenured professor who teaches creative writing and composition at Sinclair College in Dayton, Ohio. His latest release is Writing in the Dark, a book on writing horror.