The H Word: The Horror of Solitude

Is it worse to be lonely in a crowded room or lonely in an empty one?

Perhaps you have an immediate response to this, one you’ve pondered before now. It’s certainly not a new question, but the truth is that most of us have never had much of a chance to really know for sure. Even those who pride themselves on being introverted are often forced to spend a tremendous amount of time with other people. The average life, in fact, tends to be arranged around interaction—at the office, in a coffee shop, out and about with family and friends.

That is, until recently. It probably comes as little surprise that I’m writing this from isolation. At the moment, most of us in America and elsewhere around the world are currently under shelter-at-home orders. Terms like social distancing, which were completely unknown to us only weeks ago, have become part of the everyday vernacular now.

There’s a unique terror that comes from this much solitude. In particular, if you’re susceptible to depression, being on your own can force you into loops of unending rumination when you have no one but yourself—and your ghosts—to keep you company. The quiet can be soothing to some, especially in small doses, but it can be such a danger to others.

So what is it about being alone that’s so terrifying? There’s comfort in company to be sure, in knowing who to expect in our day. Maybe it’s as simple as waking up your partner or your kids in the morning, or making chitchat in the gym or on the bus, or even hanging out in the breakroom at work. It can be an almost invisible interaction, but there’s a lovely banality to it. Because when these reassuring cornerstones of our existence are taken away, we can so easily become unmoored.

Solitude carries with it a sense of otherness, of being excluded from life as we know it. That’s why isolation makes for such potent horror. From numerous Stephen King works including The Shining and “Secret Window, Secret Garden” to Richard Matheson’s I Am Legend and Ripley in the final sequence of Alien, stories that focus on a character who’s been cut off from the world are frightening to us precisely because they represent one of humanity’s greatest fears—loneliness. Without anyone else to tether us to reality or to give us backup when we need it, the monsters in our lives feel that much more chilling and insurmountable. We need people to protect us, and we need to protect people. Despite how quarrelsome we can be, it’s in our nature to crave togetherness.

Solitude is everywhere in the horror genre. Even the Final Girl popularized in slasher films is trapped in her own sort of isolation. Having lost her friends and family, she’s all alone, with only the monster—the very embodiment of her fears—to keep her company. More modern fare including I Am the Pretty Thing that Lives in the House and House of the Devil also follow in the steps of the isolated Final Girl, featuring female protagonists in secluded estates where the horror is waiting for them around every dusty corner. Being alone means being vulnerable, and women know this reality all too well.

And then there are those who might not be entirely alone at the moment, but would rather be. Over these past few weeks, one of the realities troubling me the most is how many people have been forced into isolation with their abusers. Even without a global pandemic, abuse is too often treated as nonexistent, as a problem not worthy of society’s attention. Horror, however, is a genre that never flinches away from uncomfortable truths, and it’s examined the toll that trauma and isolation can take. In these strange, uncertain times of people being all around us yet nowhere to be seen, I keep returning to Ira Levin’s classic Rosemary’s Baby. Surrounded by a metropolis of people, Rosemary is in her seemingly idyllic New York City apartment, but with a gaslighting husband and diabolical neighbors, she might as well be shipwrecked from civilization. I fear there are far too many Rosemarys out there right now; only a wall’s width from help, but a whole world away, too.

As frightening as it is, one thing we’ve all learned over the last month is that it’s impossible to know what’s to come. Still, no matter how much it feels otherwise, we haven’t all become doomed characters in our own personal horror film. If nothing else, we have one advantage over the hapless protagonists in a scary movie: we know this monster can’t last forever. There will be an end to our isolation, even if we don’t know when that will be or what our lives will look like on the other side of it.

Circling back to that earlier question, I used to be confident that it was far worse to be lonely in a crowd than lonely on your own. Now I’m not so sure. We all need people. The right people, yes, as Rosemary Woodhouse can attest. But there’s nothing wrong with admitting that you don’t want to be alone. It seemed for a while there was social currency in reveling in one’s detachment and introversion, as though disliking others carried a higher moral ground, but I wonder if after this, that perspective might change. I, for one, had called myself an introvert for years, but lately, I’ve been reconsidering that. Because perhaps now more than ever, we need a sense of closeness to humanity. If horror is so often about the terror of being alone, then defeating those fears has to come from each other. 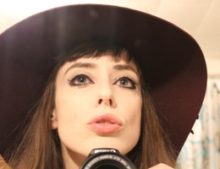