The H Word: The Horror of Hair

Whether decoration or burden, hair is at the forefront of many cultures and has been a part of the body consciousness of women since the dawn of time. Some cultures consider it a most prized possession, one that should be donated to the gods in thanks for favor. Others consider it a defining characteristic, one that speaks of a person’s background, upbringing, and worth. While some have the freedom to work with it, styling, cutting, coloring it as they are so inclined, using it as a form of self-expression inasmuch as their clothing is, others are held to rigid standards regarding hair and its maintenance. This curious inequality surrounding hair plays out in the media, in business, in communities, and even in households. Bias colors perceptions and creates an “other” that is based upon an irreversible fact of nature: the way that hair grows from one’s head. That separation, based entirely on nature, is a real construct that can be seen time and time again in world marketing and media. And now the horror genre has given it a distinction that fits in more ways than one.

The body horror subgenre deals with the terrors of the body. Often this imagery is shown in the form of mutation and deformation and usually leans toward the extreme, as I am sure your memory of late-night B-movie watching can attest. But there is a truth that the physical brings to the subgenre that cannot be ignored, something that makes the audience cringe and move away while their eyes remain trained on the thing that is pulsating, the thing that is morphing, the thing that is ripping through sinews and muscle fibers, pressing, cutting, tearing at smooth skin from within to get at the outside air. It is here where the concept of hair and what it means to women and men alike can be investigated, put on display, and challenged.

Hair adorning and their respective histories can be found in many cultures as can the perceptions and rules surrounding what is deemed as proper. Consider that many Asian cultures favor straight, neat hair; that Muslim women are expected to cover their hair to show modesty; that African American women wearing natural hairstyles to work is still a topic of discussion. Now think about the Japanese onryō whose long, unkempt hair hangs loose in front of her face, a stringy web of dark strands, until her ghostly countenance is revealed. Think about the meaning here, the truth that is perpetuated in this visual. The onryō is a ghost out for revenge—but for what? Made popular in mainstream cinema by heart-stilling characters like Sadako from The Ring and Kayako from Juon, the hair that covered their faces became as frightening as their crawling approach and the sounds that spilled from their ruined throats, but only a cursory address was given to why these souls remained in a state of unrest. These women were feared even though their backstories spoke of abuse, torment, and murder. These images—the ones where something terrifying lives behind dirty strands—they are the ones that stick with us, not the plight that set her appearance in motion. The tradition of terrifying hair is continued with the film Exte: Hair Extensions, which has the stolen hair of murdered women act as a homing beacon, calling the ghost who is in search of its retrieval, and the later release Ekusute, which explores the idea of hair as parasite, the hair growing wild inside a human husk: the body of a slain woman. In these examples can be seen the patriarchal importance of hair by making much of the horror of the converse.

But what about when the hair is coveted?

The movie Bad Hair taps into the importance that the African American community places on hair, whether we want to or not. It puts on display the undercurrent of bias and judgment that exists in the African American community around hair, how one presents themselves, and how that equates to status and worth in ways that have only been hinted at heretofore. It also brings to light the still relevant notion that straight hair is more palatable in the workplace and in one’s personal life because the hair makes the wearer look and feel like a different person. This movie dives into the coveting of the hair and what it brings, to include respectability, a love interest, and a higher standing at work. But all of this comes at a price. Pitting the natural hair community against the processed one, viewers are not only introduced to conflicts that they may never have known existed, but also meet a body horror rooted in spirits and forsaken promises kept in the hair. In an incredibly poignant moment—so richly layered with symbolism and meanings that one viewing fails to reveal them—the hair animates, sinking itself into a gaping wound to drink the blood found there. The hair, the desired, silky tresses . . . it is the antagonist, the wearer an unwitting host turned puppet.

Cinematic depictions only mirror what happens in real life; flat irons and rod sets, chemical straighteners that can eat through metal—all of these methods are routinely used on the hair of women from the African diaspora as they search for the one product/process/savior that will provide them with straight hair. Others sew in, glue in, or braid in hair without a care for where the strands might have come from in search of that desired look . . . regardless of what secrets it might hold. Hair willingly sacrificed as part of the Hindu tonsure? Who knows? Taken from captives in a hair farm? Unsure. The hows and whys of the hair’s origin are of less importance than its luster and the state of its ends. The descriptors of how hair is treated during the quest for straightness—the burning of the scalp during chemical processing, the stripping of the hair follicle, the pulling of the strands into a tight coil upon which someone else’s hair is added, treated with a needle and thread and sewn together—speak of body horror in its finest form: transformation into the grotesquely beautiful then put on display. And it is beautiful . . . for a time . . . until the consequences to the soul are tallied.

Hair as fear needs little analysis once the above truths are recognized. As in the cases of the Japanese and Malaysian ghost women whose hair hides their visages, countenances so terrifying that they induce death upon viewing them, and the Southeast Asian Pichal Peri who, with her backwards feet, takes time to peek out from behind her long, dark hair to eat the livers of children, women’s treatment of and decisions about their hair incite fear in those who witness, those who stare. The desire to be seen as beautiful—just like other people whose hair is naturally long, straight, and therefore worthy—is punctuated by the fact that they are not like those women, that they can never be: that they are different . . . in effect, other. They then become angry, something society thinks should be feared. Much like Medusa’s plight, her tresses made monstrous in the form of snakes because of a perceived betrayal, the woman herself becomes secondary to her horror.

Hair that turns to snakes.

Hair that grows from the host’s eyes.

Hair that creates a portal within which a demon can materialize to claim another victim.

Captivating to all who lay eyes upon it. 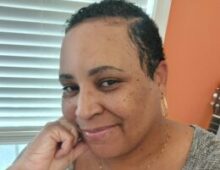 L. Marie Wood is an award-winning dark fiction author, screenwriter, and poet with novels in the psychological horror, mystery, and dark romance genres. She won the Golden Stake Award for her novel The Promise Keeper.  She is a MICO Award nominated screenwriter and has won Best Horror, Best Action, Best Afrofuturism/Horror/Sci-Fi, and Best Short Screenplay awards in both national and international film festivals. Wood’s short fiction has been published in groundbreaking works, including the Bram Stoker Award Finalist anthology, Sycorax’s Daughters and Slay: Stories of the Vampire Noire. Wood is the founder of the Speculative Fiction Academy, an English and Creative Writing professor, and a horror scholar.  Learn more about L. Marie Wood at www.lmariewood.com.