The H Word: The Devil’s Laughter

The curious reader should be forewarned that spoilers abound throughout this essay. But if our subject is the devil, then dangerous secrets form part of our natural scenery.

If the devil is real, he is neither skulking in dark corners nor leering at the unwary nor hatching plots of unimaginable evil. If the devil is real, he is laughing. He is proffering a juicy secret and waiting, not to see if you’re tempted, but how much. He is waiting to see whether this is the temptation that, at last, proves irresistible. Whatever it takes for you to give in, whatever marks the tipping point—whatever that is, that’s the devil.

The devil is a key figure in the horrific imagination, certainly in any nation that bears the scorch marks of a Christian legacy. From the beginning of the world—if the Book of Genesis can be believed—the devil has tempted and tricked and led us astray. Right? Well, sort of. Lies and deceptions are, of course, the name of the devil’s game. And that brings me to the key question: What does the devil do? My answer seeks to shed light not only on the Light-Bringer but on the pleasures and rewards of horror fiction.

Let’s start with the truth. That wasn’t the devil in the Garden of Eden. At least not at first. It was just a serpent that whispered to Eve and filled her head with certain notions. Nor did the devil collude with God to test Job’s moral fiber. No, it was the Adversary who bet that he could goad Job into cursing the name of the lord. Here is where things get tricky: that’s a satan. After all, “adversary” is what satan means; it refers not to a specific individual but to a generic role. Christian theologians embarked on reinterpretations of the Old Testament much later, knitting together various biblical incidents and blaming the same figure for all of them. Not until the second century did Justin Martyr identify Satan as the serpent in the Garden, the tempter of Christ, and the ruler of demons.

But of course, stoking uncertainty is what the devil—as we know him now—does. He does not always, or only, inspire fear but doubt, fear’s introspective cousin. When you feel doubt, you often feel not that there is something wrong with the world but something wrong with you: your perceptions, your beliefs, your knowledge of the world around you.

One of horror fiction’s great strengths is to present its characters, and by extension its readers, with epistemological limits: with bizarre phenomena or events that cannot be understood within conventional frameworks. And one of horror fiction’s primary purposes, as I see it, is precisely to challenge those frameworks, to explore their shaky foundations, to lead us beyond their confines and give us a peek into other, weirder realms. That dualistic tension—fear and curiosity, anxiety and delight—is the source of our readerly pleasure. In classics of the genre, including William Peter Blatty’s The Exorcist (1971) or Clive Barker’s The Hellbound Heart (1986), devils draw our attention to exactly that kind of tension. In The Exorcist, Pazuzu stokes a crisis of faith. The possessed Regan feels to Father Damien like a physical manifestation of his religious doubts. The novel’s power lies not only in its power to terrify but in its fascinating meditations on religion, science, and faith. In The Hellbound Heart, Frank Cotton is a hedonist in pursuit of sensual experience at all costs. When he unleashes the Cenobites, they unlock a new world of sensory, and sadomasochistic, experience, leading Frank and his sister-in-law Julia to indulge the nastiness that already lay deep within them. Both Blatty and Barker use diabolical beings to express their characters’ inner turmoil and to reveal different ways of seeing the world. Horror fiction confirms that conventional beliefs and understandings of the world are not enough—that the world is always too weird to be so pinned down. When the devil comes calling, he tempts us with secrets and knowledge that will let us move past the ordinary, but what he tends to offer is what we already felt drawn to anyway.

What interests me most about literary devils is that they can be as much satirical figures as frightening ones—more of that dual tension. The difference between horror and humor is, after all, not so vast. Both might be described as something strange, brought into focus. Toward the end of the eighteenth century, something that resembles what we now enjoy as horror fiction began to take shape in England: the gothic. In the pages of gothic novels such as Matthew Lewis’s The Monk (1796) and Ann Radcliffe’s The Italian (1797), characters peer into the dark, full of anxiety and dread. Shadowy figures draw the eye and lead others into danger. In The Monk, it’s Satan who pulls the strings the whole time. In The Italian, it’s just Catholics (though to many in eighteenth-century England, that’s nearly as bad). What is interesting about devils in gothic fiction is that they emerge after nearly a century’s worth of literature in which devils ran rampant, stoking curiosity and amusement much more often than fear. Even as many began to turn away from belief in a literal devil, and scientific discoveries cast doubt on the veracity of Christian traditions, the devil served as an expression of the dangers and pleasures of curiosity.

One of my own favorite devil-centric texts, The Devil upon Two Sticks, first appeared in English in 1709, a loose translation of a French adaptation of a Spanish prose satire. It follows a young scholar on the run in Madrid who stumbles into a sorcerer’s lair and hears a voice issuing from a bottle. When he frees the devil Asmodeo from the bottle—called “the devil upon two sticks” because he uses crutches, having fallen from the sky after a spat with some fellow devils—Asmodeo shows his gratitude by leading his new companion through the streets of Madrid, lifting the roofs off nearby houses and permitting him to peer inside. The Devil upon Two Sticks provides a devil’s-eye view of life in the eighteenth-century city. We witness people’s foibles and follies—what they get up to when they believe they’re alone. This text is all but forgotten today, though it inspired a slew of sequels, re-translations, and even stage adaptations. (Notably, Alan Moore’s 2016 novel Jerusalem includes a chapter that riffs on the premise.) Devils abound in eighteenth-century English literature, but rarely do they inspire fear. In pantomime adaptations of the Faust legend, devils serve as marvelous onstage spectacles; in weird satirical books like A Sure Guide to Hell (1750), they offer instructions for behaving selfishly, ensuring a good time in this life and a one-way ticket to hell. But what these spectacular or humorous devils have in common with the frightening devils (or devilish Catholic priests and Inquisitors) of gothic fiction is the ability to stoke curiosity. They cast the familiar in a different light and grant access to unconventional or forbidden knowledge. The Devil upon Two Sticks exposes the secrets that people keep to themselves within the urban landscape; the fearsome devils whom Lewis and Radcliffe associate with popery reveal the potential perils of un-English customs.

When horror authors turn to devils, they tap into this complexity. In the past decade or so, numerous novelists have toyed with the historical and narrative tropes of Christianity—including devils—telling self-aware stories about the push and pull of dangerous but compelling secrets. Joyce Carol Oates’s The Accursed (2013), as far as I’m concerned, is one of the best horror novels of this century. Set in turn-of-the-century Princeton, New Jersey, it offers a delicious gothic barrage of demons, scandals, madness, and death. Oates casts a diabolical eye on the ugliness of American history—the creeping feeling that, despite America’s mythos and self-regard, it is ultimately and irrevocably damned by God. In a wonderfully perverse—and Puritan—twist, Oates reveals that the demon-haunted afflictions that make up the novel’s plot are nothing to do with the devil at all, but missiles launched from the heavens by an angry God. Jeannette Ng’s creepy gothic fantasy Under the Pendulum Sun (2017) demonstrates how missionaries might respond to the discovery that fairyland is a real place. It is brilliantly imagined, partly inspired by actual nineteenth-century missionaries’ accounts of their travels in China. Ng turns the narrative on its head by revealing that the protagonist is a changeling and that the fairies’ homeland, Arcadia, is the place that Christians know as hell. Ng captures the mixture of curiosity and aversion with which so-called exotic cultures are often portrayed; with the fae, she creates characters who not only resist missionary efforts but upend the entire epistemological apparatus that underlies them. Catherynne M. Valente’s Comfort Me with Apples (2021) is a captivating little puzzle of a novella, something like “Bluebeard” crossed with the Genesis story set in a gated community. Its narrator, Sophia, has a nagging feeling that something is wrong with her perfect life. Of course, it takes the hissing whisper of one Cascavel (whose name, naturally, means “rattlesnake”) to tempt her into studying her own life more closely, leading her to realize that she is one in a line of perfectly subordinate wives, inexorably ruined by her own curiosity. Comfort Me is a smart, self-aware exploration of the stories that box women in; and it shows how it is curiosity like Sophia’s (or Eve’s) that propels defiance and change. Novels like these are playful as well as unnerving; they revel in their diabolical energy.

To offer forbidden knowledge is what the devil does. More than a symbol of ultimate evil or eternal damnation, the devil tells us what we want to know and then stands back to watch what happens next. And if the consequences prove to be destructive, is that the fault of the messenger or the inevitable result of the velocity of desire? Just the same, horror fiction offers the pleasurable frisson of fear and dread, willfully sought, and it is often those disconcerting feelings that compel us to think beyond the ordinary, to confront the conventions that restrain us. Whenever we embrace the perverse, seek what is wrong or bad for us because we just can’t help ourselves, that’s the devil. And the devil is laughing. 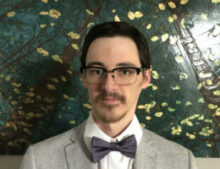 Daniel David Froid is a scholar, educator, and writer of strange stories who lives in Indiana. His scholarly research focuses on devils in eighteenth-century British literature, and his fiction appears in Lightspeed, Weird Horror, Post Road, and elsewhere. He teaches at Purdue University.