This is a story about two types of children: a Creepy Child and a Fast Girl. One is a trope found in horror. The other, a trope rooted in black culture.

I have embodied both.

The Creepy Child knows she’s not like other kids. Her otherness both strengthens and guides her, like a dusty amulet in an attic. Awaiting her.

I lived up to the Creepy Child label as best I could since I lacked two crucial criteria: whiteness and innocence. No one informed me of that as I sat down to write my first obituary at age nine: Suzy got stoned by her brothers.

That casual malice empowered me. There’s nothing like the ability to snuff out bullies with your pen, especially if you can’t fight. If you could, you’d be labeled the aggressor.

Horror was my first playmate. And like all good imaginary friends, it lingered in the shadows of my house, looking for me.

The first horror novel I read was Dean Koontz’s Whispers when I was nine. My mom left the book lying around in the den. I picked it up, drawn to the bloody knife on the cover. I rooted for the evil twin. I rooted for the killer because he felt invisible. Misunderstood. Alone. I didn’t want the white woman to win. She was successful. Beautiful. Protected. But above all, loved.

I was thirteen the first time someone called me fast. I was shopping at The Gallery in Philadelphia with my friend Tina, and her mother and grandmother. The city was only fifteen miles to the southeast of my small town, but it seemed like a universe away. Philly girls wore extravagant hairstyles and heavy gold earrings. Boys rocked high-top fades and designer sneakers. Everyone was more beautiful than the folks in my neighborhood. Every time I turned to stare at some cute guy, I met the admonishing stare of Tina’s grandmother, who walked a few steps behind us. Monitoring our movements. Later, Tina overhead her grandmother talking about me. “You better keep an eye on that friend of hers,” the grandmother said. “She’s fast.”

Being called fast by somebody’s granny was akin to a curse. I was marked as a wayward girl on the road to teen pregnancy, on the path to clandestine hookups with older men. Fast Girls, like wild horses, must be broken and controlled. Never mind that at thirteen, I had yet to have my first kiss, and boys my age weren’t checking for me. A nosy older woman whom I had just met had gazed into the crystal ball of her sanctimony and decided my future.

In spite of the grandmother’s pronouncement, I didn’t turn to sex. I dove deeper into horror. Gone were the days of my Creepy Child obituaries. I experimented with dark poetry and morbid short stories. I was a nerd who preferred reading Stephen King novels and Fangoria magazine in my bedroom to hanging out with the other kids on the block.

But my nerdiness did not protect me.

That same summer, I was in the house reading. Alone. My mom was at her second job and my brother was hanging out with the much older boys he befriended when we moved into our row house two years earlier. Someone knocked on the door. I looked out my bedroom window, which faced the street. My neighbors were lounging on their stoop, blasting hip-hop from a boom box, heads bobbing in the near darkness. Porch lights winked on. Families were sitting down to dinner.

A taxi cab idled in front of our house.

It was Tyrone, the boyfriend of my older cousin. He drove a cab part-time and sold hotdogs from a cart in Center City when he wasn’t robbing banks. A middle-aged stick-up kid who fancied himself to be more street smart than he was. I thought he was more foolish than fearsome, so I answered the door.

Tyrone breezed in and scoped out his surroundings while making small talk. I sat on the steps, half-listening, an open book on my knee as a gentle reminder that I was preoccupied and couldn’t talk for long. When he confirmed that my mother wouldn’t be home for a while, his conversation metamorphosed from the banal to the predatory. He pointed out that other girls my age wore designer clothes and expensive jewelry. “Skeezers,” he called them. The word gleamed under the light of his admiration. He leaned closer, making his pitch. My white Hershey Park tee shirt with the big chocolate kiss in the middle clung too tightly to my budding breasts. All the while, my thirteen-year-old mind was trying to understand why this adult, this family friend, was trying to casually extol the benefits of prostitution.

Sometimes horror invades your house like a vengeful spirit, looking for you.

Fast Girls are considered incorruptible. Experienced. Underserving of protection. Innocence can’t be lost if you were never considered innocent to begin with.

That endless summer when I was thirteen should have been filled with lazy days at the pool. Trips to the mall. Instead, I grew conscious of my body. Mistrustful of older men. A few months after Tyrone’s proposition, another incident fractured my already brittle sense of security.

My cousin Ranae invited me over to watch videos one night with her and her best friend, Cindy. They were both fifteen, so I thought it was cool to hang with the older girls. Ranae’s mom had kicked her out for the crime of being a rebellious teen, so she moved into her dad’s apartment. My uncle was going out for the night with his girlfriend. We were too old for a babysitter, so he handed my cousin a dime bag of weed instead.

“Don’t tell your mom,” he warned me on his way out, locking the door from the outside. My cousin and her bestie proceeded to blaze up as I sat between them on the living room couch. Trapped. My uncle knew I was quiet. Bookish. A nerd. But my nerdiness did not protect me. I was afraid of the dark apartment. Afraid we would get caught. The house could burn down and we were locked in.

My fear morphed to paranoia as I got a contact high. Bored by the comedy we were watching, Ranae looked for another video, settling on The Exorcist. I panicked, still squeezed between them on the couch, afraid to walk down the hall to the bathroom because a demon lurked behind the door. Ranae and Cindy fell asleep halfway through the movie. I stumbled to the TV, still high, looking for another movie to replace the terror onscreen. 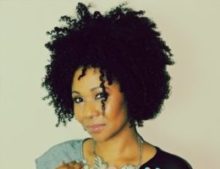 Nicole D. Sconiers is an author hailing from the sunny jungle of Los Angeles. She holds an MFA in creative writing from Antioch University, where she began experimenting with womanist speculative fiction and horror. She is the author of Escape from Beckyville: Tales of Race, Hair and Rage. Her short story “Kim” was published in Sycorax’s Daughters, a black woman’s horror anthology that was recently nominated for a Bram Stoker award. Most recently, her short story “The Stiffening” appeared on an episode of Nightlight, the black women’s horror podcast. Her short story “The Eye of Heaven” appeared in the anthology Black from the Future: A Collection of Black Speculative Writing, published February 2019 by BLF Press.