The H Word: Scary Stories to Relive in the Dark

I’ve been jobless for two and a half months now, which has caused a spike in mostly-forgotten anxieties. I hate being broke, hate watching my savings dwindle, and hate knowing I’m one bad fall or car accident away from poverty. So like most anxious, broke people, I comfort myself by bingeing crap television. Luckily, Netflix’s algorithms got something right for once, and presented me with Haunted.

Haunted is a 2018 Netflix original series, featuring non-actors telling true (or truth-y) stories about being haunted by some kind of supernatural entity, with their narratives supplemented with dramatic re-enactments by actors. Imagine a purely paranormal Unsolved Mysteries and you’re not far off.

Unlike Unsolved Mysteries or other documentary-style para-reality shows, Haunted’s storytellers address a small group of family and friends, rather than speaking to an off-camera interviewer. The onscreen audience asks questions, offers condolences or supporting statements, or gives a different perspective on the same events. Nobody contradicts the storyteller, at least on camera.

This is not to say that the show’s audiences have not been skeptical; episode two, “The Slaughterhouse,” about a psychopathic father who murdered passing “strays,” generated backlash. Armchair detectives in true crime fandom side-eyed the show’s vague and unsubstantiated claims of murdered runaways and hitchhikers in upstate New York.

To be clear: this is not legacy television. Haunted mashes together some of the silliest tropes from horror and paranormal reality shows. Literally half the episodes contain scenes of nubile young women being menaced while taking baths, for example. It doesn’t hold a candle to the Spooked podcast or Buzzfeed Unsolved.

But what caught my interest is that every haunting in the six episodes starts the same: with the storytellers as children, vulnerable, poor, part of a family in dire straits. The stories are rife with physical and emotional abuse, upheavals, family illnesses.

This contradicts the conventions of so many haunted house movies, which are at their heart about the disintegration of domestic security and the nuclear family. Danger comes from outside the family, not within, and opens up or exacerbates rifts in their relationships. This is all reflected in spinning crosses, mysterious cold spots and noises, photos falling off the walls, sudden outbursts of unseen violence. Family pets die or disappear. The rifts widen. Mothers or children become possessed, or the occasional father (much less often; spirits seem to be put off by stubble and white undershirts). At that point, the broken family can usually only be healed through the efforts of a spiritual authority (a priest, a shaman, a psychic) and an emotional touchstone: a mother or motherly figure, if it’s a child who is endangered, or a child if it’s a parent who’s been possessed. The infecting source of the haunting is eventually laid to rest, or at least contained. The family heals, maybe. Not every story about a haunting follows this plot, but many do: Amityville Horror, Poltergeist, The Conjuring, Thirteen Ghosts, The Haunting of Hill House—particularly the Netflix version. It’s rarer for a family to already be struggling, on the verge of breaking. Stephen King’s books, particularly The Shining, dive into that.

A psychologist in trauma studies, Robert Stolorow, claimed that trauma can break someone’s sense of time and reality. The world and the rules by which it’s bound have been violated, and reality is ruptured. When the trauma is recurrent or lasting—like poverty, or racism, or abuse—the ruptures never really heal. The underlying theme in Haunted’s stories is that those ruptures provide a gateway for spirits and evil forces to slip through, and they cling tenaciously. Your family might move, your abusive parent might die or leave you, you might scrape yourselves out of poverty, you might find love and acceptance—but you can’t outrun a haunting forever.

As a kid, my friends and I told each other ghost stories all the time. We had plenty of fodder: Scary Stories to Tell in the Dark was still in circulation, with its original terrifying illustrations, and we cribbed plots from Are You Afraid of the Dark and Tales from the Crypt. My older sibling Leah and I had some extra authority, since we lived in a house that might actually be haunted; the daughter of the previous owners had been brutally murdered while walking home from the local middle school, a year or two before Leah was born.

But the stuff from my childhood that haunts me isn’t memories of the front door inexplicably opening, or the graffiti we found in the corner of the basement. They’re reminders of a very particular kind of helplessness and vulnerability that defined my childhood. And those reminders come back in inconvenient, unexpected moments: taking a martial arts class, getting yelled at by a passing motorist, wondering at the grocery store how far I can stretch twenty dollars. It took me years to realize that most kids didn’t have childhoods like mine, and that they didn’t carry the memories of them around like a heavy, out-of-season, moth-eaten coat. It’s not hard to explain why a man taking off a belt and snapping it makes me freeze in fear. Harder to explain is why I can’t stand the taste of mayonnaise, or that the smell of disinfectant fills me with dread and anxiety.

In his article “Trauma and Temporality,” Robert Stolorow likened these experiences to the Portkeys of the Harry Potter books: normal, everyday objects imbued with the power to transport those that touch them, sometimes against their will:

“Experiences of trauma become freeze-framed into an eternal present in which one remains forever trapped, or to which one is condemned to be perpetually returned through the Portkeys supplied by life’s slings and arrows . . . [I]n the region of trauma all duration or stretching along collapses, past becomes present, and future loses all meaning other than endless repetition.”

Common perceptions of post-traumatic stress hinge on this idea of messy temporality; flashbacks, intrusive thoughts, and dissociation are the most commonly known and understood symptoms. Harder to understand is the slipperiness of the memories themselves, that the experiences are dim and barely remembered; that I am left only with the sense-memory of being out of control, suddenly sick with dread, or hypervigilant. Cathy Caruth, another trauma studies theorist, claimed that trauma is “a history that literally has no place, neither in the past, in which it was not fully experienced, nor in the present, in which its precise images and enactments are not fully understood.”

Horror stories were a touchstone throughout my youth. They made sense in a way I’ve since struggled to articulate. But horror makes the weird and uncanny manifest. It dramatizes what Gina Wisker called the “unthinkable, unnamable, indefinable, and repressed.” Horror gives our nebulous fears a shape, sometimes a name. It looks unflinchingly at the dark shadows we only see in our peripheral vision, and gives us a vessel to hold our undefined dread.

Horror films and ghost stories externalized all the ruptures in my sense of reality: they gave me monsters I could point at (sometimes in laughter) and voice to all the screaming I wished I could do. It gave me walls that bled ectoplasm instead of water from the holes in the roof. It showed me that it was normal to jump at shadows when you already knew monsters were out there. Here are the rips in reality, it assured me, and here are the things that slip through. It’s not just you. The whole world has the potential to be haunted. 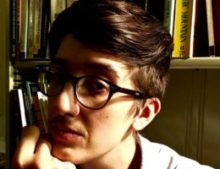 Nino Cipri is a queer and nonbinary/trans writer, currently at work on an MFA at the University of Kansas. A multidisciplinary artist, Nino has also written plays, screenplays, and radio features; performed as a dancer, actor, and puppeteer; and worked as a stagehand, bookseller, bike mechanic, and labor organizer. Their writing has been published by Tor.com, Fireside Fiction, Interfictions, The Journal of Unlikely Entomology, and other fine venues. You can connect with Nino on Facebook and Twitter @ninocipri, or on their website, ninocipri.com.