We’ve been fascinated by ghost photography since the 1860s, when Victorian-era photographers began to find evidence (of spirits or of double-exposure) in their work. At the time there was also a fascination with death photography, those utterly heart-breaking and deeply disturbing photographs of dead loved ones propped up for one last picture. Were the bereaved hoping to catch a glimpse of the soul in those photographs?

Then, as now, people were looking for proof that ghosts exist. Because if ghosts exist, then the soul does, and we do not end when our physical bodies die. If that part is real, then maybe this part is. This is one reason we try to identify ghosts photographs; to prove that they are true.

We also like to be scared, and fear feeds off reality. If the ghost is real, and we can identify why they might be tied to earth (anger, guilt, remorse, sorrow, regret) then our fear is justified. I can’t remember the first time I looked for a ghost in a photograph, but I do remember being around eight years old, at a cemetery, trying to avoid stepping anywhere a body might be because someone at school had told me that was a sure way to get yourself haunted. Somebody took photos; I can remember posing, and others around me posing. I never saw the prints, but I did sometimes wonder if there was a ghost standing behind me, hand on my shoulder.

Can you imagine seeing such a thing?

Ghost tours in haunted places are hugely popular. Everything about these abandoned asylums is disturbing. The sense of confinement, and the suffering of the inmates (and, in the case of the men locked in the high security ward I visited not long ago, their victims). The crumbling walls, the small remnants of habitation left behind, hints that people really did live here.

The tours themselves are fascinating and fun, but what most people want to do is find proof. Everybody takes photographs, hoping to capture a ghostly image. It’s the photos taken that are what people really go for. I took this one at the Aradale Asylum in Victoria, Australia, when we were locked in the high security ward. I snapped it quickly, without thinking, and only later saw the possible figure to the right, near the toilet. 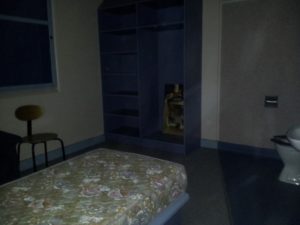 Geoff Brown, a writer and publisher who runs the ghost tours at Beechworth Asylum, also in Victoria, Australia, gave me these photos. I’ve been on tours at Beechworth as well, and I can tell you that there is a moment on every tour—usually after someone has lain down, flat and cold, on the mortuary table—that no one takes a photo. It’s as if, in that moment, we really don’t want to know. These pictures were taken by other tour goers. 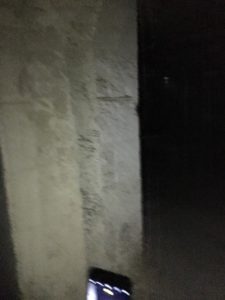 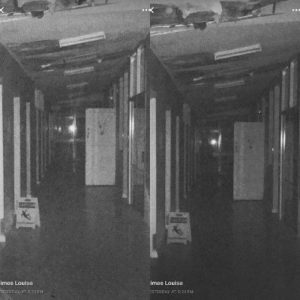 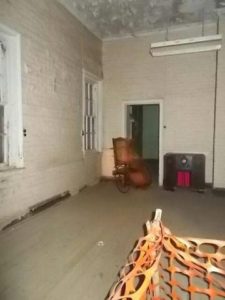 Imagination is a key part. Our brains fill in the gap, trying to make sense of things, finding form and patterns, shapes we can understand. It’s why we see faces in electrical outlets and human figures in trees.

I have a pile of old photographs I’ve collected at yard sales and thrift stores. None of them with people, because that seems a bit exploitative. I put them on a table at events and ask people: what do you see? Which photo has a ghost in it?

Even the most ordinary of photographs carries ghosts, stories. That series of photographs I collected in various second hand shops? They are ordinary photos, of family homes and holidays, of vases filled with flowers and tables set for one. I don’t know any of the history, but I can see it nonetheless: here is an early widowhood. Here is a cheap holiday. Here is preparation for a party. All of the photos, all photos, carry the ghosts of history. Even the simplest, the most ordinary. There are stories in all of them. The relationships, the future death, and the past.

There are the famous ghost photographs; Grandpa in the car. Daughter at the graveside. Dead Marine in the group photo. All of them draw me in and make me wonder at the story behind them.

One of the most famous photographs is the Tulip Staircase (oddee.com/item_97817.aspx), and this is the one that inspired a recent story. Taken by a reverend, it shows a person dragging themselves up a staircase. When I first looked at it, the image was fainter, but I swear that every time I look, it becomes clearer. I wondered; why is she dragging herself up? Where is she going? What is she escaping? From that, my story “Crisis Apparition” was born.

Among the many other writers who’ve played with photos and photographers are Stephen Dedman in “Never Seen by Waking Eyes,” Ernest Favenc in “The Land of the Unseen,” and Rick Kennett in “Due West.” These are just Australian authors from a single anthology, Macabre, edited by Challis and Young.

A horror story is a snapshot, in a way, a capturing of the ghost on the page.

As writers, we are fascinated by the story behind.

Ghosts’ stories are usually dramatic and unexpected. Most ghosts don’t die in their sleep. There’s the Brown Lady (so many ghosts are described by their colour!), Lady Dorothy Townsend, whose husband allegedly locked her in her bedroom after discovering an adulterous affair. My tulip staircase ghost could be a maid who died on the stairs (Who pushed her? How did she fall?) 300 years ago. And the girl in the fire of Wem Town Hall, who perhaps burnt down her own home in 1677.

They are murdered, forgotten, killed in war, guilty.

And they want us to know.

We give the ghosts voice. 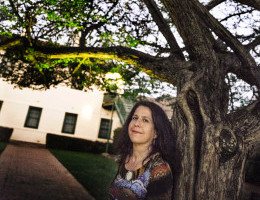 Shirley Jackson award-winner Kaaron Warren published her first short story in 1993 and has had fiction in print every year since. She was recently given the Peter McNamara Lifetime Achievement Award and was Guest of Honour at World Fantasy 2018, Stokercon 2019 and Geysercon 2019. She has published five multi-award winning novels (Slights, Walking the Tree, Mistification, The Grief Hole and Tide of Stone) and seven short story collections, including the multi-award winning Through Splintered Walls. Her most recent short story collection is A Primer to Kaaron Warren from Dark Moon Books. Find her at kaaronwarren.wordpress.com and she Tweets @KaaronWarren.