The urgency that pushed many of us into quarantine last March has dissipated considerably. Still, it’s not hard to recall the surge of panic we felt at the unprecedented panic buying and orders to shelter in place. “It’s like the plot of Contagion,” our friends on social media exclaimed. And indeed, despite the spring of 2020 unfolding like nothing any of us had ever experienced, there was something about the start of the pandemic that felt eerily familiar.

Confused over whether directives from the government were a recommendation or a requirement? That sounded an awful lot like the prelude to Paul Tremblay’s Survivor Song. Fleeing the city for Maine or rural Rhode Island, barring problems at interstate border checkpoints? Refer to Justin Cronin’s The Passage. Disquieted by the empty streets and abandoned stores, stadiums, and museums? Revisit I Am Legend . . . or 28 Days Later . . . or A Quiet Place.

Even the second phase of the pandemic had its blueprint in our fiction and films. The people with whom we worked at medical institutions and essential businesses, the family members with whom we sheltered at home, these were the refugees in Joe Hill’s The Fireman, the uninfected barricaded inside the mall in George Romero’s Dawn of the Dead, or Josh Malerman’s band of blindfolded survivors in Bird Box and its sequel, Malorie.

One thing, however, allowed us to endure the distressing news articles and endless anterior nasal swab tests, to weather the illnesses and even the deaths of our loved ones, colleagues, and friends. It’s the greatest common denominator across post-apocalyptic stories, and it’s that humanity would persevere. We had delivered the antidote, learned to live without sight or sound, shot the zombies in the head. We had vanquished the vampires and detonated a bomb inside the asteroid . . . of course we would discover the solution to COVID-19.

The very name of this horror subgenre—post-apocalyptic—prescribes our inevitable success. Though the Oxford English Dictionary defines “apocalypse” as the complete and final destruction of the world, one little prefix transforms the narrative so that there will always be someone left to tell the tale. The Book of Revelation’s prophecy of end times and references to the final battle between good and evil made it clear that the apocalypse was something only the worthy would survive. Today, having declared sovereignty over the planet and all of its species, “worthy” simply means “human.” Ultimate destruction and cataclysmic events are mere roadblocks for human beings to conquer.

The Greek word apokalypsis, from which “apocalypse” is derived, means an unveiling or revelation. A more fundamental approach, then, to the idea of the apocalypse is that it’s an uncovering of that which had not previously been known. This classification doesn’t gel with modern usage any better than our end-of-the-world-but-not-really approach: we know the ending to every post-apocalyptic blockbuster, every plague novel and zombie thriller, because every one of them ends the same. One year after the onset of the COVID-19 pandemic, with the majority of the country set to be vaccinated by the end of summer, we’ve been proven right in our certitude yet again. Will there ever be a foe— climatic, astronomical, medical, fantastical, or otherwise—we don’t vanquish with all the spectacle and self-congratulatory drama of the Boulder Free Zone Committee defeating Randall Flagg?

That answer can be found on the same streaming platform as that of myriad post-apocalyptic fare. David Attenborough’s 2020 Netflix documentary, A Life on This Planet, warns that, should humans continue to ignore the earth’s rapidly decreasing biodiversity, we will experience a mass extinction event within the next one hundred years. The English broadcaster and natural historian warns that we are poised to go through a series of one-way doors, spurred by deforestation, pollution, carbon emissions, and biodiversity loss, and resulting in events that will make our year spent in COVID-induced isolation seem like a vacation.

The events in question read like the script of a dozen post-apocalyptic movies thrown together, and include forest dieback, mass extinctions, flooding, drought, exponentially increased carbon emissions, and the thawing of the permafrost. Landslides, rising acidification of the ocean, crashing fish populations, and the loss of pollinator species will contribute to food production across the globe reaching critical levels. We can expect additional pandemics, a rising sea level, and a planet that is seven degrees warmer by 2100. A quarter of the human population will inhabit places with an average yearly temperature over eighty-four degrees Fahrenheit. Millions of humans will be forced into migration. Borders will shut. World-wide conflicts will erupt.

Attenborough’s is, of course, a single view on the climate challenges that face us, but his is as close to the majority of actively publishing climate scientists as any other, and far more accessible to the general public. And remember, this is a general public that consumes post-apocalyptic stories regularly, as a way to face its fears of the future; somehow, however, we have not found this particular fear as worthy of exploration.

For many writers, when asked for their greatest marker of success, the answer is to have produced work that exceeds their lifetime, work that lasts. But what if the amount of time in which that work can last is finite? If post-apocalyptic fiction is a way to hold up a mirror to our actions, to play out the possibility of causing our own extinction, then why haven’t we been scared straight? The first apocalyptic novel—besides the Book of Revelation—is generally agreed to be Mary Shelley’s The Last Man, published in 1826. In almost two hundred years of zombies, plagues, AI takeovers, alien invasions, nuclear fallout, and natural disasters—of torturing, warning, scaring, thrilling, and challenging ourselves with what-ifs—we’ve destroyed the earth more, not less.

Perhaps it’s time for a new subgenre, a different tactic, a more concentrated approach. Anya Martin wrote of a similar call to arms in her H Word essay, “The Weird at the World’s End,” but beyond the weird, beyond “regular” horror, are there other ways writers can push the boundaries on socially-conscious themes? What would post-human horror look like? Can we even conceive of such a thing? If Alan Weisman’s eerily captivating nonfiction book, The World Without Us, is any indication, the earth without humans—at least, once our plastics have photodegraded, our oil fields burned out, and all other remnants of us are eliminated—wouldn’t be horrific at all.

But necessity is indeed the mother of invention, and besides those one-way doors of which Attenborough speaks, for most writers, putting pen to paper is an equally necessary task. Removing the “post” from our post-apocalyptic fiction, imagining the aftermath of an apocalypse humanity doesn’t survive, these exercises can only help us cultivate creativity from the world around us (the actual world, polluted, warming, gaseous, and dwindling in biodiversity as it is), as ecofiction master Jeff VanderMeer suggests. Only then will we concede to our responsibilities as the only forward-thinking species on Earth. Only then will we recognize our post-apocalyptic stories for the desperate distractions they are. 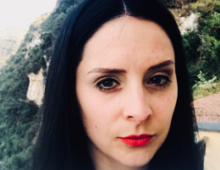 Christa Carmen’s debut collection, Something Borrowed, Something Blood-Soaked, was published in 2018 by Unnerving, and additional work has been featured in Fireside Magazine, Year’s Best Hardcore Horror, as well as the Bram Stoker-nominated Not All Monsters: A Strangehouse Anthology by Women of Horror and The Streaming of Hill House: Essays on the Haunting Netflix Adaption. When she’s not writing, she keeps chickens, uses a ouija board to ghost-hug her dear departed beagle, and reads books like Mary Who Wrote Frankenstein and The Ghastlycrumb Tinies to her daughter. Most of her work comes from gazing upon the ghosts of the past or else into the dark corners of nature, those places where whorls of bark become owl eyes and deer step through tunnels of hanging leaves and creeping briers only to disappear.