Truth is more horrible than fiction. The complex and mysterious ritualism of the Catholic Church has always fascinated horror writers, regardless of their personal convictions: the Irish Protestant Bram Stoker (Dracula) fell back on Latin orthodoxy to inter the undead, and the non-denominational demi-Buddhist James Wan (The Conjuring) idealized a Roman Catholic couple to expel the unclean. The demonic antagonists of horror fiction, therefore, naturally hate the faith and seek to poison it however they can; but they can do nothing—nothing—that even compares with the hellish pestilence of conspiracy and rape that is the truth for believers today.

As a horror-writing cradle Catholic, I’ve always insisted that one of the great scary story benefits, along with catharsis, is inoculation: a mind that’s been exposed to evil in trace amounts, thus building up a certain tolerance, is arguably better equipped to withstand a real-life encounter. I’ve also always feared that the depicting of evil, though inevitable and necessary, is a somber undertaking for the storyteller. Evil is, by its very nature, tempting; you can’t portray it in any meaningful way without becoming a vessel for its allure. Catholics are notorious for not knowing their Bibles, but I often reflect on Jesus’ remark: “Woe to those by whom temptations come! It were better for them to be cast into the sea with a millstone hung about their neck” (Luke 17:1-2).

To a non-believer, the point may seem moot, but consider: even if the serpent on the knowledge tree is a metaphor, there’s still a reptile coiled around your brainstem. Lovecraft was an atheist, but he clearly managed to net a few of the massive shadows gliding through the icy murk of our collective unconscious, or his work wouldn’t resonate with such wide, still-spreading ripples. And, like his good friend Robert E. Howard (suicide by gunshot), he neither lived nor died in happiness. Their fate is not, of course, unavoidable—but it’s a stern admonition to those who strike matches in the basement of the intellect. We all know Nietzsche’s maxim about the hazards of the gaze; an exorcist or vampire-hunter might well add that when you enter the Abyss, the Abyss enters also into you.

So, what is one to do? J.R.R. Tolkien’s answer was to show evil only by its effects, like Perseus gazing at the Medusa through Athena’s mirror-shield. We’re shown the wasteland of Mordor; we’re shown the mindscape of Gollum. But around the enticing mysteries of Barad-dur is a fence with a sign: “Please keep back 100 meters from edge of Abyss!” What happens if you peek inside? Well, as Elrond observes, “It is perilous to study too closely the arts of the Enemy, for good or ill”—and by way of example, we see Saruman and Denethor succumb to that peril in ways that are tragic but ultimately contemptible. C.S. Lewis, in The Screwtape Letters (which was dedicated to Tolkien), answered the dilemma by making the Devil a ridiculous figure, noting that “Milton’s devils, by their grandeur and high poetry, have done great harm”—have, in other words, made evil too alluring.

JRRT and CSL, along with G.K. Chesterton (the Three Brits, as I call them), are my favorite writers in all of space and time. However—to me, at least—their answers on this particular problem are profoundly unhelpful. GKC once said of writing horror, “I will ride on the Nightmare; but she shall not ride on me.” But Chesterton never created a singular, seminal monument of fiction—in fact, neither did Lewis. The one who brought forth an absolutely unparalleled monolith of creation was the quiet scribbler in the corner, the deeply depressed and truly obsessed Professor Tolkien, the one possessed by a vision: the one who most definitely took fair and regular turns as both the Nightmare’s rider and her steed. In his correspondence—i.e., when his rational mind was driving—he often hinted at a tugging sense of guilt for the heathen undercurrents in his fiction; and he denounced The Screwtape Letters for taking a demonic viewpoint character, even as a literary device/joke. Clearly, he was a man with a fundamental conflict, even a bifurcation, in his soul. And I’ve come to believe that his incredible power as a writer arose, not despite that conflict, but precisely because of it.

Look at our immortals. Homer wrote epics praising war and the gods, yet matter-of-factly portrayed human life as a miserable chessboard for Olympus, and routinely referred to Ares as “the curse of men.” The Beowulf-poet, demonstrably an educated Christian (despite attempts by later scholars to make him a pastiche of illiterate pagan scops), toiled heroically to make space in a post-evangelized universe for his noble pre-Christian forbears. Shakespeare, vehemently claimed by modern Catholics and Protestants as a closet Jesuit or a proud Elizabethan (respectively), has also been credibly represented by Harold Bloom as a fricative neo-Gnostic; and the tension between his Christian upbringing and his heretical personal beliefs may very well have been the genesis of Macbeth. Even Milton, a browbeatingly severe Puritan, certainly felt some attraction to the Fallen Archangel to make him the subject of a twelve-book epic. All of these literary titans were inspired, willingly or not, by the struggle between professed convictions and nigh-irresistible visions of an irreconcilable reality.

Homer and his rough contemporary Hesiod spoke often of being thus inspired, even indwelt, by personal spirits which they called muses. Plato described the poetic state of mind as being outright possessed. It’s interesting that Homer, like the Beowulf-poet and even Shakespeare himself, is still theorized by some academics to have been not one person but several, or even many. Again, as a Biblical Catholic, I can’t help thinking of the demon-swarm in the tomb-dweller, who infamously told Jesus, “My name is Legion” (Mark 5:9; New American Bible).

So, again, how does one resolve this friction between the opposing selves that smash together as the echoes of Good and Evil vie for voice in a creative work? I would argue that the only hope for the art (as distinct from the artist) is the tenuous maintenance of that exact friction. Not a balance! Rather just the reverse: a wild, precariously swaying seesaw right on the brink of a ten-thousand-foot drop onto spikes. Let one voice hold the upper hand too long, and your work becomes mere polemic. Owen Barfield, longtime friend of Lewis and Tolkien, said that to write love poetry, you must be in love—but to edit the results, you must be out of it. In the same way, we must let ourselves be at one moment wave-thrown jetsam, red meat in powerful, merciless jaws—and at the next moment, coolly in command of the dueling cyclones within. No doubt this is true of any meaningful artistry, but I suspect it’s especially crucial for the horror writer, constantly working with the radioactive materials of ancient racial memories, ancestral dreads, and subconscious hatreds and rapacities. And, if you believe in such things, with the charred, mesmerizing raw materials of Hell.

Everyone is familiar with The Exorcist, and it’s just as terrifying for materialists as it is for believers. But there’s a less well-known book that came out around the same time: Hostage to the Devil. Unlike Blatty’s work, it claims to be pure nonfiction, based on interviews with both the priests and the victims in five modern-day American exorcisms. The author was a man called Malachi Martin, a laicized Jesuit priest with enigmatic ties to the Vatican of the 1960s. Non-believers might shrug at this less dramatic presentation of evil, but I found the book so blood-freezingly compelling that I went on to research Martin himself—and I’ve come to wonder if the man fell victim to precisely the danger we’ve been talking about. Ostensibly in service to God, he seems almost reverently meticulous in transcribing page after page of demonic blasphemy; and the opening chapter of his novel Windswept House reads like a DIY manual for Satanic rituals. But even if the man was possessed or insane, it doesn’t necessarily mean he was wrong. He spoke at great length about the near-total domination of the Catholic Church by Satan—and, as we’ve seen, the reality is far more horrible than any anti-Papist theory spun by the likes of Dan Brown.

Malachi Martin said one more thing. He asserts that there’s a state called Perfect Possession, in which the soul of the human host becomes utterly and forever fused with the indwelling demon-spirit. At this point, he says, not even God himself can save the victim from the dark. This is a grim fate. This is to be feared, not sought after. The soul of a horror writer is infinitely more important than producing a good piece of horror fiction. But.

When it’s time to sit down and write—in the time of possession by the muse—we can’t be worried about our souls. We can’t fret for our safety or bother about our sanity. In the writer’s hour, when the Eternal breaches the everyday and the pen is the only bridge, we have to be possessed. We have to be the art, not the artist. When the work is done and it’s time to proofread, then our quotidian self should resurface; but till then, our fiction is The Truth. Til then, there’s no reality but the tale we exist to tell. In that time, we may be swatted back and forth by viciously battling gods; we may be ridden, raped, and Perfectly Possessed. But whether the story calls for glorifying a church in which we don’t believe, or beautifying a devil in which we do, what the story needs is what matters. Nothing else.

So, in conclusion, what do you do when your fiction goes off the rails and careens toward some horrifying truth? What do you do when you realize your defining beliefs are chained to the sacrificial altar, and the one thing standing between the runaway story in your head and its cataclysmic manifestation in the real world—is you? 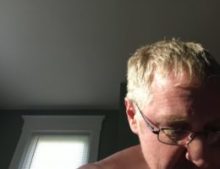 J.B. Toner studied Literature at Thomas More College and holds a black belt in Ohana Kilohana Kenpo-Jujitsu. He has published two novels, Whisper Music and The Shoreless Sea, and innumerable shorter works. Toner lives and works in Massachusetts with his beautiful wife and their beloved daughters, Sonya Magdalena and Rebecca Eowyn.