The H Word: On Cruelty

In a recent piece for Vulture (bit.ly/2Gy35VN), Angelica Jade Bastién makes the case that horror shouldn’t be defined by what people find scary but by “the underlying sense of fear, and the exploration of this primal response on personal, cultural, and existential levels.” Her essay is fantastic and does a lot of work to explain what makes the horror genre so interesting and necessary.

Bastién’s article made me think a lot about what draws me personally to horror. Fear is certainly a part of it. My novel Break the Bodies, Haunt the Bones explores fear through a haunted town where ghosts possess the living and change them forever, where economic hardship gives people all the excuse they need to hate those who are different, where any change at all is threatening for a place where nothing new has ever been good. But more than fear, the reason that everything I write is tinged with horror is because I’m fascinated by another primal force: cruelty.

Growing up, I was a shy, tenderhearted kid. School was not a good place for me, and I remember being astonished by my classmates’ naked viciousness. When a girl’s skirt rode up from the friction of her backpack, people pointed, nudged their friends, grinned at her without saying anything. Someone was sent home once for lice, and that would come to define her for years, a stain that she and every one of her sisters had to carry. Once, I sneezed into my cupped hands and, with snot covering my face and palms, begged a friend to go to the bathroom and bring me a paper towel. He ran away and came back with a group of people, telling them to look, all of them following me across campus to take joy in my embarrassment.

Once, a couple of guys in my math class found out that I had a crush on a girl. They dragged me from my desk and forced me to kneel in front of her. With their knees in my back and their fists full of my hair, they pressed my face into her desk and made me say that I liked her in front of everyone. I don’t remember where our teacher was during any of this. In my brightest, angriest memories from school, there are never any teachers.

Anyone who’s gone to school knows the cruelty of children, how the least difference or deviance from the norm is seized upon, hooted at, hammered down. God help you if you look anything like a celebrity or cartoon character. I don’t have to tell you how they laughed with every shitty thing they did, though none of it was ever really funny.

In class one day, a girl declared that one of the underclassmen smelled like trash. She went around the room, making everyone agree with her. So they wouldn’t hassle me, I agreed too. All this, I suppose, so she could tell him later, “You smell bad. We all talked about it. Everyone thinks so.” And for a moment, feeling like I was a part of this group, on the inside instead of the outside for once, I understood the utility in being cruel. But I felt ashamed too, disgusted with myself and full of regret.

Once in seventh grade, in the basketball locker room, a group of older boys were trying to hang me by my belt loops from a clothes hook. They kept lifting me into the air, and I twisted out of their grip each time, dropping to my feet on the floor. A boy several years older gestured for everyone to stand back, and I thought he was telling the others to stop, that things had gone far enough. He sucker-punched me in the stomach. While I lay doubled over and unable to breathe, he picked me up and dropped me onto the coat-hook, tearing my jeans and leaving me there.

Away from school, I played alone in the woods and creeks surrounding my grandmother’s house. I was taught to hunt and fish, and here too was cruelty. Every spasming worm or kicking cricket I shoved down onto a fishing hook bothered me. Every fish whose mouth I tore open as I pulled out the hook, only to throw it back because it was too small. Every small animal I shot, chest fluttering on the ground, and every autumn-clothed doe trailing her cautious fawns that I pointed my gun at. I was never very good at hunting or fishing, and that was always okay with me.

I don’t have anything against hunters or eating meat. Cruelty is ordinary, woven into the world. Everything seems to live to hurt something else. When I buy meat from the grocery store, I understand that it comes to me from factory farms where animals live in such vile conditions that we aren’t allowed to see them. My produce comes from spreading fields of genetically identical crops that crush ecosystems and smother out every beautiful thing that’s ever lived.

I spend so much time tonguing this sore, trying to understand or at least live with it a little easier. There is no movie about a clique of vicious teens that doesn’t fascinate me. I will never forget Stephen King’s Carrie drenched with pig’s blood during the moment she thought she was safe, surrounded by friends, finally accepted. I love Prudence Night in Chilling Adventures of Sabrina, and Theo quickly became my favorite character in Netflix’s The Haunting of Hill House.

Part of what I like about these characters is that they take a question that’s obsessed me my entire life—“Why would you treat another person this way?”—and they give me an answer.

Usually, the answer is trauma. People are cruel because they have suffered, stories tell us. Why would Theo be so awful to the girl she took home from the bar, someone who was kind and made herself so vulnerable? Because when Theo touches another person, her psychic gift overwhelms her with their anxieties and fears. She has to drive people away to survive.

Or cruelty can be a way of reclaiming power. It can feel righteous so long as you’re cruel to the people who you’ve decided deserve it. Heroes like the Punisher tell us this, that some people deserve to hurt, and in our worst moments we relish the chance to wound someone who has earned it.

But outside of fiction, I don’t think cruelty often has a nuanced explanation. People don’t need complicated reasons for being shitty to each other. The calculus is simple: when others are small, they feel large. When they cast someone out of a group, it cements their place inside. Cruelty is easy. You can wound another person by refusing to notice them at all.

Good horror, I think, can be interested in cruelty as a way of bearing witness. People do terrible things for terrible reasons, and it’s important that we pay attention. My story “Church of Birds” is a sequel to the Grimms’ tale “The Six Swans.” When the swans are transformed back into human brothers, the youngest still has a swan’s wing in place of his left arm. In my story, his siblings take him into the woods, hold him down, and start tearing out his feathers, trying to find the arm buried beneath his wing. Their reasons aren’t interesting except in that they are so common, so human, so boring and ordinary.

By showing us moments like this, making us face cruelty, horror asks us to look, to be bothered by what we see, to be a little better than we might have been otherwise. Horror says to us, “Things like this have always happened, and they will happen again. Maybe you’ve done them yourself.” What we do afterward is up to us. 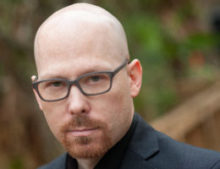 Micah Dean Hicks is a Calvino Prize-winning author whose writing has appeared in The Best American Science Fiction and Fantasy, The New York Times, Lightspeed, and Kenyon Review, among others. His story collection Electricity and Other Dreams is available from New American Press. Hicks teaches creative writing at the University of Central Florida. His new novel Break the Bodies, Haunt the Bones is available from John Joseph Adams Books.