The horror audience runs a wide spectrum, but at either end are two extremes. These polarities are divided not so much by conflicting interests as by degree of morbidity.

At one end we have people who enjoy horror where the supernatural mayhem is kept in check. Their outré quotient is relatively slim. The internal logic of a horror story must hew closely with everyday life. They take their horror as a teetotaller does honey; a mere tincture to tease the palate.

On the opposite extreme is a group that regards the whole phantasmagoria of horror like an all-you-can-eat banquet. Their hunger for gruesome delicacies is insatiable. Never ones to heed the “No Trespassing” signs that have been hammered into place for their protection, these ghouls seem only too willing to step over the barbed wire fence to creep through that taboo land. And the more littered with bones it is, the more grandiose the campfire legends are surrounding the place, the happier they are. To them there is nothing more gratifying than watching the fixed laws of reason swallowed up by shadowy forces.

There exists a particular type of horror that services this cabal. Not a subgenre per se, but perhaps a different “level” of horror fiction: Nightmare Horror.

By “Nightmare Horror” I do not necessarily mean stories that involve characters who experience bad dreams or stumble about in a feverish haze. (Although there are certainly noble examples of those: See H.P. Lovecraft’s “Beyond the Wall of Sleep” or Guy de Maupassant’s “The Horla.”) No, Nightmare Horror is any work so steeped in the uncanny and the darksome that it manages to pierce through our logical safeguards, providing us with an experience akin to our most intense nightmares.

In most horror stories, the great Menace-From-Beyond sneaks into a world we recognize and are desperately afraid to see contaminated. And because some—perhaps most—readers fear a dissolution of consensus reality, there is a general preference for stories where at least one character takes up the good fight to protect an established way of life. Hence the derivative plots of pedestrian horror fiction, where the only conflict is cardboard protagonists fending off paper tigers of evil.

Nightmare Horror, by contrast, cares nothing for the status quo. It defiantly snubs not just the rules of waking reality, but also the guidelines that writers customarily draw upon to create “good fiction.” It offers neither postmodern “meta-textual” playfulness nor comic relief (save only for the blackest irony or the most decadent gallows humour). Such a strong concentrate is bound to be toxic to some, ambrosia to others. If most horror truly is the literary equivalent of a roller coaster ride that ends with us being delivered to the same platform we departed from, Nightmare Horror is an elevator to Hades. Its creators offer no upward return. They simply seduce you inside, and once the doors are shut they cut the cable.

In these stories even the most banal of objects radiate a numinous energy, and all the gauges we use to test a story’s believability (convincing dialogue, real-world locations, plausible character motivations, etc.) are insidiously turned against the reader. Everything sweats menace. We also find no moral-of-the-story. Nightmare Horror offers neither consolation nor closure. The normality we perpetuate has irretrievably sluiced through the sewer grates at the edges of sanity, washed away by a high tide of resurgent atavisms from a cellar of consciousness.

Perhaps one of the main distinguishing traits of Nightmare Horror is its willingness to meet the monstrous on its own terms, rather than employing the monstrous as a convenient metaphor for some all-too-human purpose. The armchair Freudian analyst sheds precious little light here. Any post-reading autopsies will not decipher the “meaning” behind the terrors. Some of our nightmares truly are nothing more than encrypted messages that, once decoded, provide personal insights that can make us better citizens. Other nightmares are simply . . . horrors. No point in trying to shoehorn one of these latter specimens into your self-improvement plan. Its teratisms have no regard for your ambitions. Their true value is simply the experience they offer: that rarefied state of shock and awe when the snug walls soften and the water spins the wrong way down the drain.

As Charles Lamb observed in his 1821 essay “Witches and Other Night-Fears”:

“Gorgons and Hydras and Chimeras—dire stories of Celaeno and the Harpies—may reproduce themselves in the brains of superstition—but they were there before. They are transcripts, types—the archetypes are in us, and eternal. How else should the recital of that which we know in a waking sense to be false come to affect us at all?”

The most potent works of Nightmare Horror are almost always shorter in length, for in order to sustain a novel-length narrative a writer must dilute the concentrate in order to spread it across a higher page-count.

As an author I confess that my own creative drives are more rooted in Nightmare Horror than in any other mode of fiction. I fashion my work to convey images that carry with them a sense of the oneiric. A good number of my stories (or the abnormal images within them, at least) are drawn from my own nightmares. I have never felt the need to analyze my dreams, the lion’s share of which are decidedly Nightside in nature. Instead I pursued prose writing in order to give these dreams a vessel so that others could experience them in some way if they so desired.

I believe that my fiction is less manufactured writing as it is reportage. I transcribe what I see and I make no distinction between my waking life impressions and those I experience during slumber. Consciousness, I believe, is a continuum. It is seamless. Its boundaries are only the ones we impose upon it.

That being said, I respect the fact that in order to convey my dreams appropriately I must furnish them with a certain degree of narrative context. Now, which is the more important of the two—the nightmare seed or the narrative tools required to tend and hatch it—is a riddle reminiscent of the chicken or the egg. Arguably neither element is strongest on its own. Without some form of traditional narrative arc, however warbled, the nightmare remains a subjective experience. Subtract some shading of the otherworldly and fiction becomes either mimetic or dependent on shock tactics that rarely stimulate anything beyond the gag reflex.

So in the end, perhaps Nightmarish Horror is made such by how wide its creators want to rend the veil. For some the mere suggestion that the universe is dark and deep is enough. And so, for them, are the horror authors who administer eeriness with an eyedropper. The rest, for whom too much is never enough, I’m confident that there will always be authors like myself, ones who are always willing to dive headlong into the abyss. 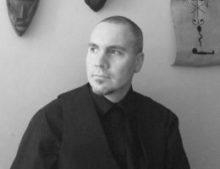 Richard Gavin is regarded as a master of visionary horror fiction in the tradition of Arthur Machen, Algernon Blackwood, and H.P. Lovecraft. His work has appeared in The Best Horror of the Year, The Magazine of Fantasy & Science Fiction, and the Black Wings anthologies. His books include Charnel Wine, Omens, The Darkly Splendid Realm, and At Fear’s Altar. S.T. Joshi calls Richard Gavin, “one of the bright new stars of contemporary weird fiction.” Gavin has also published criticism in venues such as Dead Reckonings and Rue Morgue, as well as esoteric essays in Starfire Journal. His column “Echoes from Hades,” featuring various Gothic musings, can be found on the acclaimed website “The Teeming Brain.” Richard’s own website is www.richardgavin.net. He lives in Ontario, Canada.