For generations, the monsters populating horror fiction have, with very few exceptions, belonged to the scary trinity: vampires, werewolves, and zombies.

For every aswang, a dozen Draculaesque vampires sip bodily fluids. For every huli jing, a score of humans transform into their wolfish selves under a full moon. For every draugr, a horde of reanimated corpses out of central casting shambles by looking for brains.

Horror authors have struggled for years with varying degrees of success to bring a fresh twist to the tropes of the scary trinity, but these lately those tropes are wearing thin.

We have been telling tales about monsters ever since we first found our way out of the darkness and sat together around a fire, and every culture has a long list of what scares them most. Many of these creatures of myth and folklore are fascinating . . . and can be a strange and wonderful cornucopia of material for horror authors (and readers).

Maybe you haven’t heard of these monsters from mythology and folklore:

The adze, found among the Ewe people of Southern Ghana, assumes the shape of a firefly and enters a home through a keyhole. The tiny monster drains children—especially infants—of their blood.

No magic or net or insecticide can keep the adze away from its victims. The only way to destroy it is to capture it. When captured, it reverts to its human form and can be disposed with the usual methods for dispatching humans. But the adze are especially charming and charismatic, which makes the task of killing them difficult.

The busaw is a ghoul from the Philippines who looks and behaves like an ordinary human being—until night falls. If a man cocks his head to listen for the sounds of death as the sun goes down, this is a sign that he is actually a busaw.

In his demon form, the busaw has pointed teeth, hooked nails, and a long tongue. He creeps around in cemeteries and steals corpses, replacing the bodies with the trunks of banana trees.

The busaw’s greatest talent is his ability to turn human corpses into pork. (He’s also a pretty good cook.) Once he returns to his human form, he often prepares a nice feast for his neighbors. Eating the busaw’s pork, as delicious as it is reported to be, will turn unsuspecting neighbors into grave-robbing ghouls.

Inhabitants of busaw infested areas keep them away by washing corpses with vinegar and rubbing them with strong-smelling herbs. Liberal application of salt is also supposed to help.

The churel, from India, is the vengeful spirit of a woman who died an unnatural death. The churel is usually depicted as a woman with sagging breasts, a black tongue, and wild hair. Her most notable feature is that her feet face the wrong way.

Her victims are usually male family members, but occasionally she will attack an attractive, unrelated man. She tempts the men with food; if they follow her, she keeps them with her until dawn, which is long enough to turn their blood to dust. When she returns the men to the village, they are desiccated and old.

The zemu is a Moldavian spirit that appears to widows in the form of a flame before it transforms into a man and enters her bedroom for a night of passionate lovemaking. Some believe the Zemu is an incubus that drains away the widow’s life force. Others believe the zemu is conjured by a murdered husband to exact revenge.

Whichever is the case, the outcome is the same: The widow is dead by morning.

Adlets are a vicious hybrid of human and dog that terrorize the Inuit people. According to legend, a girl who lived with her father and refused to marry decided to mate with a giant red dog. The result of this unlikely pairing was ten offspring. Five had the head and torso of a human and the bottom half of a dog. The other five had the reverse.

The girl’s father was not pleased by this situation and the increased number of mouths to feed. He banished the little family to an island and drowned the dog father. The girl, desperate to save her children, set five of them out to sea in a boat. The other five she sent inland to fend for themselves.

The pups that sailed across the ocean landed and mated and spawned Europeans. The children who were sent inland became adlets. They grew into fierce predators with a taste for human blood. Even today they wander the tundra in packs searching for human prey.

From Slavic mythology, rusalki are the spirits of pregnant, unmarried women who have been disposed of by their lovers. Although they sometimes appear as hideous and bloated corpses, they most frequently appear as beautiful women.

The rusalki watch for handsome men and attempt to lure them with songs and dancing. If properly infatuated with their beauty, the men agree to join them in their home on the floor of the lake. (And because men obviously have difficulty breathing underwater, drowning is a common result.)

Men strong enough to escape drowning still have to contend with the rusalki’s deadly, shrill laugh. The piercing sound can kill even at a distance. Some believe that a rusalka is destined to haunt the lake for what would have been her natural life span. Others believe that once a rusalka’s death is avenged, she is free to move on.

Rusalki are often angry about their plight, and always dangerous. The only protection against them is for potential victims to entwine fern fronds in their hair.

These are just a few examples of the literally thousands of monsters in folklore and myth that have been underutilized in horror fiction. Monsters, whether they are metaphors for human fears or failings or the manifestation of external evil, are the most fascinating element of horror fiction. Western horror fiction, if authors take appropriate care to respect the culture from which the monster was borrowed, can only grow richer by embracing a wider tradition. 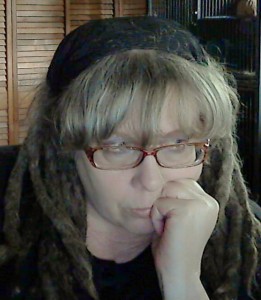 Kate Jonez writes dark fantasy fiction. Her debut novel Candy House, published by Evil Jester Press, is available at Amazon in print and ebook. Ceremony of Flies is forthcoming from Dark Fuse April 2014. She is also chief editor at Omnium Gatherum, a small press dedicated to providing unique dark fantasy, weird fiction or literary horror in print, ebook and audio formats. Three Omnium Gatherum books have been nominated for Shirley Jackson Awards. Kate is a student of all things scary and when she isn’t writing she loves to collect objects for her cabinet of curiosities, research obscure and strange historical figures and photograph weirdness in Southern California, where she lives with a very nice man and a little dog who is also very nice but could behave a little bit better.