The H Word: Getting What You Deserve

Remember when telling ghost stories on Christmas Eve was an integral part of the holiday? No?—Me neither, but that’s what they tell me. It’s a practice from before our time, a Victorian-era vestige that gave us the stories of M.R. James and A Christmas Carol and has since been all but eclipsed by Rudolph and Frosty and Charlie Brown’s pitiful little twig of a tree.

Christmas isn’t just about Santa flying through the atmosphere with a magical sack of toys in the storage compartment of his arcane sleigh. Before he was homogenized into a jolly old elf who doles out smiles and carefully-wrapped plastic crap, he rode the thermals with Krampus, his capering demonic sidekick whose purpose was the grinning, leering punishment of the boys and girls on the Naughty List.

In our safe, corporate Christmasland, we’ve downplayed the cost of being bad little boys and girls, while, traditionally, Christmas was a seasonal morality play in which the consequences could be as dire as anything from Tales from the Crypt or Creepshow.

You know the kind of story I’m talking about—the brisk, instructive narrative in which some dirtbag treats people like shit and is then forced to eat his or her just desserts. There’s usually some screaming involved.

Ebenezer Scrooge may very well be the forerunner of this character type—a trope that is every bit as much a part of horror fiction as the Haunted House, the Vampire, and the Deranged Killer. Scrooge gets a choice, though—the supernatural forces aligned against him on Christmas Eve offer him the chance to turn things around. In Creepshow, Mr. Pratt is afforded no such luxury—and there aren’t nearly enough Roach Motels in existence to save his wretched old ass.

The Comeuppance Fantasy is not to be confused with the Revenge Fantasy. They’re cut from the same cloth, but there is one important distinction between the two: POV. The Revenge Fantasy is almost always told from the point of view of the one exacting revenge. When the moment of revenge comes, readers or viewers experience the same cathartic rush as they would while reading a well-crafted Comeuppance Fantasy, but they do so through the eyes of the protagonist. In the latter form, traditionally, the reader experiences the whole sad affair through the eyes of the monster being vanquished.

As a reader, I’ve experienced the much-deserved demise of countless such fictional Naughty Listers. Everyone who is anyone in the horror field has, along with everyone else, tried their hand at this form, and it’s given us some winners (Robert Bloch’s “The Living Dead” immediately comes to mind), but one only needs to read three or four of these in an anthology before comeuppance fatigue sets in.

As a writer, well . . . my first ever short story submission/rejection was to Cemetery Dance, way back in ’94, and told the tale of a Catholic priest taking confession from a whiny Goth who turns out to be the Angel of Death, who is all sad-faced over the lives he’s taken since the dawn of time. Yes, I was reading a lot of Anne Rice at the time, and yes, the priest was also a pedophile. Of course he was! Death came by to take the soul of an elderly woman praying in the pews and then he smelled the pedophile and, y’know . . . bad stuff happens to the priest (who, you might have guessed, was abused as a child). It was a wretched affair, and it deserved rejection.

As an editor and a publisher, I’ve form-rejected more of these comeuppance fantasies than I care to remember. Between myself and John Joseph Adams, the number of such rejected stories becomes unknowable, like the churning face of some strange Old One. For new writers, the temptation to write about a child-killing pedophile with an irrational fear of scorpions can be great, and even the unseasoned reader will know by the second page that the pervy creep is getting stung to death by scorpions on the last page—most likely while the tiny ghosts of his victims look on and play hopscotch or something.

Now, it’s not my place to editorialize, so I’ll keep this sho—

Huh. Sounded like someone at the door. It’s windy and there’s thunder in the distance and I don’t see anyone through the peephole, so where was I?

Oh, yeah: the point is, every writer who ventures into the dark waters of horror fiction has written his or her share of these one-note comeuppance stories, and I’m not even remotely exaggerating when I say that TOO DAMNED MANY OF THEM are about bad priests or bad authority figures in general. Regardless, they’re shallow, and unless you’re going to turn them on their head entirely, then they’re best left unwritten or, at the very least, at the bottom of your drawer/lost somewhere in that folder filled with aborted writing projects.

Examples of how to do these things correctly? Well, there’s actually a perfectly fine example in the pages of the debut issue of Nightmare Magazine. Laird Barron’s “Frontier Death Song” reveals itself in its final passages to be a Comeuppance Fantasy, but you do not see it coming. Joe Hill’s debut novel, Heart-Shaped Box, is an exciting example: Jude Coyne was supposed to be killed by the Haunted Suit. He didn’t want to die, and he fought back, and what was intended, at most, to be a novella became a novel. The tale outgrew the confines of the simple Comeuppance Fantasy. Also—Sid’s tale from Toy Story. Pluck it from the movie and tell it from Sid’s POV, and you’ve got yourself something that could easily have been written by Richard Matheson or Ray Bradbury.

Now, my grip is a little slippery on one facet of the Commeuppance Fantasy, and I’m hoping you can help me to trace the roots of this ubiquitous horror trope. I’ve already postulated that Scrooge is the progenitor of the character type we find in just about every traditional comeuppance narrative, but I’m not sure at what point it morphed from an occasional form in pulp and genre writing into a raging demon that that clutters anthologies and slush piles alike.

Okay, so we’ve got A Christmas Carol (1843) and we’ve got EC comics and Tales from the Crypt (1950-1955), but what happened in the ninety-three years between the two? If cinema is any indicator, the EC-style comeuppance was not yet in effect, if something like King Kong (1933) is any indicator.

Though not explicitly part of the Hays Code, in the thirties it was nevertheless mandatory that the monster always die at the end of its movie, regardless of whether or not the audience had sympathy for him/her/it. This is evident throughout the early Universal monster movies and even in something like Son of Kong, in which said monster is virtually harmless and childlike. The same goes for King Kong, of course, but the Eighth Wonder of the World is not the monster of his movie.

Carl Denham is. Think about it: he’s a megalomaniac who gets untold numbers of innocent people killed, both abroad and in the Big Apple. He systematically kills every single unique living specimen that he encounters on Skull Island, culminating with the death of the great ape himself, and he recklessly causes millions of dollars in property damage. He doesn’t even get a slap on the wrist and he gets to wrap up the flick not by getting his ass STOMPED but by cracking a one-liner. No, asshole, it wasn’t beauty who killed the beast—it was you.

So, sometime between ’33 and ’50, a shift took place. In a post-EC world, Denham would have died, and deservedly so, for the chaos and bloodshed his hubris caused. Probably would have gotten stepped on by the big guy just like his counterpart Fred Wilson (Charles Grodin) in the 1976 remake of King Kong from producer extraordinaire Dino De Laurentiis. For that matter, 1931’s Victor Frankenstein (played by Colin Clive) would have gotten his just desserts in the modern era as well, instead of escaping with Elizabeth while Karloff pulls the Self Destruct Lever, killing everyone but the jackass responsible.

So, in the interest of generating discussion, my question to you, dear reader: Did EC turn the tide? Did what we think of as the traditional comeuppance narrative have its origins in the pages of Tales from the Crypt, The Haunt of Fear, and The Vault of Horror, or was it born in the pages of the pulps that preceded it, where such talents as Robert Bloch, Richard Matheson, and Ray Bradbury were—

That noise again. The doorframe creaking and splintering against the weight of . . .

. . . all of those lousy comeuppance stories that I rejected or made fun of over the years. Sliding under the door, their crisp edges eager to open flesh and taste blood.

One page at a time. 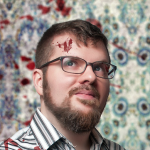