I read my first real horror story when I was in elementary school. I don’t remember what grade I was in, but I ordered an anthology with a title like Chilling Tales or Scary Stories from one of those little book catalogues they used to hand out to students once or twice a year. It was like Christmas for me: perusing this list of hundreds of titles and checking the boxes of the six or seven I would be allowed to order. Spooky books were always at the top of my list. Most of the contents of this particular one are lost to me. Well, they all are, except one. Almost assuredly it was stocked with the toothless fare some editor deemed safe for middle- to lower-grade kids: condensed retellings of “The Legend of Sleepy Hollow,” maybe, or the haunted lantern-bearer in Charles Dickens’ “The Signal-Man.” Things that gave my little heart a pleasant shiver, and worked to sow the seeds which would dictate the color of my life many years down the line.

But there was one story that disturbed me in the more complicated way I would only later come to realize as a hallmark of the true genius of horror fiction. While the other stories left me with a kind of moonlit Halloween glow, this one put a spade into my settled earth and overturned it. I felt weirdly sick after reading it. I felt injured in some obscure way, as though it had betrayed a trust.

True to its purpose, the story gave me the chilly thrill I wanted and expected of it, but it did something more than that, too—something deeper. It introduced a terrible sadness into the mix, a human bereavement that put a very nasty edge on the story’s ghoulish element. Unlike the headless horseman or the unlucky signal-man, the weight of this story achieves its terrible velocity from the grief of a family which has lost its son to a war. The wish which summons the monster on the other side of the door is borne of a love misshapen by despair and longing; and the wish which sends it away again, which banishes their own son to the grave, is also borne of love.

I was too young to appreciate the story’s perfect beauty. What I knew was that it complicated the spooky joy of reading about something returning from the dead and knocking on a door with a feeling of terrible loss. I didn’t think I liked the story—it didn’t even let me see the monster!—but I couldn’t stop thinking about it. It made me uncomfortable and sad, uneasy in my own skin.

Like I said: it was my first real horror story. I’ve been reaping its harvest ever since.

Horror fiction is currently enjoying its latest renaissance. It seems to cycle into and out of popularity, and its current state of grace is due in large part to a crop of highly literate, artistically serious writers who treat the writing of it as something akin to a spiritual calling. That some of them, like Laird Barron and Conrad Williams, are legitimate prose stylists, gives the new work some genuine literary clout.

My only misgiving about the newest wave is the predominance of what is known as “cosmic horror.” To forestall the inevitable chorus of dissent, let me be clear that I’m speaking in the broadest terms here. There are scores of exceptions. I just find this to be the predominant theme. Cosmic horror, in the vein of Lovecraft and Chambers, is the focus on the hostility of the universe to the concerns, or even the continued survival, of mankind. It’s a rich and generous vein, and much great work has come from it. Its concerns are philosophical. The epiphanies of its protagonists are spiritual.

This is entirely appropriate for horror fiction. Horror, like crime fiction (which is its close cousin), is perfectly evolved to interrogate our moral and theological assumptions. It’s an antagonistic literature, and therefore a fundamentally necessary literature. That it should undermine our sense of spiritual smugness, especially in this age of ideological rigidity, is both healthy and needed.

My misgiving is entirely personal: it feels too distant in its intent to unsettle me the way I want horror to unsettle me. The unease is intellectual in nature. It doesn’t trouble my heart the way “The Monkey’s Paw” continues to do.

And like any true masochist, I’m always chasing the original pain.

The worst sound I know is the sound of somebody crying in another room. It sounds like dissolution to me. It sounds like entropy, the slide of life into meaningless ruin. It’s the sound of termites in the walls. It’s also the most intimate of sounds. When you’re a child, and you hear your parent weeping behind a closed door, you get your first taste of real fear. By the time you hear your child doing the same thing, you’ve already been well seasoned by fear, and what you feel is the knowledge of all the unavoidable pain that’s waiting for her, of all the things you cannot protect her from. You fear what you know is coming.

As a reader and as a writer, this is what really affects me. The horror that comes from within the family—we can call it domestic horror for the sake of this essay—is far more personal and therefore more immediate than anything that swims toward us from another star. It’s one of the reasons the vampire and the zombie are such powerful cultural touchstones: the monsters wear the faces of our loved ones. We can see in these monsters symbols of lovers who have turned against us for reasons we can’t fathom, of family members whose personalities are subsumed by mental illness, so that we find ourselves sharing a home or a bed with a personality we no longer recognize.

The Exorcist, by William Peter Blatty, is one of the most frightening horror stories of my lifetime. Despite the fact that the entity threatening Regan MacNeil and her mother fits very comfortably under the rubric of cosmic horror, the actual horror of the story comes from the terrifying transformation of a little girl into a desecrated vessel, and a home for the Devil. The mother watches her daughter transform into a living blasphemy. The story is profoundly harrowing, and when it’s over, it’s not Pazuzu that we remember. It’s the filth that the creature has made of our domestic dream.

The Exorcist, and other stories in the vein of domestic horror, are effective because they are personal. They hurt.

Like “The Monkey’s Paw,” these are the stories that linger. 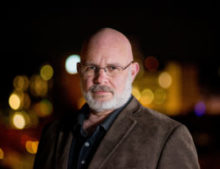 Nathan Ballingrud is the author of North American Lake Monsters and Wounds: Six Stories from the Border of Hell. He’s twice won the Shirley Jackson Award, and has been shortlisted for the World Fantasy, British Fantasy, and Bram Stoker Awards. His stories have appeared in numerous Best of the Year anthologies. Wounds, a film based on his novella “The Visible Filth,” will be released in 2019. North American Lake Monsters is in development as an anthology series at Hulu.