Almost every semester, I teach a Horror Literature course for undergrad students. We read some classic horror by Shelley, Poe, and Hawthorne, but we also read some more current literature: Shirley Jackson, Stephen King, Victor LaValle. It’s by far the class I most enjoy teaching. And, if my students are to be believed, it’s one of their favorite classes, too (getting the chance to read horror leads to these positive reviews as much as anything I do in class). I’ve long found it amusing how students end up loving a class with the word “horror” in the title. About a year ago, I started bringing this into the course itself.

During our first class of the semester, I bring up this very topic: why would you sign up for a class with the word horror in its title? The question often elicits laughs, the students assuming I’m just making a crack, but I push past the laughs, reiterating my inquiry. Why would you sign up for a class where we only read works designed to instill scares? They start to think, realizing how it does sound odd to be attracted to the horror genre.

About a decade ago, my friend drove me through what remains of Pilgrim State Hospital, an area filled with derelict structures that look as inviting as prisons. One structure, a cylindrical brick building, stands in an otherwise empty field, like a watchful creature waiting to pounce. The structures fascinated me as much as they intimidated me. As someone with mental illness, my relationship with the landscape was an odd one. It is not inconceivable that in a time before antidepressants I could have ended up in those buildings back when they operated. Yet, something about the place spoke to me, like there were voices here I could relate to. There was an eeriness to the location, but a comfort, too, a reminder that those of us whose minds operate differently are not alone.

I have long found comfort in horror and the surreal, especially when my mental health takes a turn for the worse. On my thirtieth birthday last year, I watched Mulholland Drive, a film about a woman’s sense of reality breaking. I cannot imagine a better way to celebrate the start of my third decade. I don’t need drinks or fancy meals; existential horror serves me more than enough.

This fascination with horror is ironic. Certainly, no one would have guessed it if they knew me as a small child, since I suffered from near crippling anxiety. I screamed in terror when I was marched off to preschool, begging my mother not to make me go to this strange place. In grade school, I despised the idea of having to socialize with my fellow students and worry how to interact instead of being allowed to play on my own. As I entered middle school, the chemistry in my brain continued to act up, leading my mind to come up with an anxious thought that would then lodge inside of me, reminding me of it whenever events quieted. Here’s a gross image you won’t forget. Here’s a way you might die. Here’s why your life might fall apart. Imagine if this happens, imagine if that happens.

Be afraid. Be always afraid.

Eventually, a whole bunch of diagnoses landed in my lap: social anxiety, OCD, dysthymic depression, high-functioning autism. Through them all, though, my love for the weird, for the surreal, and especially for the horror grew and grew. Baffling, surely. Why, if I already suffered from mental health issues that caused anxiety and depression, would I want to consume media designed to scare and terrorize me in my spare time? Why don’t I just binge watch Friends? Why don’t I crack open the latest YA fantasy series and disappear into a fun world? Why don’t I just listen to The Beatles all day?

No doubt there are some that feel soothed by doing just that. I’m not one of them. Horror touches me, because it acknowledges my existence, my sense of how the world works, certainly in my darker moments. Perhaps nothing better captures this than the circumstances when I first watched The Shining.

Toward the end of my very unpleasant time in high school, when I struggled the most with mental illness, I stayed home from school “sick” for two days in March. March, as any student can tell you, is the worst month of school. February’s break is a fading dream, and April’s spring break seems eons away. During those two days, I read Stephen King’s The Shining and then watched Kubrick’s adaptation. I enjoyed both, but the Kubrick film made an impact on me that left a deep, possibly life-changing, impression. Prior to watching that film, I don’t think I’d ever been so scared while viewing a movie before. It was glorious. It also made me understand why horror was my genre.

As someone who felt trapped in a place that he despised, I responded to Jack and Wendy Torrance’s time in the Overlook, feeling like the emotions I saw on screen were outsized versions of my own. Instead of being repulsed by this and dashing for the remote, I felt acknowledged. The makers of the film had an insight into psychological issues that made me feel less alone. In those years, I knew of no one going through what I felt, but at least this piece of art let me know someone else in the world understands how my brain works.

Years have passed since then, but it is in horror that I still feel most welcome, and it is horror that I turn to when I’m feeling ill. My bookshelves are filled with strange and terrifying stories, I write horror myself, and I’ve devoted more hours to watching scary movies than any other genre. Even the bleakest of times do not cause me to turn from my beloved genre. In fact, such times make me embrace it more. A year ago, while going through a very difficult medication change, I watched my old standby, The Shining, for the sixth time. It provided a comfort that I found hard to come by during that difficult stretch.

Recent events have only reaffirmed how medicinal the genre can be for me. While I write this, the world, and especially my country, suffers through the coronavirus pandemic. Here in New York, I spent the spring locked inside, hearing about a rising death toll on the news. Now, as I write this first draft, it’s early autumn. The coronavirus has quieted in New York, but the rest of the country is reeling as it cuts a line straight through. Now, more than ever, I am told, is the time for escapism.

Still, I’m drawn to the darkness. In the spring, I set up a marathon of the scariest episodes of The X-Files. I watched Carnival of Souls, a horror classic I’d been meaning to see. I caught up on the comic book series Something is Killing the Children. I read one of the only Shirley Jackson novels I hadn’t gotten to yet, We Have Always Lived in the Castle. Like so many others, my mental health has swung wildly during the pandemic. As in the past, I look to horror to find validity and companionship for my feelings. The works of David Lynch, the words of Shirley Jackson, and the art of H.R. Giger remind me that the horrors my mind sometimes inflicts on me are shared by others, too, and, through art, we can explore them instead of pushing them aside.

My Horror Literature students have many answers to my first class question. It always leads to a lively discussion, a great way to break the ice and form a sense of camaraderie. The most common answer I hear from students is that horror allows them to have adrenaline rushes in a way that’s safe, like a roller coaster. This, I surmise, must be why jump scares have become an integral part of horror filmmaking. It’s telling, then, that I’ve always disliked jump scares, that I prefer the scares to come from the atmosphere, from the world a piece of horror places me in, be it the derelict spacecraft in Alien or the vampire-filled steamboats of Fevre Dream or my old friend the Overlook.

Inevitably, a student will ask me why I like horror. Students love to throw my questions back at me, maybe picking up that I am at my best when there is a class discussion. Or they just want me to talk for longer so I assign less work. Either way, I always answer the same way. I don’t give them a long backstory, I don’t even give them an anecdote. I just tell them that of all the types of storytelling, it’s horror that seems most interesting in telling me the truth, and in that truth, I find comfort. 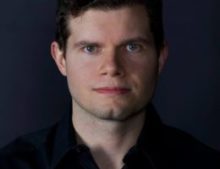 Donald McCarthy is a writer and teacher from New York. He’s had essays appear with Salon, The Huffington Post, Paste Magazine, and more. His fiction has appeared in The Grey Rooms Podcast, Raconteur Literary Magazine, The Manhattanville Review, New Myths Magazine, and a host of other places. His website is donaldmccarthy.com.