The H Word: An Empathy of Fear

“I think I’m going to faint,” I whispered.

My best friend nodded sympathetically, his face radiating concern. “Try not to knock over the popcorn,” he whispered back.

We were in a movie theatre, back when one could visit such outlandish things, and the first Saw was playing. I was more terrified than my normal baseline of “extremely” and a loss of consciousness seemed not only likely, but imminent. Afterwards I complained about it for months, just as I had since we were kids. “I don’t like horror,” I repeated. “It’s too horror-y.”

Similarly, last fall, I returned from my overseas trip raring to go again (also raring to write it off on my taxes again), and to this end, my editor recommended some spring events, including StokerCon, a horror convention.

But I’m not a . . . I began to type. Horror reader? Nope. Horror critic? Nope. Horror author? Definitely not. I am a shaking, weeping wreck at the mere thought of, I corrected myself . . . and stopped again.

Well, hang on. I’d started seeing my debut novel, Beneath the Rising, on “2020 Horror” lists at about the same frequency as science fiction and fantasy. Had I written a horror novel without noticing? Or intending to?

That was a cardinal sin, I thought. I’m always telling people, particularly people who didn’t ask me, “Whatever genre you write, you should consume as much as possible.” New, historical, banned, worldwide, every media, every creator. That way, you knew the tropes and whether you wanted your work to mess with them, and you knew readers’ expectations regarding them. And I didn’t know those things.

Okay, did I mention that I’m already all topped-up with fear at all times no matter what I’m doing? No? I have nightmares after watching so much as horror movie gifs. Even the “silly” movies, even the “jokey” ones, even ones that friends promise me aren’t scary. Sometimes horror books are tolerable. (I loved T. Kingfisher’s The Twisted Ones, but yes, nightmares were had.)

How did a horror book accidentally emerge from the brain of someone who is always brimming with fear? Someone who once threw a paperback of The Day of the Triffids across the room because it had managed to jump-scare me?

I have a theory about it now: about instinct and intent, about emotion and fiction. My reactions prevent me from accessing the horrorsphere; even though nothing’s real, I get overwhelmed. Is that the goal of horror-as-a-genre, rather than things that are merely “scary”? Is that the intent of its creator? If that was the metric, my book didn’t qualify. I wanted the characters to feel fear when they’re confronted by scary things. But I didn’t want readers to feel it.

Quite right. The reason we read fiction is because we empathize with the characters’ experiences and resulting emotions. As we accompany them on their narrative journey, the shared emotions are what bond us. So, it shouldn’t matter if the author intends for something to be scary for “them” and not for “us.”

But as a result of that, what does it mean to be a self-admitted coward who can’t handle or process fear, and also be someone who is writing books that people call horror? Are those people wrong? Am I wrong? Is it bad horror if you do it by accident?

Aha, I thought. There it is. Maybe it’s not by accident. Fear is not only our strongest but our most primal emotion, primal in the sense of not merely first in importance but first in time; it evolved so early that it transcends reason, experience, self-discipline, logic. Early single-celled organisms knew fear, and evolved chemosensors and photosensors to figure out where the scary things were so escape was possible. This was the first thing we feared, with no more than the receptors on our cell membranes: something coming at us.

Then the whole host of strategies to keep the fear at bay: moths bearing false owl eyes, imitating something a bird should fear; birds themselves puffing up to frighten things off; the pupils of grazing animals shaped to scan the horizon for predators hidden in the grass; small creatures huddling in flocks or schools in the hopes that the falcon or shark can’t single out one individual for lunch; the shimmering wings of massed bees; even the horns and skulls of animals that have to fight their own kind, fearful they won’t be allowed to mate that season. In school, we were taught that animals employ the same behaviours to deal with fear as people do (fight, flight, freeze, appease) . . . whether that fear is real or an illusion.

Fear guides more of our behaviour than we can be consciously aware of; and while we are empathizing with characters and feeling their fear, our bodies think it’s real. At some level, both writers and readers know it’s the emotion that cannot be ignored. So now I think the truth is that every book, deliberately or not, is about fear. Its central conflict is always about fear. That’s how it’s possible to write a horror book by accident. Even in genres we don’t think intend to scare us, we feel genuine fear for illusory people. A romance book might be about someone’s fear of commitment; a science fiction book about someone’s fear of a future in which they are superfluous.

So Stephen King, who knows he’s writing a horror book, says to the reader “I mean to frighten you with vampires” and writes Salem’s Lot; but Toni Morrison, who isn’t, says “Isn’t the brutality of your fellow humans scary, too?” and writes Beloved. (A book that caused me to sleep with the lights on for a month.)

Well, now what? I ask myself, and it feels more relevant than ever, in this world full of interesting new dangers. What does searching for the fear in every conflict mean for my next books: for their genres, for their intent, for their characters, for their readers? Is it possible to employ my own fear and process it into fiction, to put its strength into a harness? I hope so. I hope I can thoughtfully and deliberately say: I’m afraid. Are you afraid too? 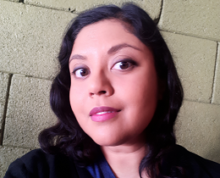 Premee Mohamed is an Indo-Caribbean scientist and speculative fiction author based in Edmonton, Alberta. Her short fiction has appeared in a variety of venues, including Analog, Escape Pod, Augur, and Nightmare Magazine. Her debut novel, Beneath the Rising, is out now from Solaris Books, with the sequel due out in 2021. She can be found on Twitter at @premeesaurus and on her website at premeemohamed.com.