The H Word: A Celebration of Sonic Horror

Horror fans often talk about disturbing books and movies, but music rarely enters this conversation. It’s a shame, given how some of my most terrifying experiences have come from a flimsy CD. Heavy metal, more than any other genre, scares me the most.

Catchy horror tributes like “Hammer-Smashed Face,” “The Family Ghost,” and “Cthulhu Dawn” are guaranteed to get me headbanging. But these songs don’t scare me. That’s no mark against them. In fact, I think these songs aim to energize their audience rather than unnerve them. However, my favorite metal bands have always been those that intentionally seek to terrify. It’s worth recognizing their brilliance and examining how exactly they create sonic horror.

I still remember the first metal band that haunted me: doomy cult phenomenon Khanate. Vocalist Alan Dubin is the root of their terror. His performance so fully embodies agony and insanity that it’s easy to believe he’s channeling personal experience. Take for instance these lines from the song “Wings from Spine” (bit.ly/3dAsWOZ): “When clean hands go foul / Angels are easily broken / And I broke one / I broke one because I could.” Dubin’s throat-shredding shrieks feel like the confession of someone intimately familiar with evil—someone who, in a better world, might have escaped this downward spiral. His screams drip with misanthropy and hopelessness. The fact that this performance feels a little too convincing—blurring the line between fiction and reality—frightens me. This man cannot be saved, and neither can the society that raised him.

When I met Dubin a few years back at Austin Terror Fest, he was a friendly guy, but I’d be lying if I said I wasn’t scared to approach him. I waited outside the merch booth for ten minutes, mustering the courage to tell him how much his music meant to me. The message came out awkward, but Dubin thanked me in a soft voice and smiled—smiled! I was so happy I got to pay my respects to the man who sparked my love for sonic horror.

Doom metal band Bloody Panda further deepened this love. Like Khanate, much of Bloody Panda’s terror comes from the vocal performance. Vocalist Yoshiko Ohara matches Dubin’s talent for tormented shrieks, but she is equally adept at funereal drones. Her versatility makes for a horror experience that is quietly eerie one moment and viscerally upsetting the next. The band’s cryptic lyrics add to this dread. In the song “Fever” (bit.ly/3DLkaIw), Ohara delivers this omen: “Red eyes and blue eyes are watching you / Nowhere to go in your past life.” These lines always make me shudder, hinting at a hidden threat both incomprehensible and inescapable, bordering on cosmic. Beyond their vocals and lyrics, the band pushes the limits of sonic horror with Blake McDowell’s organ compositions. While the guitar, bass, and drums pummel the listener, McDowell’s droning organ suffocates them, transforming a scary musical experience into a breathlessly terrifying one.

Few bands match Bloody Panda’s mastery of atmospheric horror, but French black metal group Blut Aus Nord is among them. While Bloody Panda builds toward terror gradually, Blut Aus Nord dives into it headfirst. Their drum machines are fast, ferocious, and overwhelming. They achieve the same suffocating effect as Bloody Panda’s organs through different means: a wall of sound that relentlessly concusses listeners, leaving little room for one to think beyond the noise. The guitarwork breeds another layer of fear with its deliberately alien-sounding tone. Both spacey and dissonant, it feels like a transmission from the farthest reaches of space—perhaps a message from the elder gods. The band further leans into this cosmic horror with lyrics about Lovecraftian beings (e.g., their song “Chants of the Deep Ones”—bit.ly/3C3T9Pw), the transcendence of physical form, and the collapse of reason in a strange, indifferent universe.

My efforts to make sense of their lyrics often fail due to their embrace of the esoteric and frequent use of Latin texts. By disorienting listeners both musically and lyrically, the band creates an experience of sonic horror that destabilizes reality itself. When understanding the world becomes impossible, terror reigns supreme.

Like Blut Aus Nord, UK black metal act The Axis of Perdition uses blistering drum machines and chaotic, dissonant guitars to frightening effect. However, the band’s primary technique of terror differs substantially from their French counterparts’. Taking inspiration from urban decay and the Silent Hill video games, their music incorporates not only traditional heavy metal instruments but also sampled industrial sounds: screeching elevators, grinding machinery, and harsh radio static. The result is a cinematic collage that is fully immersive in its horror, birthing fully formed scenes in the listener’s mind. For instance, while listening to the song “Deleted Scenes Part 1: In the Hallway of Crawling Filth” (bit.ly/3R6exrF), I’m transported to an abandoned factory that is rusted, cavernous, and infested with vermin. The scene sticks with me long after I open my eyes, my skin still crawling with the itch of roaches—or something worse. In this sense, the band bridges the gap between sonic and cinematic horror—though the cinematic elements remain wholly in the listener’s cursed imagination.

Without question, Khanate, Bloody Panda, Blut Aus Nord, and The Axis of Perdition deserve the horror community’s love. While they all use dissonant riffs, chaotic soundscapes, and monstrous screams to create sonic horror, each band also has a unique approach to the artform. We should admire the artistry behind their terrifying songs the same way we admire a nightmare-inducing novel or movie. After all, these musicians construct experiences of horror with just as much thoughtfulness, nuance, and mastery as a writer or film director.

So the next time you want to be scared, turn off the lights and put on your headphones. A world of sonic horror awaits. 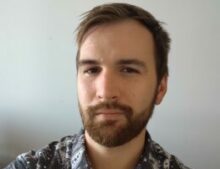 Eric Raglin (he/him) is a Nebraskan speculative fiction writer and the owner of Cursed Morsels Press. His debut short story collection is Nightmare Yearnings, and his second collection, Extinction Hymns, is out December 2022. He is the editor of Shredded: A Sports And Fitness Body Horror Anthology and Antifa Splatterpunk. Find him at ericraglin.com or on Twitter @ericraglin1992.