You know, this column has settled into a kind of rhythm recently. I have been known to devote the entire piece to one book or one movie, two books or two movies, or mixtures thereof: but of late I have gravitated to one book and one movie, a mixture that is more or less appropriate even if it also leaves me feeling apologetic toward those publishers who have left my shelves groaning with works that surely deserved some coverage here. (Movies, I feel, even as a guy whose mania for the art approaches laser focus, can largely carry their own water.) But it ain’t going to change this time, as we once again have one book, and one movie, fortuitously linked by the commonality of predatory smiles. 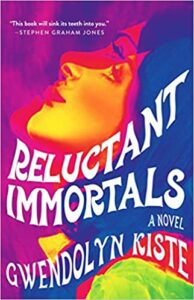 Reluctant Immortals by Gwendolyn Kiste is a literary mash-up, one that accomplishes the not-exactly easy feat of rendering Dracula interesting for the first time in, if not years, then at least since the last time I looked.

I am not dissing Bram Stoker, or vampire fiction in general; honestly, Stoker is great, and it hasn’t been all that long since somebody gave me a vampire worthy of appreciation. I specifically single out Dracula, who has in many cases been a collection of familiar tics trotted out and paraded on a series of stages already blood-flecked with iterations from the past. Dracula, himself, is not fresh, an appropriate condition for a walking corpse.

But what do you know? This novel gives Dracula a microwave zap and, boom, he’s interesting again.

It accomplishes this by taking us back to 1967 and providing us with two reclusive women, both way older than they look: the vampiric Lucy Westenra, the girl who went down to the Count in the original novel, and who, unlike her friend Mina, did not get to be re-imagined as an adventurer among the leagues of Extraordinary Gentlemen. She is here a vampire living in seclusion with her sole companion, a woman, not a vampire, who is nevertheless ageless from a curse of her own: Bertha Mason, who that cad Rochester locked in an attic in the pages of Jane Eyre. They live in a house that has no choice but to decay with them as inhabitants, as they have for decades, an empty existence punctuated by their one effective entertainment, a local drive-in movie theatre; and by their shared fear, that the horrid men who did this to them will return to dominate them anew.

Lucy in particular has not escaped her abuser at all. She keeps his ashes in a collection of urns, carefully kept separate and occasionally buried. This does not mean that she is safe from him. The ashes are unquiet, and preventing them from reforming is a full-time job, one that guarantees this immortal undead existence of hers is an exercise in always reliving the nightmares of the past. Bertha, for her part, fears that Rochester will return as well, and so things get intolerably more complicated when the similarly immortal figures of Renfield and Jane Eyre show up, portending a final battle between literary icons that soon moves to the era’s Haight-Ashbury, a location where there are any number of hopeful but lost young women looking for gurus and spiritual leaders.

The first thing you need to know is that once it starts, the book moves like a rocket, dancing from cliffhanger to cliffhanger at the rate of once every few pages, down to an apocalyptic showdown in a most appropriate place. The second thing you need to know is that it also never forgets what it’s about. Both Lucy and Bertha are abused women who have been left with permanent trauma by thoroughly rotten men, and this has left them emotional fugitives who have internalized their hurt and are damned to a life of hiding from it, forever. Granted that the necessity to provide a plot prevents this from being a permanent status quo, it is nevertheless the way that they have existed for decades, the lens that affects their every interaction with the outside world in general and other men in specific. When the action moves to the Haight it is a profound way of bringing in, if not in literal presence, then certainly in thematic flavor, the exploitative figures who haunted the counterculture at the time. Rochester is certainly not Charles Manson. But as painted here he certainly exists in the same emotional neighborhood, surrounded by young women who are willing to give him what he wants without realizing that it’s too much, a bargain also enjoyed by the Count.

And something else: this book is pretty goddamned funny, too. 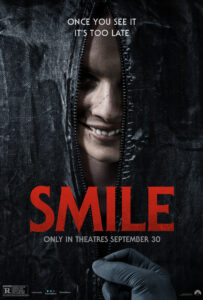 The debut feature of director Parker Finn, Smile (2022; seen theatrically) presents us with a predatory entity, deliberately never explained, who leaps victim to victim, driving each to suicide in a matter of days. The protagonist is Dr. Rose Cotter (Sosie Bacon), a psychiatric specialist who witnesses the monster’s last victim slicing her throat from ear to ear and therefore becomes the next target, inexorably being driven to madness by the many chilling manifestations of the creature in the form of people wearing horrifically cruel smiles.

The movie happens to embody one of my horror pet peeves, the protagonist beset by a menace capable of ordering reality as it goes along, and virtually impossible to fight, that toys with her like a cat torturing a terrified mouse until the film achieves its slotted runtime and it’s time for her to get eaten. Personally, I don’t mind the protagonists losing. I just hate futility.

But on the plus side, there is Sosie Bacon’s terrific and nuanced performance and another factor that should be recognized more in the overall praise for this film: the superb sound mixing. Honestly, this is a film that is out to scare the shit out of you, with ambient noises and deep thrumming music that you may not always hear but you will always feel. Newcomer Parker Finn knows exactly what he is doing, and this is the shakedown cruise that will be cited when he comes up with something inevitably better on his next go-round. Damned impressive, this. Emphasis on damned.