On the Destruction of Horror: Notes from Your Queer Editors 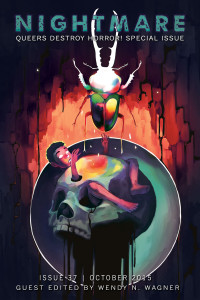 This special issue is also available in trade paperback!

Welcome to issue thirty-seven of Nightmare. It’s our second installment of the Destroy All Genres project (see Destroysf.com for more information), Queers Destroy Horror!, a double-issue of Nightmare that’s entirely written, edited, and illustrated by LGBTQUIA creators. It’s been an honor and a privilege to work with this remarkable team.

The first horror story I ever read was Stephen King’s “The Raft,” a terrifying little gem that appeared in the collection Skeleton Crew, a book whose cover instilled in me a sense of disquiet that was only enhanced by the horrible things it contained. I was seven or eight years old, but everything about that book made sense to me. Anything in the world could be dangerous, even toys and dolls and harmless-seeming animals, like the monkey on the cover of that book. I huddled under my blankets and read my books and imagined how I could possibly survive the dangers of the world.

Now as an adult, I turn to horror stories not to train myself to survive the world but to make sense of it. The world is horrible sometimes. Terrible things happen for no explicable reason, and the rules that run society can be unfair and cruel and horrid. But horror stories reframe the terrible things of the world. They hold a mirror up to the revolting so we can put it into some kind of taxonomy. They place wickedness and evil in a context that helps us see their limits and comforts us with the notion that darkness can be labeled, lit, and even survived. The work of the horror story is to define and demarcate the uncanny and the dark.

But to be queer and to love horror stories is not always easy. Those stories are spun out of our culture and our societal norms, and the labels and definitions that come out of horror stories aren’t always inclusive or healthy. How many slasher flicks depend on rules about “appropriate” female sexuality? Enough that in Scream, the first rule for surviving a horror movie is to never have sex. How many thrillers about psychos rely on the idea of a gender-confused sadist to power their stories to success? Just ask Thomas Harris and Robert Bloch, plus all the writers who’ve ripped them off over the years.

Be normal!, the tropes tell us. Be straight! Follow the rules! The top-level lessons of horror stories can feel stifling with their emphasis on the WASPy, heteronormative society that came to its zenith in 1950s Americana.

But for all those stories that tell us to stop asking questions, stop trying to figure out our own unique relationships to our bodies and our sexualities, there are dozens of other stories that whisper—or even shout—that the way to beat back the darkness and the danger is to be more yourself, to break more soul-squashing rules, to be as queer as you need to be. The heroes of horror stories are often the oddballs and the weirdos, like the kids in The Monster Squad or every character in a Shirley Jackson novel.

This special issue is about celebrating queer work, about breaking rules, and tweaking tropes. It follows in the footsteps of terrific anthologies like Bending the Landscape: Horror (edited by Nicola Griffith and Stephen Pagel), Queer Fear I and II (edited by Michael Rowe), and Night Shadows: Queer Horror (edited by Greg Herren and J.M. Redmann). Do readers really need another all-queer horror collection? My experience editing the personal essays for Lightspeed’s Queers Destroy Science Fiction! special edition certainly says they do. In that project, writer after writer spoke on the painful lack of QUILTBAG representation in popular culture, and how much they wanted to see more stories by queer creators and about queer characters. As Jerome Stueart put it: “When we’re not there, we’re not here.”

So here’s a collection that puts more of us out there, with terrific essays and nonfiction exploring the role of queers in horror, stunning poems by LGBTQUIA voices, and eight works of short fiction that are dark, timely, and just plain eerie. I hope you will enjoy reading this issue as much as I have enjoyed bringing it together.

I’d like to give special thanks to Ellen Datlow, Ross Lockhart, and Steve Berman for all their assistance with the project. And of course I owe a tremendous debt of gratitude to John Joseph Adams, who is not only the most supportive and encouraging publisher any editor could ever hope to work with, but also the best mentor and friend. Everything I know about this work, I have learned from him.

As queer writers and readers, we find ourselves feeling both at home and deeply unwelcome in the horror genre. Sexual and gender nonconformity are in the genre’s DNA; queer people began writing horror long before it was a recognizable fiction category, and our ranks include some of the biggest names in the contemporary horror scene. There’s also something thoroughly queer about the themes that preoccupy the genre, the thrilling or threatening friction between outsiders and communities, attraction and revulsion, sex and violence, power and vulnerability. As people who fall on the ever-expanding spectrum of lesbian, gay, bisexual, asexual, trans, intersex, and nonbinary identities, we think about desire, embodiment, and belonging in ways that are rarely simple and never unexamined. It makes sense that many of us are drawn to fiction that tackles these topics in unexpected and often unsettling ways.

But, as the essays and interviews in this special issue demonstrate, if we often see ourselves reflected in horror stories, it can also feel like the genre wants us gone—or dead. Horror’s queer figures include both monsters and victims: the demonically desirable predator and gender nonconforming serial killer, but also the solitary hitchhiker, the disposable gay or lesbian friend, the young woman who has sex in the wrong way or with the wrong people and is punished with death and dismemberment. Queer writers navigate pockets of homophobia or well-meaning ignorance, where our characters’ queerness is seen as either a moral failing or an act of exceptional bravery in-and-of itself. Equally frustrating are the readers who dismiss queerness in fiction as an “unnecessary” complication that isn’t “integral to the plot.” If on the one hand, a certain brand of mainstream horror cannot envision anything but monstrosity or victimhood for queer people, there is also a brand of horror criticism that resents the presence of queerness in the first place, viewing it as an intrusion of faddish political rhetoric into horror’s proper sphere.

Of course, there are many possible responses to those who claim that there is no place for queer people, queer relationships, and queer sexuality in horror. We can point to the genre’s history. We can insist that representation is a moral issue. Personally, I find myself thinking that the readers who place queerness outside of horror’s boundaries are demanding a poorer and duller version of what this genre can be. At its best, queer horror acknowledges the way our vulnerability is shaped by what we desire and how our bodies are recognized. It asks us to dwell in the messy consequences of exclusion and isolation, of family-making and community-building, of finding names for ourselves or coming to recognize that no name fits quite right. It gives us characters with uniquely vexed or uniquely rich connections to their genders, people for whom the body is more than a sack of viscera waiting to be splattered across the walls.

When we say that we belong here, we are insisting above all that this genre can be rich and vibrant—that horror tackles important questions, that it is meaningful to the way we live our lives. Whatever it is that draws you to horror fiction, I hope that these pages remind you why the genre’s queerness is something to celebrate.

I was asked to do this project by Wendy Wagner. I had done the flash section for Women Destroy Science Fiction! and Wendy brilliantly thought that poetry might serve Horror better as the shorter section here—which makes sense, doesn’t it? I feel like nearly everyone I know can quote at least some of “The Raven” by Edgar Allen Poe. As appropriate as the short story is for horror, I feel the short poem has a significant place in the genre, too. Poe, and definitely Lovecraft, sought to capture something particular from language; whether or not their choices are to your tastes is another matter, but I think it’s uncontroversial to say that they aimed for the high reaches of feeling through their work; it’s no wonder that many horror writers turn to poetry with progenitors like that.

I wish we could have had more room; poets like Mat Joiner, Bogi Takács and Sonya Taaffe (just to name a few), all have stunning command of language and do exciting things with content—like, if you have a need to read about star-crossed lovers in space with a darker sort of turn, these poets are there for you.

I mentioned the perspective I came in on: pretty conventional, pretty limited. There’s a lot more to horror than Poe and Lovecraft, as much as we may owe them. The poets I found still strive for those depths and reaches of feeling. Most of the poems I read this summer had a narrative element, as well, which tickles me as a primarily fiction reader. But they blew the form up; left rhymes behind for jangly line ends and jagged section breaks. And what they talked about was different, too.

These lovely dark pieces capture a sampling of the breadth of dark poetry by queer people and I feel like beyond the lush words and the neat innovations on form, what will hit you is that there’s a whole universe of diverse and compelling expressions here. Brit Mandelo takes us into a creepy new house, Shweta Narayan tells us about dark spells, and W.H. Pugmire takes the horror to a near-cosmic level; and each presentation, from the personal horror of us “cerebrated monkeys” to the creeping-horror-behind-the-stars, could be a little awful world of its own. 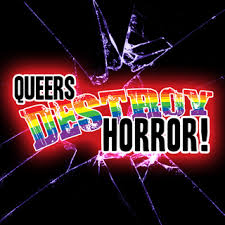 The Queers Destroy Horror! special issue was guest-edited by the following:

Wendy N. Wagner grew up in a town so small it didn’t even have its own post office, and the bookmobile’s fortnightly visit was her lifeline to the world. Her short fiction has appeared in magazines and anthologies including Beneath Ceaseless Skies,The Lovecraft eZine, Armored, The Way of the Wizard, and Heiresses of Russ 2013: The Year’s Best Lesbian Speculative Fiction. Her first novel, Skinwalkers, is a Pathfinder Tales adventure. When not guest-editing, she’s also the Managing/Associate Editor of Lightspeed and Nightmare. An avid gamer and gardener, she lives in Portland, Oregon, with her very understanding family. Follow her on Twitter @wnwagner

Robyn Lupo has been known to lurk around Southwestern Ontario, complaining about the weather. She helped destroy flash-sized science fiction in 2014.

Megan Arkenberg lives and writes in California. Her short stories have appeared in Lightspeed,Asimov’s, Strange Horizons, and dozens of other places. She procrastinates by editing the fantasy e-zine Mirror Dance.