Ghosts in Space and Ghosts on Earth

Another couple of horror-tinged offerings. These words are written only a few days into the New Year, and though it is irrelevant to the subject matter at hand, I wish to start with a vehement pronouncement: 2021 was a particularly terrible year for your friendly neighborhood columnist. I mean, not just unpleasant, but awful, catastrophic. I am happy to be working on something, anything, in a new calendar year, and I welcome you, the recipients, hoping that you find 2022 a greater blessing to your own lives.

So here we go, two offerings in the haunted-house subgenre. Starting off: 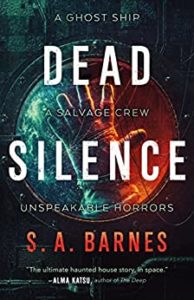 The strong temptation here with the space-based horror novel Dead Silence, by S.A. Barnes, is to make too big a deal about its structural similarities to Alien.

I mean, it is not exactly the hardest thing in the world to miss. A spaceship that functions as the workplace for a crew of blue-collar workers, working for a rapacious corporation, is on its way home when it receives an automated emergency signal and changes course to investigate. When the crew, headed by a tough-as-nails woman, arrives at the derelict ship, they discover that the place is, essentially, a haunted house, and that they are damned to encounter the same menace that doomed the craft’s original occupants.

Some reviewers will inevitably wax more scornful about this than I will.

I won’t because form follows function and there are only a limited number of ways to get space travelers into what amounts to a haunted house, because the unfortunate-response-to-a-distress-signal goes back further than Star Trek and Forbidden Planet, and because Claire Kovalik, the tough-ass woman in question, is not Ellen Ripley, and because the horrific menace her crew finds on the derelict, long-missing luxury cruiser Aurora is not an acid-drooling, rubbery metamorph.

Kovalik, for her part, is a barely functional, suicidal survivor of another horrific space catastrophe in her childhood, and doesn’t possess anything near the confidence levels of the sometimes shaky Ripley; she’s about two legs short of an upright stool just to begin with, is indeed already prone to traumatic flashbacks and hallucinations, and thus it seems the very last person equipped to handle the salvage of a space vessel designed to recall the aesthetics of an ocean-fairing cruise ship, whose celebrated and fabulously wealthy passengers were driven to madness and mass murder. But then, she is no less equipped for this than the more stable members of her crew. The ship is bad news.

I must report that there is ultimately a rational explanation for what has happened, and that the story is ultimately more science fiction than horror. But it certainly has one foot in each genre. The bound galley I received bore the following tag line, larger than the title: A Ghost Ship. A Salvage Crew. Unspeakable Horrors. This is semaphore to people capable of being drawn from the field of hard angles, competent protagonists and measurable phenomena to the field of ghosts and power-drills, both of which play significant parts here. And those of you who make the leap will find that you have not wasted your time. Narrator Kovalik is a well-realized protagonist who must face not only the hell of encountering something beyond her ken, but also the prospect of returning to encounter it again. She is in over her head, and for some time, she is helpless. But Barnes makes the case that she is more formidable than she thinks she is, and this is great, and if all goes right, this genre-straddling work should receive the appreciative audience it deserves, on both sets of shelves.

The underappreciated fall film Last Night in Soho (directed by Edgar Wright, 2021), is nothing if not a horror film, and it is somewhat sad that the trailers for it both underplay and overplay this fact, thus rendering it poison for audiences capable of being drawn to that genre label, and those who would rather run screaming from anything containing even a whiff of it.

Honestly, if you love horror, the movie will eventually get there. If you hate horror (and there are such people, who might encounter these words even in a publication like Nightmare), and prefer, let’s say, musicals, I deeply wish I could seize you by the shoulders and plunk you down in a chair to watch the first half or so, so that you could marvel at the fantasy sequences that demonstrate a substantial and breathtaking beauty before the first frissons of something terrible appear.

Eloise (the adorable Thomasin McKenzie, in what should have been a star-making performance) is a sheltered country girl who dreams of a future as fashion designer, and who enrolls in a school in London only to discover that her idealism and her retrograde love of all things Swinging Sixties renders her an eye-rolling bumpkin to her queen bee roommate and that girl’s snotty and equally judgmental friends. Intent on escaping that environment, she moves into an attic rental owned by landlady Miss Collins (the last screen performance of the giant Diana Rigg). Once she is there, she finds herself overcome with visions of one past tenant from many decades prior, an aspiring singer named Sandie (Anya Taylor-Joy).

What needs to be said is that these visions are, initially, just draw-droppingly beautiful, some of the most audaciously choreographed sequences of the year. Eloise experiences the times of Sandie’s life as a silent but clearly dazzled presence in mirrors, and there are plenty of mirrors indeed in the nightclub that Sandie marches into, with the confidence of a promising youth that seems to offer nothing but limitless potential. Sandie strides down a long staircase, certain that she will make the contacts she needs to achieve stardom, just by being there, and as this happens—and as Eloise rides along, wide-eyed and in a variety of visually inventive ways occupying Sandie’s point of view, the desired stardom does seem very possible, in large part because Sandie is played by an actress with enough personal magnetism that she is perfect in the role of a girl who thinks she can make those demands. It does not seem that unlikely, not for anybody played by Taylor-Joy and by extension not for Sandie. One could very well imagine this opening leading directly into a showbiz success story, and I the horror writer would have been perfectly content had the story continued to pursue that trajectory.

But that is not where the story is going. The story is headed for the tragedy of the way powerful men treat ambitious women, and via that, a study on whether Eloise can survive the echoes that have rattled on down through the years, via that rented attic. It transitions from glamor to terror quite nicely and succeeds in large part because the terrible things that happen are based in large part on terrible things that have happened, that are unfortunately still happening.

In the meantime, it is made with absolute genius, a master’s skill with visual riffs, and the ample support of players who include not just Rigg, but also Matt Smith and Terrence Stamp. (Thus, prompting the disrespectful observation that this movie includes Mrs. Peel, the Doctor, and General Zod.)

It is a great film, I think, and a casualty of audiences who would not take a chance on an unknown quantity and who preferred to stampede toward recognizable IPs. I really hate this about modern audiences. Recognizable IP is fine, but not if it’s all you’re willing to see.

See it at home, if you must. It is magical. Bright magic to start with, dark magic as it continues. It is one of the better films of its year.