Dispatches from the Frog

Last night as I wrote this, I woke up from a sound sleep because something in my little apartment was screaming. It took two of its screams, about a minute apart, to establish that this distress call was not a dream or something outside. I staggered out of bed and discovered my two cats, Harley Quinn and Philip Marlowe, deeply interested in the activities of a frog, clinging to the wall about four feet up. As I reached for the damn thing, it screamed like the heroine of a fifties horror flick.

I hope this month’s offerings are also interesting.

Crimes of the Future is not the only motion picture David Cronenberg has made with that name. Fifty years ago, he made another, unseen by me as of this writing, which from available synopses has no connection with this one except a similar level of in-your-face weirdness. Cronenberg is either trolling us or proceeding from the assumption that a fifty-year career is long enough to justify recycling titles.

This one, science fiction driven by Cronenberg’s signature body horror, is set in a poisoned near future which is changing humanity inside and outside. People are spontaneously growing new organs, and either allowing them to accumulate inside their bodies, or removing them as soon as they arrive, presenting the amputations as performance art.

I can imagine some audience members bailing even before the first such amputation. We are first introduced to a child playing in trash-strewn shallows within sight of a derelict capsized ocean liner. His mother shouts at him from the nearby house, ordering him not to eat anything he finds. The boy reluctantly obeys, only to later gnaw on a plastic trash can. In subsequent fury, the mother smothers him with a pillow. I suspect that’s when some of the Cannes audiences left, but the movie doesn’t settle down into a more comfortable groove. Shortly afterward we are introduced to Saul Tensor (Viggo Mortenson), an ailing man whose body is always cooking some new organ, and his partner Caprice (Leo Seydoux), who takes a deep sensual pleasure in cutting into his body. This is their version of sex, we understand, and in this new era it is not even unusual, as they soon meet a woman named Timlin, played by Kristen Stewart, who discusses these medical realities while seemingly on the edge of total erotic meltdown.

All this does eventually have a point, and until then, the women are the stars of this thing, truly.

I have written elsewhere on how I admired this film but do not love it, and how I will not recommend this to anyone for whom this subject matter is at all questionable. That is most people. I think it’s a minor masterpiece but also understand that the mass audience will, if they find their way to it at all, despise it. I need to report the overheard dialogue from the only two other people in the theatre where I saw it theatrically:

SHE: What did you think?

SHE: (Punches him in the arm.) You did not! You’re just screwing with me!

I honestly believe he was. I don’t know. Maybe he just got it. 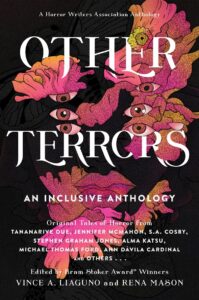 I have a personal policy against providing bad reviews of novels, in large part because there are so many good novels worth advocating and in part because I find it akin to kicking some well-meaning writer for no good reason. But sometimes there are observations worth making, and so, this blind item: I just read a novel of about three-hundred pages in which, at about the midway point, the main character arrives at a new location and submits to an interview. That interview is in large part about her backstory, and we get several pages where the character summarizes much that has already happened, and you know what? Those few pages function as what would have been the first movement of what would have been a crackerjack novelette or novella. I wish the story had begun there. I really do. What I wish to communicate is that the rest of it literally made me wonder if I’d contracted COVID-brain, because I mistook the natural reaction to a story that failed to flow for an actual cognitive problem on my part. I will not name the novel. But that happened. And I report that is the kind of thing that happens, occasionally, to book reviewers, who try to finish.

Instead, I want to direct readers to the new HWA anthology, Other Terrors: An Inclusive Anthology, edited by Vince A. Liaguno and Rena Mason, which features stories centered on marginalized groups.

I am happy to report that any fears of the stories all making the same facile points over and over—which is, excuse me, a common pitfall of any themed anthology and not just those which are conceived in any value of ideology—are, here, totally unfounded. The volume is filled with winners.

I can only name a few of the stories in the available space, but I especially enjoyed “Idiot Girls” by Jennifer McMahon, putting the relationship of two teen girls in the foreground of a story about a predator targeting kids in their town; “Waste Not,” by Alma Katsu, a rather killer crime story about a widow making a terrible discovery while cleaning out the hoarder home of her elderly and difficult mother-in-law; and “The Turning” by Hailey Piper, which addresses the anthology’s outsider theme in metaphor by positing a plague that transforms teens into pterodactyls.

The one I absolutely adore, admire, envy and will be dreaming about is “Incident at Bear Creek Lodge” by Tananarive Due, which closes out the collection with the period tale of a young Miami boy traveling to the lodge of his faded-celebrity grandmother, a terrible person. Over the course of the story he finds out, without quite understanding, what bitter pill exists in her past, and at the end there is a manifestation of something else horrific, that I suspect may baffle some readers: i.e., where the hell does this thing come from, and what does it have to do with all that came before? I reply that what it is a rather ingenious, and hellacious, metaphor for the devil’s bargain the grandmother has made, and the profit she sought for the deal; and Due could have included a page or two of rancid exposition explaining exactly what she sought to say with it, but I much prefer to have processed her point the way she wanted to, with the last images of the narrative reverberating my head. It is the best story in the collection, and I happily report that this is saying a whole lot.