In Hunter Hunter (2020), a grim-faced survivalist living off the land in Manitoba tries to protect his wife and daughter from a wolf, only to find out there are worse things in the woods. To get to the film’s gory, vengeful finale, every living thing on the screen must be tormented and brutalized, and every character undermined and negated. In the end, this pulp fiction pastoral elegy, with all its survival horror, serial killer, and revenge thriller tropes, feels like one long set-up for the big “punch line” at the end. Be aware that this movie contains numerous depictions of violence against animals and sexual violence against women (and that this review contains spoilers aplenty).

Hunter Hunter positions nature and culture (a word we’ll use to represent the somewhat slippery philosophical concept of “human society and technology”) as auto-annihilating forces that can never coexist without exploding into violence and death. At the juncture of these two forces is the Mersault family: taciturn and uncompromising Joe (Devon Sawa), at-the-end-of-her-rope wilderness wife Anne (Camille Sullivan), and their thirteen year-old daughter Renee (Summer Howell), who’s learned tracking, trapping, and skinning skills from her dad.

When their trap line and personal safety is threatened by a rogue wolf, it pushes the family to a crisis point. With the wolf stealing meat and pelts from their traps, the family will soon run out of food. The thing is, they’ve never been entirely successful at living off the land. Anne makes regular trips to town to sell beaver pelts and pick up supplies, but times are changing, prices are down, and there isn’t enough to get by. She wants to shift to a more normal lifestyle, but Joe refuses.

The rogue wolf is a bit of a red herring. For a moment, you almost suspect some supernatural thrills await you when the wolf surprises Anne and Renee and apparently kills the family dog. Later, Anne struggles to explain to the local sheriff why she found the wolf so threatening, eventually settling on the wolf just being especially “mean.” But the wolf never appears again, having served its role as a plot device to lure Joe away from his family.

While Joe is tracking the wolf, he finds it has been chewing on a human arm. Tracing the blood trail, he finds a grisly scene out in the woods—several young women, partly or entirely naked, have been tied or chained to trees and murdered (what else may have been done to them we can only infer from the killer’s later actions). Joe returns home for his big claw traps, tells his family he’s going out of walkie-talkie range for a few days until he gets the wolf, and lays the traps at the killer’s camp.

It’s especially frustrating when a movie has all the ingredients for something compelling, and simply fails to use them effectively. We have a killer on the loose in a desolate wilderness, a gruff survivalist hunting him, a family in peril, and the sheriff (Gabriel Daniels) gradually piecing together that something is amiss out in the woods. Will everyone crash together in a tense and thrilling climax? Sadly, no.

The first problem is that once he lays his traps, we never see Joe alive again. He’s murdered off-camera by the killer. But the biggest problem is how this movie treats Anne and Renee.

We know that Renee is thirteen. We know Anne has lived out in the woods with Joe for at least that long. At one point, Renee comes across a walkman and is utterly mystified by it and the sound of the music it plays, suggesting she’s had zero contact with civilization for her entire life. This is ludicrous—clearly Anne goes into town for supplies, and there are manufactured goods in their cabin, plus they have a truck with a radio, so Renee is not a feral child raised in a cave. But this is the reality the movie presents us with, that these two women are all about the hardcore wilderness life, that it’s all they’ve ever known, so we can take it at face value. Until the movie ignores it entirely.

As soon as Joe leaves, Anne and Renee struggle to function. They freak out when confronted by the wolf. Admittedly, they’re worried about their dog, and certainly a wolf is a threatening and potentially dangerous animal, but their full-blown panic seems odd for people who have surely encountered wild animals a few times before. They also can’t find food and are literally starving. Anne shoots a baby deer and then needs Renee to show her how to skin and clean the carcass, because Renee has been learning from her father while Anne apparently has been hiding under the bed for thirteen years. I’m sorry, their entire livelihood is trapping animals, skinning them, and selling their pelts, but Anne is clueless as to how to do any of this stuff? Anne eventually has an emotional breakdown when she’s forced to kill a rabbit she’s trapped—I’ve lived in a city or a suburb my entire life, and I’m less squeamish than Manitoba Wilderness Anne.

The way Hunter Hunter undermines its female characters becomes especially evident as it moves into the third act. Anne stumbles across a wounded man in the woods. Actor Nick Stahl exudes such a sense of oily menace, even when he’s unconscious, that it’s obvious immediately that he’s the killer—the killer Anne doesn’t know about, because Joe didn’t bother to tell her. She drags him home to help him, but when she later tries to get him to the truck so he can get to a hospital, he balks and insists on staying in the cabin with them. His ploy is transparently creepy, yet Anne later goes looking for food and leaves Renee alone in the cabin with him!

One of the best chills this movie provides happens when Anne, in desperation, radios Joe, hoping he’s in range. When she does, she hears his walkie squawk nearby. That’s when she finds his corpse, realizes the man in her cabin is probably not a good person, and we’re propelled to the film’s bloody conclusion.

This conclusion is ugly in a variety of ways. When she returns to the cabin, Anne finds that Renee has already been killed off-camera. The killer then drugs and attempts to rape Anne (which lets us infer a whole lot of horrible things about what probably happened to the girls at his camp and to Renee). Anne manages to fight him off, however, and ends up skinning him alive in Joe’s work shed just as the police finally reach them.

I have to give credit where it’s due to writer/director Shawn Linden. He helms this film confidently, with solid, albeit unspectacular cinematography by Greg Nicod (this is Nicod’s first feature, and Linden’s third as director). The film’s late 80s/early 90s setting is shown off subtly with the cars everyone drives and the technology available to them. It’s telling that this movie felt worth putting a fair bit of thought and analysis into, to see what went wrong, even though I ultimately disliked it. I think Linden has a flair for noir, but he may need to work with a different writer to really find his strength.

What about all that nature versus culture stuff? I usually don’t like to look for allegory in movies—you end up making a bunch of post hoc arguments or oversimplifying the story. But in this case, I suspect Linden had a specific theme in mind and wrote around it, which helps explain some of the inconsistent logic. The killer represents the modern world. When he encounters Joe, he kills him, because Joe, as the survivalist who refuses to join society, represents a purer form of nature. Renee also gets destroyed by the modern killer (whose Walkman so mystifies her) because she is nature, unsullied by modernity. Anne, who we know has rejected nature in her desire to join the modern world, is the only one who can defeat the killer. Indeed, she wears his headphones and listens to his music while she flays him.

The conflict between nature and culture is not equal. While nature is brutal and unforgiving, human culture eventually destroys nature. If the main plot doesn’t drive this point hard enough, it’s reinforced by the sheriff’s side plot, in which he continually has to deal with “yuppies” who have recently moved into their rural community and are having problems with bears. The sheriff has to kill the bears because they’ve come into contact with humans and become used to eating from their garbage cans.

There’s one other way to explain Hunter Hunter, and it doesn’t preclude the allegorical interpretation. Linden may have started with the carnage of the final scene and worked backward to set it up. Anne learning to skin the baby deer from Renee foreshadows what she does to the killer. Anne also uses an injection of a powerful anesthetic when she stitches up the killer’s wound. This same drug later ensures that the killer remains conscious and aware while she removes his skin, tearing his face away as his bulging eyes look on in horror (the film’s biggest gore effect, which is disgustingly effective). And Renee ends up being used simply as fodder to fuel Anne’s final transformation into the vengeful mother who is no longer meek or too squeamish to kill.

Linden is playing with the trope of the Final Girl Who Has Seen Some Shit, survived the horrors, and finds a moment of quiet at the end, spattered in blood and powerfully changed. But to get there, he has to make us believe she’s an incompetent idiot. The movie’s own lack of internally consistent logic makes any feeling of empowerment or righteous vengeance feel cheap and hollow.

If you’re looking for more horror with a wilderness vibe, you might try Panos Cosmatos’ psychedelic death metal vengeance trip Mandy (2018), the cosmic horror-inflected The Ritual (2017), or The Furies (2019), an interesting take on the Final Girl slasher trope that pits women against a variety of masked killers in a wilderness reality show setting. 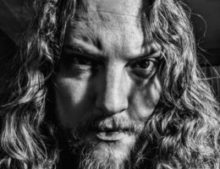 Ed Grabianowski is a writer of fantasy and horror from Buffalo, NY. His fiction has appeared in Black Static, as well as the anthologies Chilling Horror Short Stories, Geek Love, and Scourge of the Seas of Time (and Space), and he’s written non-fiction for Apex, Clarkesworld, and io9. He’s also the singer in a band called Spacelord.