The H Word: The H is for Harassment (a/k/a Horror’s Misogyny Problem)

It’s well known within the field that horror, in both movies and novels, has a long history of often (perhaps too often, some would argue) being misogynist, relying on extreme rape as a plot device. Although the victims sometimes seek revenge in a one-dimensional pursuit, more frequently it’s used to prove the masculinity of the male protagonist or to offer him a revenge motive. Other times it is simply used for shock value. The women within these stories are often graphically raped (because what is the purpose of raping someone if we, the audience, cannot experience it in great detail?) and murdered. It just so happens, by complete original happenstance, my fellow female horror writer observed, “. . . that if a woman needs to be traumatized lazy writers will use rape. Not as a deeply emotional growth experience, but as a way to make the hero angry, or put the woman in her place, or to make the evil person truly appear evil. The aftermath is hardly ever dealt with.” It is the case that women within these stories often do not exist as functioning, autonomous human beings, but mere placeholders for males who must swoop in to not actually protect them, because after all, they have already been abused and often died horrifically for all of our entertainment, but to allow them to take their rightful places as heroes.

Does this mean that rape should never be explored within works of fiction? Of course not; I don’t know anyone that would argue that. But in real life, rape is never justified and the victims have to live with the very real consequences of that experience. And although spouses, friends, and family members are often affected by it, we should never lose sight of where the true horror lies. (Although this is not always the case in real life, either.) Women who are raped are fully actualized human beings with dreams and aspirations and nightmares, both before and after being assaulted. Why, then, is rape so often simply a plot point, and the women who experience it so often cease to exist or are no longer important, whether physically or mentally within these stories? Why is the journey so rarely the victim’s?

Obvious examples most will recognize are The Hills Have Eyes, Evil Dead, and Last House on the Left, all of which are considered classics in the field and all have been remade within the last few years. Being an academic, this is where I would normally offer a content analysis of each movie, but considering my audience (and you all love nothing if not to be entertained) and space limitations, I don’t have the time, and, really, do we have to do that? If you haven’t come across these stories, or if you are a writer and you haven’t written them, then count yourself truly lucky.

Otherwise, let’s acknowledge that this plot device has been overused and accept it. Because although many people agree that this is the case, many won’t accept that viewing women as mere objects possibly fosters an environment of hostility and harassment for women within the field. Assuming, though, that rape is the ultimate form of unwanted attention and assuming there is a continuum, and rape is at the far end, we should ask ourselves where it begins. Harassment is not rape, but we nurture an environment within the genre where the latter is fantasy and thus the former becomes acceptable.

Harassment within the genre is a real problem, but although it’s often overlooked, and even outright ignored by some, women work to combat it. We whisper about those who have groped or made obscene comments; we warn each other of the men we should never ever be alone with. We sometimes comfort each other and chastise ourselves and get angry and get tired and . . .

Because it could affect our careers. It could make us look whiny or weak. And really, it isn’t that big of a secret now is it?

I’m going to tell you a story. It has nothing to do with rape. It has everything to do with harassment and silence. I could talk about having been followed around a convention, or being called a cunt, or that time the guy called me Aunt Jemima (look, racism and sexism!) to put me in my place in front of a group of white, male writers, or any host of things I’ve witnessed, but I’m going to tell you a story about a woman that I don’t know. I don’t know her name, and quite honestly, I don’t even remember her face. Instead, I remember what happened to her and my response.

This was at the beginning of my career and I was new to conventions. It was late one night, and several of us, including her, were in the lobby chilling out, as we are wont to do. This man walked up, and I was excited, swooning, because I knew him. Or at least, knew of him. Everyone at that convention knew him. He’s as close to famous as you can get without being Stephen King in the field. Anyway, we were all talking and chatting, and then the Famous Writer Guy bent over and stared directly into this woman’s face. Just hovering there, ignoring the rest of us, blocking her from us. The woman looked around Famous Writer Guy to continue the conversation. Then he started touching her, lightly rubbing his finger up and down her arm, and then poked her, hard. She held up her arm to block him and stepped away, doing her best to ignore him. Famous Writer Guy moved closer to her and began rubbing her again. She looked to me and to the group. She’s thinking what I’m thinking, “This is Famous Writer Guy, what can I say? If I scream at him to cut it out, I’ll look angry and as if I’m blowing it out of proportion. If I smile or talk to him, he’ll think I’m interested in him. I’m scared.”

But none of us said a word. Nothing to help her out. This was her problem. One that I was damn glad that I didn’t have, so that I could ignore the hell out of it.

After a moment, she gave this meandering excuse about needing to get up early and left. Famous Writer Guy wandered off shortly after. Finally, I leaned in and whispered to the guy beside me, “That was uncomfortable. I hate seeing it because I’ll never be able to see him the same way.”

The guy’s response: “He was drunk. He’ll be better in the morning.”

Now this story, like the cliché of rape in horror, does not represent the entire genre. I would even guess that things have gotten better and people are more likely to speak out now, if for no other reason than times have changed and feminist ideology is becoming more understood. But the genre is still difficult for women, as there are still secrets and whispers and, yes, people are still silent.

Likewise, I would argue that too often the nature of horror has fostered this idea of male superiority, identity, and prowess. While none of these things are inherently wrong or bad, they have too often given rise to the subjugation of women. And although this essay could represent many genres to varying levels, I have a vested interest in horror and I chose to write about it here now.

I am not here to tell my fellow writers to stop writing about rape. I do not even want to tell someone not to hit on a woman at a convention. But I would implore you to consider the ways in which you explore and exploit and think about rape and how this possibly affects your interaction with the women who share pages and spaces around you. We are all writers and we simply want to tell the best stories while being stimulating and engaging for our readers.

With that, I hope I have done that for you here. 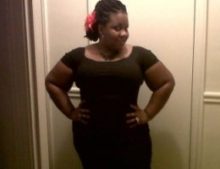 Chesya Burke has written and published nearly a hundred fiction pieces and articles within the genres of science fiction, fantasy, noir and horror. Her story collection, Let’s Play White, is being taught in universities around the country. In addition, Burke wrote several articles for the African American National Biography in 2008, and Burke’s novel, The Strange Crimes of Little Africa, debuted in December 2015. Poet Nikki Giovanni compared her writing to that of Octavia Butler and Toni Morrison and Samuel Delany called her “a formidable new master of the macabre.”

Burke’s thesis was on the comic book character Storm from the X-Men, and her comic, Shiv, is scheduled to debut in 2017.

Burke is currently pursuing her PhD in English at University of Florida. She’s Co-Chair of the Board of Directors of Charis Books and More, one of the oldest feminist book stores in the country.