The H Word: Food for Thought

I haven’t eaten meat since I was eleven. I was the only vegetarian in my school, in a little farming town where the largest employer was the local slaughterhouse. It wasn’t an easy decision to swim against that overwhelming social current, but it’s one from which I have never since retreated. Looking back, I see a willful child stretching for individuality and control over her life, but I think that even then I understood what I do now: that on a fundamental level, what we choose to eat defines us. It is a decision made every day, steeped in centuries of tradition, bounded by geography, income, and biology. As a child, my choice to become a vegetarian was sometimes met with derision, even outrage. The responses were startling in their ferocity. I quickly learned that there were three topics to avoid in polite company: politics, religion, and the eating of flesh.

Twenty years later, I am an author living in a progressive city where my dietary habits are so commonplace that they are almost a non-issue. The issue of meat still fascinates me, though, and plays a role in my first novel—a story set during the outbreak of a plague for which immunity can be obtained in only one way: by eating the flesh of an infected victim before they detonate into a cloud of bloody mist. The story is focused on topics of instincts and genetics, with the flesh-eating taking a backseat to more pressing questions about humanity. When I began to talk about it, though, I noticed a recurring response to its pitch: I’m not so sure about the cannibalism.

This response was not entirely unexpected, and yet I found myself circling it, following its echoes back to the reactions I witnessed as a vegetarian child. The eating of human flesh is a long-standing trope in the horror genre, but it remains as popular and shocking as ever. Similarly, the eschewing of meat is an ancient practice that, even today, can elicit curiously strong reactions. These responses felt like two sides of one intangible coin that I was unable to catch and properly dissect. I found myself thinking of my main character as I walked through the meat section of my supermarket; past rows of gleaming, plastic-wrapped cuts of dark muscle, and decided that somewhere in the maze of flesh, there was a link.

There are few lines that we, in modern society, agree that people should not cross. Cannibalism is one of those lines, despite the fact that every culture can point to moments in its past where it has taken place. The eating of fellow humans is both intriguing and repellent in equal measure, making it perfect fodder for tales of horror. From Dr. Lecter’s elegant parties to slavering hordes of zombies clawing for brains, popular fiction is filled with people who devour one another. Antagonists in post-apocalyptic worlds capture and eat their fellow survivors. Evil corporations grind their victims up and feed them to the unwitting masses. Vampires drink human blood, and one could argue that werewolves are simply cannibals with an exaggerated case of hirsutism. An overwhelming number of horror stories put the heroes at risk of becoming someone else’s dinner.

These tropes spark at our primal fear of being eaten, harking back to days when our ancestors kept watch for predators in the night. Primitive humans hunted, surely, but we also bear psychological scars earned through millennia of falling prey to bigger, stronger animals. We haven’t always had the security of walls and weapons, and our plight once had more in common with that of the lamb than of the prowling lion. I wondered, then, if this was the link between anti-vegetarian sentiment and the fascination that our species holds for the consumption of itself. Is it an acknowledgement of our ancient link to the herd animals whose bodies line our supermarket shelves? A deep-seated empathy that we would prefer to ignore?

It’s possible. Still, I found myself tugging at the emotion like a stray thread, unravelling my reasons, as a vegetarian, for forcing my main character into a world where she must eat others to survive. There is little potency in her fear of infection. That’s a motivating influence, but it doesn’t cut to the core of her existence. Instead, the true sense of horror is felt when she catches a glimpse of the dark beast that lives inside her. The one we all carry, made of eyes and jaws and hunger. It isn’t being eaten that she fears—it is the act of eating others, and of becoming one of the monsters that haunt so many tales. She fears the instinct to survive, and what it forces her to do. Through her eyes, we must not only confront our existence as creatures made of meat, but as those who will do anything to feed.

This is a dark but undeniable law of nature: under the right circumstances, humans will eat each other. It’s part of us, built into our DNA, rearing its head through the allegorical creatures of our stories. What are monsters but projections of our own psyche, given life through the prism of fiction? The intense disgust we feel when we read of cannibalism is a kind of resonant frequency—a secret chord inside us, played upon to elicit horror at the things we fear we may be capable of, too.

I believe it is this fear and empathy that give stories of flesh-eating their power—not just empathy for the innocents, but for those who devour them. As to who we connect with more, we need only look to the characters we remember most clearly. Those whose presence takes us into that unique space of intrigue and discomfort. When I think of vampire stories, I think of Dracula—not of his victims. My mind easily conjures images of werewolves and zombies, but not of their dinner. I can’t speak for everyone, but for me horror has always been about the monsters.

As a young vegetarian, I liked to tell myself that those who mocked my choice did it out of an internal conflict to which they had blinded themselves. An aversion to empathizing with the animal on their plate. I thought that was the link between the two sides of the coin. Now, I wonder if that conclusion was misguided.

Maybe the unconscious reflex that drives both reactions—horror at cannibalism, and contempt of vegetarians—isn’t triggered by empathy at all, but by the knowledge of what we would do to survive. A glimpse of the beast inside us, of those dark jaws. Maybe I was the blind one after all, and their derision was simply that—derision. A condemnation of my naiveté through the unspoken words that passed between us.

Perhaps, through my choice, my eleven-year-old self was declaring that we should not eat animals because we do not eat people.

And those who chided me replied: Oh, but we do. 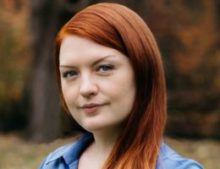 Emily Suvada is the author of the upcoming young-adult novel, This Mortal Coil, to be published by Simon Pulse in November 2017. Emily was born in Australia, where she went on to study mathematics and astrophysics. She previously worked as a data scientist, and still spends hours writing algorithms to perform tasks that would only take minutes to complete on her own. When not writing, she can be found hiking, cycling, and conducting chemistry experiments in her kitchen. She lives in Portland, Oregon, with her husband.