Welcome to issue 103 of Nightmare!

I don’t set out to create a theme for each issue, but as I read submissions and compare new pieces to stories I’ve bought along the way, I find that stories tend to have a distinct “taste” that compels me to group them together. Sometimes I’m not even sure what that flavor is until I’ve put together the issue and sat down at my desk to write the editorial—and then the flavor leaps out at me, as obvious as the blood on a murderer’s hands.

This is one of those issues. It’s an issue about something fine and good that has been terribly spoiled, and for me, one of the pieces touches on something personal.

My father taught me to shoot when I was nine years old. I’ve always been an okay shot, not good, not terrible, and I’ve really only gone out plinking a few times; ammunition is never as cheap as you wish it was, and it’s not so easy to find a good shooting spot these days. But taking out the little .22 rifle and demolishing a pop can or exploding a watermelon filled me with a weird delight. It wasn’t just the destruction, of course (although that was neato), but the rare sense of connection between my dad and I (and later with my kid brother).

Even as a kid, though, my feelings about guns were complicated. They were fun, but they were also loud and a little scary. I grew up in hunting country and also saw plenty of “varmint” animals get shot, and the kinds of destruction a gun could do to a fragile, furry body always shook me. And after the shooting at nearby Thurston High School in 1999 (I was in college by that time, but Thurston was just a few miles from the shopping mall where I grew up going back-to-school and Christmas shopping), it became harder and harder to separate the fun of guns from their larger social repercussions. These days, it’s impossible for me to think of them with any kind of enjoyment, except a deep sense of nostalgia: a fine time now well and truly spoiled.

In this month’s issue, Paul Crenshaw touches on gun violence in his essay “Step on a Crack”—our first piece of creative nonfiction in “The Horror Lab.” It’s a nasty little piece, and I hope you enjoy it.

Our other miniature piece comes to us from Canada. Eileen Gunnell Lee’s icy flash story “When the Snowshoe Hare Turns White” touches on one of the world’s worst crises: global climate change. It’s a ghost story like no other, and for me, deeply terrifying.

Our full-sized horror stories include a dark fantasy treat from A.T. Greenblatt—“Family in the Adit,” a story of a well-planned meal gone horribly awry—and the hilariously dark “Paradise Retouched” by Marc Laidlaw (if you’ve ever stayed in a vacation rental or an Air B’n’B, you might be inspired by the prank at the heart of this story). I hope you enjoy them as much as I have! 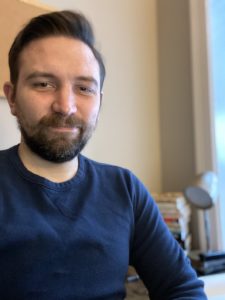 This month’s mini-interview is with our editorial assistant, Alex Puncekar. Alex helps out at both Nightmare and our sister magazine, Lightspeed, and he’s a blast to work with.

How did you get started working with Nightmare?

I started in 2017. I had been working with Lightspeed since 2016 while I was in grad school, and John Joseph Adams needed some extra help with the social media posts for both Lightspeed and Nightmare, so that’s how I was welcomed onto the team. Since then, I’ve also been reading slush and completing the odd assignment here and there.

What’s your favorite part of your work here?

My favorite part is interacting with other writers and professionals in the field. I love learning about other processes and ways of thinking about writing, and especially what was going through someone’s head about a piece of theirs we’re publishing. I have another favorite part (I can use two, right?) and it’s being able to see how the publishing process for magazines work. I was a staff member for a literary magazine while I was in college (Jenny Magazine jennymag.org, I will always love you), and there’s something always thrilling about putting out a new issue every month.

Would you call yourself a horror fan? If so, what brings you to the genre?

Y’know, prior to 2017 and my work at Nightmare, I’d say I was more of a horror bystander than a fan. I was always fascinated by it, but for some reason never made a deep dive into it. Coming to work with Nightmare has given me the opportunity to really get into the genre, and all I can say is that I’m loving what I’m being exposed to so far! There’s certainly a lot I have to catch up on, so I’m always open to recommendations!

I’m a huge fan of the type of monster that’s more of an “unstoppable force” than an actual villain. The kind that is simply trying to ensure its own survival by adhering to its own nature. Monsters like the xenomorph from Alien, the alien from The Thing, and the entity from It Follows. Other than looking incredible (the obvious exception being the monster from It Follows), these monsters inspire a fear that’s quite unlike other monsters in the genre.

Thanks so much, Alex! We couldn’t make Nightmare as terrifying without you.

And thank you, dear readers! I hope this issue is at least a little upsetting and miserable—in the best possible way!

Wendy N. Wagner is the author of the horror novel The Deer Kings and the gothic novella The Secret Skin. Previous work includes the SF thriller An Oath of Dogs and two novels for the Pathfinder Tales series, and her short stories, poetry, and essays have appeared in more than fifty venues. She also serves as the managing/senior editor of Lightspeed Magazine, and previously served as the guest editor of Nightmare‘s Queers Destroy Horror! special issue. She lives in Oregon with her very understanding family, two large cats, and a Muppet disguised as a dog.