They say this about the best horror writers, but it’s true of all the best fiction writers in general: you need to seem heartless.

This is a wholly different animal than actually being heartless.

You need to feel some compassion for your characters, some understanding of their feelings and some concern for their respective predicaments, in order to produce the desired result: reader engagement. But you need to seem like a remote and angry shepherd, who cannot be trusted to guide your characters to a painless happy ending. Even if that is the destination, you need the reader to believe that you’re capable of anything, that not all problems will be solved, that not everybody who deserves a happy result will achieve one, and that the worst will not always be averted in the nick of time.

(With horror fiction in particular, that genre which commemorates life’s sharpest edges, most regular practitioners also need make sure that they don’t always push the last survivor into the abyss, just before the close; that way lies futility, and it honestly takes a singular mind like Lovecraft, all his other problems put aside, to work that vein to the near-exclusion of all else.)

But the basic premise remains: you need to seem heartless. While still having a heart.

And as it happens, synchronicity provides us with a pair of volumes by two of the best short story writers in the field, both putting the most brutal aspects of their imaginations on display, while accidentally, and delightfully, arriving at almost the same place.

The two books are Gorilla in My Room: Stories by Jack Ketchum (Cemetery Dance) and DJStories: The Best of David J. Schow (Subterranean Press), both handsomely-produced, both collections containing their share of what Schow described as, in the afterword of one memorable story shortly to be discussed, “ultraviolence.” 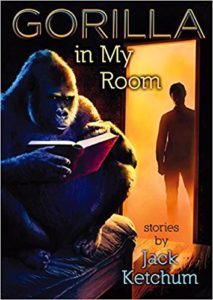 It needs to be said that while Schow’s book is better, this is because we are comparing apples to oranges. His volume is a career retrospective, compiling his favorite and “best” short fiction over a span of forty years; Ketchum, whose outstanding Peaceable Kingdom is a volume to rival it, is here providing us with a collection of odds and ends and stuff he’s been up to lately. A “stuff I’ve been up to lately” book, whatever its quality, is at some degree of disadvantage when contrasted with a “best stuff I’ve ever done,” volume. So put that aside, just to begin.

Also note that the two writers, who work with similar dark matter, have very different voices. Ketchum tends toward transparent prose (that can nevertheless slice to the bone), Schow plays more stylistic games with language (cutting just as deeply with added barbs).

Ketchum gives us a couple of stories connected to the menace first introduced in his pivotal and controversial novel Off-Season, about a brutally feral tribe abducting, savaging, and eating people in coastal Maine. Of those, one is “Cow,” written with filmmaker and occasional collaborator on both celluloid and paper, Lucky McKee, about a man who, with his friends, is unlucky enough to be attacked by that tribe and taken prisoner after everyone else is murdered. His fate among the cannibals is to be forced to eat what they eat, to commit acts that revolt him, and ultimately to live in a condition of mutilated bondage that reduces him to life as what the title suggests he’s reduced to, a farm animal.

“Winter Child,” another story set in that universe, has a little girl of the cannibal tribe adopted by a loving and well-meaning man, to effects brutal and unfortunate for him. Other stories here, like “Bully,” effect similar apparent heartlessness, and you will find among the others “Group of Thirty,” in which a horror writer very much like Ketchum meets a reader’s group intent on confronting him and taking violent exception to the cruelty in his work. Heartless. 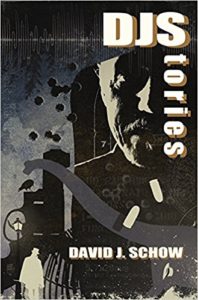 And if you check out the Schow collection, you will find stories like “Not From Around Here,” (1986), about a new homeowner whose perfect family is graphically predated by a monster prowling the woods around the house; “Refrigerator Heaven,” (1992) about a man spirited away by a government interrogation squad that tortures him at length, and takes forever to realize that he’s not even the guy they were looking for; and “Life Partner” (1991), about a woman whose oaf of a husband fails to wake up one day, and who she is sufficiently conflicted about to just permit to lie there, even as his initially comatose state enters the realm of post-mortem rot.

And then there’s the story I have remembered vividly and with something like awe for close to thirty years, a tour-de-force of unblinking prose put to the service of what Schow calls “ultraviolence.”

In “Bad Guy Hats” (1990), a gang of spree killers who vividly massacre the patrons of a convenience store are stalked by another pair of spree killers who are simply better at this despicable form of recreation than they are, and like hunting bigger game. There is no “protecting the innocent” involved; the newcomers have nothing but contempt for the innocent, and perpetrate their own horrors along the way. You might perceive some hope of the scales being balanced, at the end. But if that is to happen at all, it is outside the scope of this story, which is a blood-soaked exercise in unblinking over-the-top carnage, rendered unforgettable by the sheer energy with which it’s told.

Heartless. Both of them. Brilliant writers. Poets of human brutality. But heartless. Right?

And here is where we arrive at the divine synchronicity that makes our point.

What are the odds that two writers so well known for putting their characters through one form of splattery hell or another, would more-or-less simultaneously come out with collections that come down to these stories so resonant with one another, that both find such beauty in the fading of the light?

Consider too that Ketchum also gives us “That Moment,” a very short story of only twelve words, with no goal deeper than making us cry over the bond between a human being and a dying pet cat. The author of “Cow” and Off-Season wrote that.

As I said, you need to seem heartless.

But the operative word in that sentence has always been “seem.”

—Note from the author: Written before the loss of Jack Ketchum.