Your friendly neighborhood columnist wants to be expansive. He really does. He loves spending his allotted one thousand words (and sometimes, depending on his long-windedness, more) on the virtues of one movie, one book, in the full space allotted to him.

Sometimes this doesn’t work out. Sometimes he is driven to releasing his references in many pieces, like shrapnel. This is one of those times. 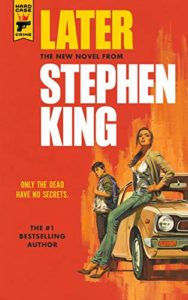 So, we start with Later, by Stephen King, a novel that begins with its young protagonist apologizing for the prevalence in this, his life story, of the title word, “Later.” It seems that the narrative takes place from his youth to his young adulthood and is a collection of loosely connected incidents, that just begs for that titular connector.

I suspect that the title and the opening apology are pre-emptive strikes by an author who made that discovery while doing his clean-up draft. This is known in the biz as putting a lampshade on it.

The work itself is what emerges when a brilliant seat-of-the-pants writer like King produces something that doesn’t entirely congeal: a work that among other things introduces a deadly supernatural menace that lurks in the background for much of the narrative only to flit off rather than confront our hero.

The subject is a boy who sees dead people. It’s not a bad book, and among its treasures is the true villain, a problematic figure once close to our hero who makes all the wrong decisions, degenerates into a more terrible version of herself, and ultimately becomes a threat. She is terrifying. We are all a few bad decisions from becoming that person.

All together, Later is a fast and entertaining read, and it is damning with faint praise to say that it is thoroughly middling King that never quite catches fire, another way of saying that it’s better than many of us lesser talents are forced to lead with. 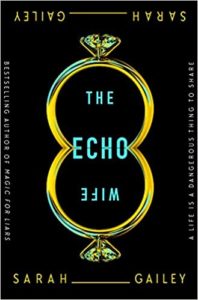 Sarah Gailey’s The Echo Wife is pitched as science fiction and may receive some packaging as a thriller, but is close enough to horror (via its early central murder, the psychological tightening of the screws that follows, and its most-definite shared DNA with both Ira Levin’s The Stepford Wives and Mary Shelley’s Frankenstein), that I can justify its coverage here.

Evelyn Caldwell is a leading scientist who is in the final stages of perfecting her process for growing adult clones which can be grown at will to perform brief and unpleasant tasks before immediate disposal. It is key to our understanding of her character that she has no ethical problems with this, even after her research has led her to commit dozens of such disposals, without qualm.

She is also a new divorcee whose loutish ex-husband has betrayed her by using her tech to grow Martine, a version of herself who has been conditioned to submissiveness and compliance, rendering her in his eyes the perfect wife.

Evelyn is what is frequently called “a difficult woman,” in that she is focused on her career, uninterested in the motherhood track, and not always sympathetic to what the man in her life wants at any given moment. She is also a “difficult human being,” which shouldn’t be a different rubric, but is. She is not all that much interested in the company of other human beings, or in their problems. She is focused to the point of mania, she avoids active friendships, she has a lacerating personality, and she is not someone to whom empathy comes naturally. She is horrified by the mere existence of Martine, a woman who, because of the way she’s been made, is the type who waits for permission before speaking or entering rooms. Evelyn is horrified in specific by every manifestation of Martine’s ingrained helpfulness, her obeisance to the cues of others, her seemingly muted personhood.

Then, early on, murder intrudes, and the two become forced allies.

Gailey’s detail work provides such a vivid portrait of Martine’s endless (and, to Evelyn, maddening) instinct to serve. But at the same time, the narrative also provides us with a fully rounded portrait of Evelyn, who is so callous toward others that she horrifies us with her most throwaway thoughts. And then there’s also the sense, implacable, that Martine is not as without resources as she seems.

Evelyn and Martine represent extreme models of womanhood, joined by their respective connections to the same faithless and selfish man. The contrast between them functions not just as illustration of the way women at both ends of the spectrum are affected by the roles expected of them, but also as the old horror-story dilemma, played with unerring expertise here: to wit whether it is the Dr. Frankenstein figure or the creature created by the doctor’s science who emerges to our senses as the bigger monster. But maybe there’s one more heinous than both.

A brief note of a film that may be significantly too old for me to cover at length here but has entered my orbit a few years after its film-festival release: Cold Skin (Spanish), a 2017 film festival release that seems to be hitting the streaming services just now. It boils down to a look at cultural oppression in the form of two men protecting a lighthouse from a nightly invasion of murderous mer-people, but it’s more complicated than that, and worth investigation.)