Publishing lag time being what it is, your friendly neighborhood media columnist writes these words at the height of the enforced quarantine forced on us by COVID-19. It is possible that some of those I directly address are no longer here to read them. One can only hope that I address the post-Apocalypse, and that none of you are putting on bondage gear to war over gasoline. In the meantime, I present a couple of cultural artifacts from the world before.

The Master’s Last Tale of the Living Dead 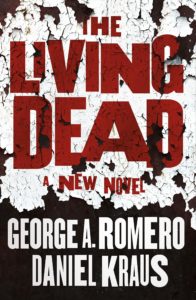 George Romero was of course one of our genre’s patron saints, a fellow who created an entire subgenre that continues to spread like the plague he posited no matter how often it has been pronounced dead. At the time of his death he was working on an epic novel about the zombie apocalypse, which was completed by Daniel Kraus, and so we have The Living Dead, which is epic in every sense of the word, including the literary: because, by God, does this thing have some fantastic turns of phrase, and not just when discussing various garlands of viscera.

The narrative is strangely and beautifully structured. Much of it appears to be separate but free-standing novellas, covering the adventures of various characters whose lives are disrupted by the rising of the dead. These characters include Luis Acocella and Charlene Rutkowski, medical examiners whose patient rises off the slab in mid-autopsy; Greer Hoffmann, a hopeless teen living in a trailer park who finds herself fighting for her life when the dead rise; Nathan Baseman, a television news producer who is determined to report the disaster for as long as the power stays on, with the help of a walking joke of an anchorman derisively known as The Face; and Karl Nishimura, who is stationed aboard an aircraft carrier when a cascade of deaths turns the place into a floating slaughterhouse. A substantial percentage of the book appears to be just a story collection. It is only after we follow each of these tableaus to what appear to be their natural conclusions that we start revisiting these characters at shorter length, and start building to the part of the novel that fits no model that has come before, a deceptively quiet epilogue set many years later in which the remnants of humanity, who include several of the people we’ve followed, appear to be headed for a peaceful accommodation with the dead— an actually evocative, fresh interpretation of the hoary zombie phenomenon that I cannot recall anyone ever advancing before. Alas, and alack, there are always bastards. The bastards screw up everything.

The best zombie novel ever written, horrific and witty in equal measures, it is best discovered fresh, which is why your friendly neighborhood reviewer herewith refrains from telling you all about it. But some observations unconnected to plot are worth making. First, that friendly neighborhood reviewer was delighted by fan-service paragraphs that connect this narrative not just to the scenarios of each of Romero’s zombie films, but even to most of the man’s non-zombie work (and that means that there is a reference to the motorcycle gladiators of Knightriders). Secondly, special kudos are due an interview with the novel’s most obnoxious person, a schlock movie producer who doesn’t see the point of books in general, and confronts an actual librarian with the (to him) slammer, “You’re telling me you’d rather spend weeks reading The Da Vinci Code when there’s a perfectly good movie telling the same story?” His estimated reading time, weeks, carries a lot of heavy lifting. Weeks. Jesus. And that kind of perfect word choice is all over his characterization, and the characterization of every character who is on stage for as long as a page. Hell, the book is worth cracking just for the toxic neologism, Mendicans, coined by less-than sympathetic person who you could very imagine using it. Mendicans. Jesus. 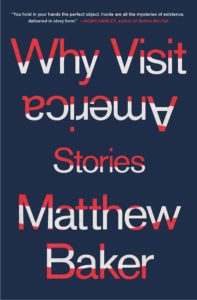 Matthew Baker is a writer new to me who has an upcoming short story collection, Why Visit America: Stories. The genre is “literary fiction,” the overriding theme funhouse-mirror visions of the titular country’s quirks and obsessions, and though many of the stories are speculative or fantastic in one way or another, with several qualifying as science fiction and a number of others slipstream in one form or another, but he is difficult to put in a single box. I do, however, think that the contents here are worth investigation by horror readers; they feel dark, most of them, and a few suggest the more literary, observational palette of a Shirley Jackson.

I will call your specific attention to the opener, “Fighting Words,” in which two bookish adult brothers take it upon themselves to observe and stalk the bratty, probably psychopathic kid who has been harassing their niece, their ultimate plan being to put him out of his misery. These are two grownups planning to kill a child, albeit a quite likely evil child, and the story’s greatest conflict is with their nephew, the affected girl’s brother, who susses out what they’re doing and cannot quite accept their refusal to stop planning and get on with it. It’s a story in part about parsing the various levels of evil, that which we react to, and that in which we engage via our hatred for it.

I will also call your attention to “Rites,” about a version of America where custom now decrees that people commit suicide at about age seventy, and one odd duck, Uncle Orson, who scandalizes his family by refusing to; and to “Testimony of Your Majesty,” an inversion of the class system.

This is a first-rate writer no matter where we choose to categorize him, and he’s one of us in spirit, even if not one of us in publishing category. Check him out.