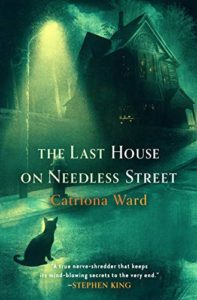 The Last House on Needless Street, by Catriona Ward, takes its own sweet time telling you what it’s about, and even, for a time, what genre it belongs to. Is it fantasy? Well, one of the characters is a cat who likes to read the Bible, and who stares out the window of its home longing for the stray who wanders by on its own errands. What’s up with that cat, really? Then there’s a next-door neighbor, emotionally crippled by the past disappearance and probable murder of her sister, who is now grown up and so obsessed with the crime that she’s moved in next door to the guy she suspects of the crime; but is she the viewpoint heroine, or something else? And then there’s the fella himself: a guy who we do not need to spend much time with, but is he as sinister as he seems, or just a pathetic, damaged soul who deserves our pity rather than his loathing? Honestly, this book is so driven by serially unreliable narrators, beings who are so completely not to be trusted with what they tell us about what’s happening, and what they’re telling us about themselves, that the reader is doomed to hundreds of pages of second-guessing, of trying to connect the dots, and of ultimately saying, “Ahhh, so that’s what’s been going on all along.”

I am here to testify that Catriona Ward knows exactly what’s going on, and that she will eventually spill the beans, even if by then you will have gone back and forth for some time about not just that, but what genre this book is. The provisional explanations can include child abduction or serial killing or changelings or more supernatural devices, and for this reason, your correspondent’s own reaction included a fair amount of frustration, borne of the fear that this novel was like one of those multi-season TV shows where the antagonists include a vast and labyrinthine conspiracy, and the protagonists spend entire arcs just spinning their wheels, awaiting the explanation that the show-runners do not actually know (I am looking at you—among many others—Lost). But Ward knows what’s going on and Ward pulls this all into a satisfying resolution, at which point an authorial note directly addresses the question of what genre this belongs to. I will leave it up to you to discover whether it is horror more than provisionally. 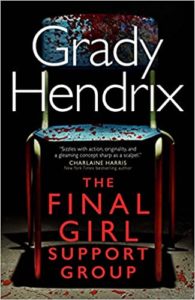 There have actually been a few movies and novels over the last couple of years addressing the horror-movie trope of the Final Girl, that initially innocent and unsuspecting girl (and usually a girl, as opposed to woman), who survives the slaughter of her friends and is ultimately left to take on the masked psycho of the piece all on her lonesome. At that point, people, she Jamie Lee Curtises his psychotic ass all over the auditorium. The prose and screen ruminations on this trope have been numerous enough to become their own mini-mini-subgenre, and your friendly correspondent is here to tell you that even with our next offering ready to purchase, he idly put his hand down on a new offerings display and found that it had alighted on another, so similar in its basic premise that much of its flap copy could have just as easily applied to this one.

Nevertheless, here we are with The Final Girl Support Group by Grady Hendrix, which posits a weekly gathering of women who decades ago survived homicidal rampages by killers who represent figures like Michael and Jason and Leatherface, put the bastards down, and then discovered that they also had to live through the sequels. All are targeted by cultists more fascinated by the killers than by the women, to the point where some of them live in various degrees of isolation, waiting for the threat to recapitulate yet again. It is inevitable that in the novel it does, and that Lynette Tarkington, a wounded bird if ever there was one, must hit the road to track down the figure responsible for the current assaults on her sisterhood, before all are slaughtered. Hendrix does a damned fine job giving Tarkington a wry and damaged voice, as well as a substantial degree of resourcefulness. He is also busily deconstructing the genre throughout. But one of the greatest surprises for me is the revelation, sitting right there waiting to be noticed, that the makeup of the titular occupants of church basement folding chairs itself recapitulates the venerable formula, in a way that is both stunning and delightful.

Bonus movie recommendation: The German film Blood Red Sky (2021), currently showing on Netflix, is action horror about a group of terrorists who have been paid to hijack a commercial airliner and make sure nobody survives, an endeavor that is interrupted by Nadja (Peri Baumeister) a young mother with a kid in tow, who had been hoping to get to America to find a cure for her vampirism. The action is fine, if not quite up to the standards of the movie’s closest equivalent, the Korean zombie epic Train to Busan (2016). What I must report is that the shortfall is well compensated for by the lead performance by Baumeister, whose portrayal of a monster who doesn’t want to be a monster captures both the horror and the pathos of multiple classical performances by people like Boris Karloff and Lon Chaney Jr., back in the era of the Universal classic horror films. She is what she is, she doesn’t want to be, this trip is her last chance to regain her humanity, and these pesky terrorists (led by Dominic Purcell), keep driving her further and further into the realm of monstrousness. If nothing else in the film works for you, and I am saying that I believe it occupies the plus column, watch it for Baumeister, whose work here is terrific and heartbreaking.