Worldbuilding is one of the greatest challenges in writing any story, but especially in genre fiction. Creating where your tale takes place, a location and society that feels real—no matter how fanciful—is essential. The more believable it is the more readers can invest in your characters and their conflicts. Just as the beauty of the most precious and brilliant of stones can be lost in an inadequate or flawed setting, so the most developed characters can be wasted in a thinly drawn, implausible world.

When I read fiction, I like to lose myself in the author’s imagination. I dive deep into the prose and let it play out in my head like virtual reality, to the extent that I lose track of what’s happening around me. Through books I have visited Oz, Narnia, Neverland, lived on the Moon and other celestial bodies, even explored our solar system and far distant galaxies, all rendered so convincingly that I could still see them in my head when I put down what I was reading. I can’t do that with a story with a cardboard set. My head needs convincing and complete sensory immersion, and that’s what I aspire to when I write.

Think of watching a beautifully acted film if its stars were only seen against a green-screen background. No matter how affecting their performances, you’d be distracted by the fact that they were in a monochrome limbo. A poorly thought out and badly written environment is just as distracting in fiction. Whether the setting is a world based on reality or completely created from scratch, set in the past, present or future, it had better ring true.

The two novels I read for this issue were as different as they could be, but both met that essential requirement well, in vastly different ways. 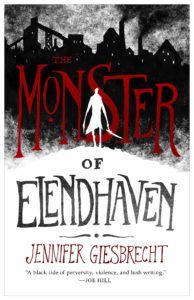 The town of Elendhaven is built around a water-filled volcanic crater-turned-harbor called the Black Moon of Norden. It’s set in a period reminiscent of nineteenth century Germany, on a world woven from elements both Earthly and eerily otherworldly. A magical crisis over five centuries ago left the entire North Pole pitted and scarred as if by a meteor strike. The waters were polluted by an arcane residue that mutates all life still in it, or any dropped in, and the air of the town is dank, smoky, and fouled by dying industry as the economy of the town collapses with the environment.

Occultism of any kind was outlawed and all witches or sorcerers either executed or lobotomized. What remains is a darker, duller world, where anyone who still has a trace of supernatural power keeps it concealed, uses it to survive. In the case of Herr Florian Leickenbloom, his covert talents are used to gradually avenge himself on the townspeople who locked his family in their plague-ridden mansion until everyone inside had perished—except him. Orphaned, with even his twin sister gone, Florian finds a new companion and eventual paramour in Johann, a grimly charismatic street urchin turned murderer and thief.

Johann is the main focus of the novel.

Giesbrecht tells the story from Johann’s point of view, and a charming one it is, despite his sociopathic tendencies. He knows only that he woke as a boy, fully formed, with no memory of who he was or how he came to be. When we meet him he’s just completed an all-too-familiar back alley transaction with a drunken sailor, who refuses to pay and then beats him when he protests. When the boy admits he has no name to insult him by, the sailor sarcastically christens him little Johann, from a childhood rhyme, a name the boy keeps. In return, he makes the sadistic sailor his well-deserved first victim in a long trail of them, and grows into a sly murderous thug. Johann discovers that he has a gift for not being noticed when he doesn’t want to be, and the ability to heal from any wound, even returning from death after he throws himself from a tower to test the limits of his power.

After he spends years as a formidable thorn in the side of the citizens of Elendhaven, stealing what he needs, winnowing down the less desirable elements of its population, Johann spies Florian and is fascinated. The object of his interest eats out at fine restaurants without paying, is deferred to by those easily considered his betters, and has made a nicely comfortable life in his mansion despite the failure of his family’s fortunes.

Johann stalks Florian long enough to gather evidence of unnatural abilities that seem to rival his own. He then confronts him in an alley with a sharp knife to his throat and a proposition . . . either hire Johann as a bodyguard or find out firsthand why he needs one. Oddly unafraid, Florian seems equally interested in his assailant, and thus begins an unholy alliance that bodes ill for the town and its gentry. Florian finds in Johann the fulcrum he needs to leverage the last of Elendhaven’s powers that be into oblivion.

Though he has amnesia about his origins, Johann still has a thorough understanding of his town, its inhabitants, and what he needs to do to survive. He moves into Florian’s decrepit mansion, all that’s left of the Leickenbloom wealth, bled dry by enemies foolish enough to believe Florian wishes them no harm. Once they settle in they begin to explore the limits of Johann’s invulnerability and its origins, and conspire to advance Florian’s vengeance. Complications inevitably arise, in part with the revelation of an undercover Mage Hunter who is hot on Florian’s trail, but it isn’t long before the polluted waters that surround the town are the least of its worries.

Dark and dank as it is, Elendhaven proves a suitably sinister setting for its inhabitants, and their story could not take place anywhere else as effectively. 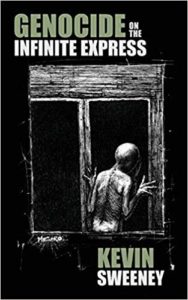 Sweeney’s novel takes place in as opposite an environment as you could imagine, inside a sleekly blank train with the minimal requirements needed to identify it as such. It rushes through pitch-black darkness, which is all that can be seen outside its windows. Its sole living occupant is another amnesiac, his own name and past as much a mystery to him as it is to us.

He wakes surrounded on all sides by dead bodies, which all resemble him. In fact, they are him—identical except for slight variations in hairstyles, clothes, moles, tattoos. Most of the corpses are human, some weirdly not, but all have been brutally murdered in many ways, though no murder weapons are in sight.

While worldbuilding on its own is a tough enough challenge, writers like to use other means to stretch their limits further. Lars Von Triers and Thomas Vinterberg, founders of the Swedish Dogme 95 school of filmmaking created creative obstacles for themselves by limiting how films were made to what was available on set, sound to only what was recorded, and a list of other restrictions aimed at pushing the director to make the most of what they had. Authors have used similar techniques to test their mettle, and reading that work is like watching a tightrope walker traverse a great height with no net, your excitement enhanced as you wonder whether the author can successfully make it to the end without crashing hard.

My initial interest in this work was in how the author kept finding ways to expand the variety of selves his hero finds as he works his way through the literal mystery train. Where is he? What are they? Why is he here, and how did he get there? Not all of those questions are answered, but his path through this dark and tangled wood does lead him to a female version of himself, who remembers her entire life and our world in intricate detail, which only increases their confusion. They team up and carry on, making fresh discoveries that get grimmer as they go. Inevitably, they begin to bond as they progress, which inevitably leads to questions first raised for me by David Gerrold in his twisted tale of time travel, “The Man Who Folded Himself.” What is sex with another version of yourself? Is it incest? Masturbation? The complications of that relationship and more arise as they move forward on the train and deeper into the story.

Sweeney has written a locked room mystery that only becomes more mystifying as his heroes continue to consider all the possibilities of where they are, why, and who or what the increasingly odd bodies are. By the end he offers us several options, a climax foreshadowed by the quote that begins the book, from “At Swim-Two-Birds” by Flann O’Brien, published in 1939. Tellingly, it’s a seminal work of metafiction, a genre that plays with its own reality and ours, jumping back and forth easily. The four multiple endings range from the plausible to the metaphysical. Pick which one you like, and if none of them are satisfying, the author seems to suggest that you can always consider your own.

Though the book is a literary act of sleight of hand, it is to its credit that it remains consistently true to itself and its intent, which is to open the door onto a surreal fictional world and pull us in. That I could stay with it to the end makes it as effective an exercise in its genre as Slaughterhouse Five or The Hitchhikers Guide to the Galaxy. It opens us to the larger possibilities of what can be cooked up with the basic ingredients of language, character, and setting. That’s what keeps it an entertaining read, even as you consider the possibility that this particular express could jump track and go over a cliff at any given moment.

It’s that thrill of uncertainty—truly not ever knowing what might come next—that keeps you reading, and it’s also what keeps writers writing. 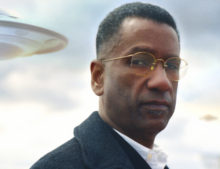