The Question Worth Answering 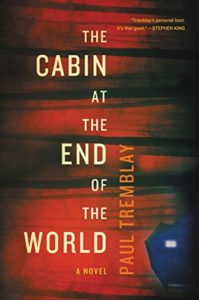 Many, many years ago, your devoted servant was more obviously still learning this sometimes-disreputable craft (he still is, hopes never to stop, and avers that any writer who says otherwise is likely not worth reading). A workshop participant provided him with the following comment, written in red Bic Pen in the margin of his current horror story (one that eventually got published, despite being not very good), beside a gratuitous, but particularly loving description of shotgun-scattered brain matter slowly sliding down a tenement wall.

She wrote, “Is this trip necessary?”

He thinks now, as he thought then, that this is a primal question, relevant to any story you might want to tell. It’s not just about gore. It’s about whether the events on the page, the emotional journey traveled by the characters, ultimately have a point beyond a bunch of things happening.

An astonishing number of published works and any number of filmed stories fail this simple test, and in many cases it’s not all that important. You want to present a frothy heist film, where the cute guy and cute girl get away with the money? Not much significance needs to hang on that hook. Or some story where a youthful protagonist has a largely stress-free vacation in Europe? Not much significance needs to hang on that hook. Hell, not much needs to hang on the hook of a bunch of heroes trying to stop a giant monster from stomping all the buildings in Sheboygan: as long as the stomping is fun, and their response equally compelling, then so be it. No deep thesis required.

It’s when you get into darker horror, and sometimes gorier horror, that the “Is this trip necessary?” test comes to the forefront. If your protagonist is imprisoned in a basement and tortured at length, then the ordeal we’re experiencing along with that unfortunate damn well does require a point. There must be a reason we’re there, aside from vicarious sadism. And an awful lot of horror stories, in particular horror films, do miss this requirement. Those stories where some group of nobodies is subjected to viciousness of the most awful sort, where one last survivor almost gets away only to be mowed down at the last gasp—if there’s no point, then we’re just masturbating to all the great blood and gore, for its own sake, thrilling to those descriptions of viscera for their own sake, and an emptier exercise can hardly be imagined.

One critic, addressing the Friday the 13th films by this criterion, coined the scornful phrase “Spam in a Cabin,” a reference to the characters being ambulatory meat waiting to be butchered. And that, at long last, brings us to today’s offering, The Cabin At the End of the World by Paul Tremblay, a novel which does indeed almost entirely take place in that traditional horror setting, the isolated wilderness cabin where any number of bloody atrocities can take place without the cops being called, or any neighbors intruding to ask why the rustic air is being disturbed by so much screaming. (Also: no cell phone reception, a condition that these days makes thriller writers sigh with the deep contentment of house cats. Getting rid of the cell phones does make everything so much easier.)

We are introduced to a married couple, Eric and Andrew, enjoying their weekend getaway with their cute-as-a-button adopted Chinese daughter, Wen. She’s happily engaged in catching grasshoppers, out of sight of her parents, when the first stranger, Leonard, comes walking up the road to engage her. He has friends, who will be showing up to subdue her two daddies in just a moment.

The newcomers, strangers who claim to have not known each other until a couple of days earlier, will report that they have been delivered of a revelation, either divine or demonic: the world will end unless this random loving family of three can be induced to willingly perform an act of profound evil. There will be ambiguous indications before the end that this ultimatum is not bullshit, that the price of the three not capitulating will indeed be global catastrophe. But there are possible mundane explanations, too. Andrew, an academic, is particularly insistent on those. Eric is not so sure. And as the confrontation between the home invaders and their captives turns increasingly violent, spattering that isolated cabin with the kind of stains that will simply never come out, that ambiguity only increases.

It’s a short novel by today’s standards, occupying a very compressed period of time, and Tremblay fills the space by relating its various sections in intense sensual detail, from the point of view of characters who include Eric, Wen, and a couple of the invaders. It all becomes less a simple survival story than something more cosmic and horrific. Heartbreaking, of course. The characters go through hell and experience bloody horrors, one in particular, that raise the question we started with: ultimately, can this escape the trap of being just masturbatory darkness? Is this pure nihilism and nothing else, or will we ultimately arrive at a place that justifies such a nasty journey?

The answer comes down to the very last few paragraphs. It’s not a “surprise ending,” so those of you who like blowing those for yourselves can refrain from looking. It is, however, the destination point at which the cataclysmic and the personal contract to a singularity, illustrating the way humanity endures and responds to the unspeakable. The whole, superb nightmare of a book comes down to that single moment, and—I contend—exists only because of that moment, one that is currently frustrating a tremendous number of reviewers on Amazon.

It is the answer to the question that my workshop colleague wrote in the margins of that manuscript, so many years ago: “Is this trip necessary?”

The difference between the two stories is that Paul Tremblay’s takes a noble stab at providing the answer.